Zoom Video Communications CEO Eric Yuan has extended the scorching pace of his wealth accumulation after the company's results came in well ahead of expectations.

Yuan's net worth soared by $US6.64 billion ($9 billion) as shares of his virtual-meeting company surged 41 per cent to $US457.69 in New York following its bumper results. The boost lifted the chief executive officer's fortune to around $US23 billion, according to the Bloomberg Billionaires Index. 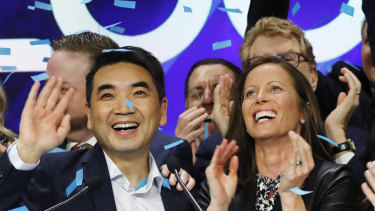 The founder of the California-based company, whose net worth is mostly made up of his more than 50 million Zoom shares, is one of the biggest gainers this year. Yuan, 50, has seen his fortune grow by $US19.5 billion in 2020.

Zoom has been one of the clearest beneficiaries of the coronavirus pandemic, with businesses and educational institutions turning to the service to work and teach remotely.

The software maker reported on Monday (US time) that sales jumped 355 per cent to $US663.5 million in the three months through July 31 from a year earlier. It was the second-largest surge among Nasdaq 100 Index members last quarter, only behind biotech firm Moderna, data compiled by Bloomberg show. Zoom said sales will be as much as $US2.39 billion in the fiscal year ending in January, meaning revenue would almost quadruple in just one year.

At the current level, Zoom's market value exceeds the combined value of two storied automakers, General Motors and Ford, and is more than double the aggregate value of the nation's four biggest airlines. 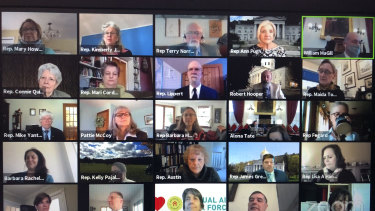 Zoom has been one of the clearest beneficiaries of the coronavirus pandemic, with governments, businesses and educational institutions turning to the service to work and teach remotely.Credit:AP

"I'm at a loss for words," said Rishi Jaluria, an analyst at DA Davidson who is bullish on the stock. "After Q1, my colleagues and I said this is one of the best quarters in software history. How do you follow this up? I think they've done it. Outside of the massive acceleration in growth, the biggest positive surprise is how much profitability is going to the bottom line."

Zoom gave a forecast suggesting the explosive growth will continue. The company said sales will be as much as $US2.39 billion in the fiscal year ending in January – meaning revenue would almost quadruple in just one year. Analysts, on average, expected sales of $US1.81 billion. Zoom previously projected fiscal-year revenue of $US1.8 billion.

It's been a year filled with eye-popping rallies for the richest names in the tech world – Amazon.com Inc.'s Jeff Bezos saw his net worth grow by $US13 billion in one day in July, and Tesla's Elon Musk added $US8 billion in 24 hours last month. Both men have reached record levels of wealth, with Bezos crossing $US200 billion and Musk surpassing $US100 billion last week.

A concise wrap of the day on the markets, breaking business news and expert opinion delivered to your inbox each afternoon. Sign up for the Herald‘s here and The Age‘s here.