Retail giant Woolworths has launched a $2 billion share buyback following the demerger of its drinks business Endeavour and a bumper year for sales and profits at its supermarkets.

But chief executive Brad Banducci has warned the COVID-19 would continue to have a “profound impact” on the company across the current financial year as the Delta variant continues to spread across Australia. 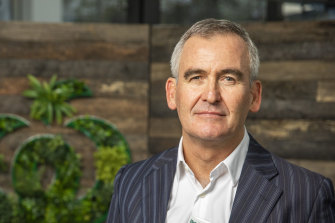 Shareholders will be paid a final dividend of 55 cents per share, up from 48 cents last year, and will also be able to participate in a $2 billion share buyback. Woolworths first announced it was looking for ways to return capital to shareholders after its $10 billion demerger of drinks division Endeavour.

The retailer has been a major beneficiary of the pandemic due to ongoing panic buying and overall heightened sales as supermarkets remained open throughout the country’s lockdowns.

Sales have remained elevated in the new financial year, with both NSW and Victoria locked down battling Delta outbreaks. For the first eight weeks of the year, total food sales increased 4.5 per cent, Mr Banducci said, though the company’s department store division, Big W, has seen sales fall 15 per cent over the same period as its stores are closed through the lockdowns.

COVID-related restrictions have already cost Woolworths $41 million since the start of July, and Mr Banducci said the company was prepared to live with the impact of the virus for some time.

“While we are excited by what the future holds, we are realistic about the challenges that lie ahead in the next few months as we support vaccination and respond to the volatility and challenges that Delta is causing on a daily basis,” he said.