In 2016, Vermont Sen. Bernie Sanders won Michigan’s Upper Peninsula handily. He won 14 of the 15 counties in the region and lost the 15th by just 30 votes. It was one of a smattering of white, conservative, rural regions around the country, many of them reliably Democratic until recently, where Sanders was able to top eventual Democratic nominee Hillary Clinton.

Sanders’ victories in these places ― also see West Virginia, Kansas, North Dakota and Little Dixie in southeastern Oklahoma ― gave him delegates in his one-on-one battle against Clinton and provided a powerful argument for the Democratic Party’s left wing.

Over the past four years, progressives have argued that the 2016 primary results showed white working-class voters in rural areas were more ready for Sanders’ progressive revolution than they were interested in Clinton’s center-left incrementalism. Sanders’ supposed strength with voters in the Rust Belt and Appalachia, most of whom rejected Clinton and former President Barack Obama, was at the core of the “Bernie would have won” argument from 2016.

This year’s primaries have painted a much different picture. On Tuesday night, Biden cruised to victory in the Upper Peninsula. As of 11 p.m. Eastern, he was winning every county in the Upper Peninsula. In Mackinac County, where Sanders had won with 55% of the vote four years earlier, Biden was winning by an identical margin and was 20 percentage points ahead of Sanders. In Gogebic County, Biden had a 30-point lead over Sanders, who had won the county by 7 percentage points in 2016. 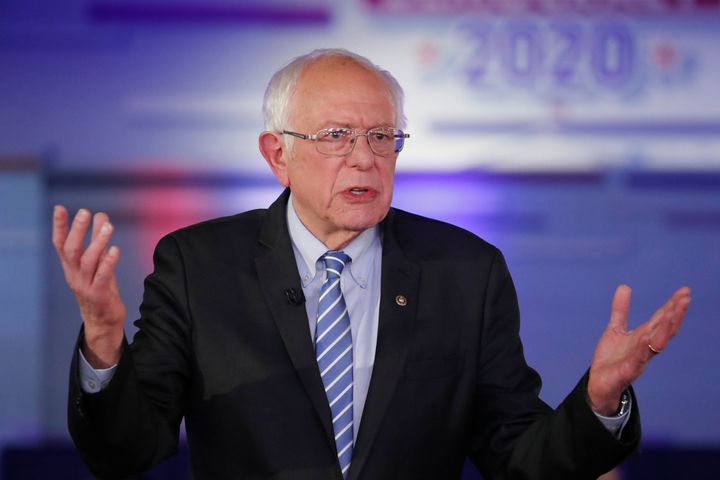 The 2020 results suggest there are major limits to Sanders’ appeal to the rural white voters who live in these regions, and that his 2016 successes may have been due as much to Clinton’s decades of political baggage as to a thirst for Sanders’ progressive policies like “Medicare for All” or a $15 per hour minimum wage.

“People had made up their minds about Hillary Clinton, and there was a large segment of the Democratic electorate who had made their choice,” said Mark Longabaugh, a Democratic media consultant who worked for Sanders’ campaign in 2016. “There were a lot of more rural, older, conservative voters who moved towards [Sanders].”

Michigan state Rep. Sara Cambensy held on to a Democratic-controlled district centered around Marquette ― a 21,000-person city that is the Upper Peninsula’s largest ― in a 2017 special election with the help of a get-out-the-vote robocall from Biden. She said her constituents, many of whom work at two iron mines just outside the city, felt connected to the former vice president in a way they didn’t with Clinton and were skeptical of Sanders’ most ambitious proposals for free college and Medicare for All.

“I think people were looking for someone that didn’t have the establishment connections, and someone that could talk to them in an honest voice,” she said of Sanders’ victories there four years ago. “This time, even though Vice President Biden has been around in Washington, there’s still that honesty when he speaks.”

“For rural Americans, there’s a difference between speaking at you and speaking to you. And Vice President Biden has a way of speaking to us,” said Cambensy, who endorsed Biden. (Biden won Marquette County by a 50% to 42% margin.)

Sanders’ relative decline in rural areas has been apparent since the New Hampshire primary. While he won nearly two-thirds of the vote in rural areas against Clinton in the Granite State in 2016, exit polls showed him winning 26% of the rural votes in 2020, barely edging out two moderate candidates ― former South Bend, Indiana, Mayor Pete Buttigieg and Minnesota Sen. Amy Klobuchar.

The pattern of weaker performances with rural voters repeated itself on Super Tuesday. Four years ago in Oklahoma, Sanders had dominated “Little Dixie,” a collection of counties in the southeastern corner of the state that were settled by southerners and had been unflinchingly Democratic for decades before slowly flipping to GOP control during the Clinton and Obama administrations. In Pittsburg County, one of the region’s largest, Sanders won 56% of the vote to Clinton’s 32%.

Still, the appeal of economic populism in these areas shouldn’t be totally discounted. Cambensy said trade deals like the North American Free Trade Agreement remain unpopular in her district, even if Biden wins there. Longabaugh said the divided Democratic field forced Sanders to double down on his ideological base, making him a more polarizing figure.

For instance, Sanders has adopted the furthest-left positions on immigration of any major candidate, including the abolishment of Immigration and Customs Enforcement.

“I think Bernie’s message on economics and kitchen table issues, on trade and $15 minimum wage, that message is resonant,” Longabaugh said. “Where he gets into trouble with those voters is on social issues. Bernie, over the course of that campaign, has been pulled off the economic message to talk about things like [Fidel] Castro.”

There are other reasons Sanders’ advantage over Clinton melted away when facing Biden. The most obvious is Clinton’s gender, with many conservative Democrats disinclined to vote for a woman. (Four years earlier, Clinton had won in some of these areas because the same conservative Democrats were also disinclined to vote for a Black man in Barack Obama.)

And exit poll after exit poll has shown that with Trump already in the White House, voters care far more a candidate’s ability to winning the general election than their ideology. Some voters who might otherwise like Sanders’ politics could believe the former vice president is a safer bet to defeat Trump.

Just 11% of Michigan voters in 2016 said “electability” was the top candidate quality they were looking for, according to exit polls. While the exit polls didn’t ask an identical question in 2020, 57% of Michigan voters said it was more important for Democrats to pick a candidate who can beat Trump, while 38% said it was more important for the party to pick a candidate with the right policy positions. Of the voters who prioritized beating Trump, 63% backed Biden.

While Tuesday night’s results are likely to give Biden a substantial ― and perhaps insurmountable ― delegate lead, Sanders could stage a comeback with these voters in later states like Ohio, Wisconsin, West Virginia or Kansas. But it will be an uphill climb.

“In rural Michigan, we want change, but we’re not looking for a revolution,” Cambensy said.