Illinois Gov. J.B. Pritzker has been trying desperately to acquire ventilators for his state’s hospitals, even getting on the phone with manufacturers personally.

But in one recent conversation, Pritzker said, a CEO told him that Illinois might have to wait for the life-saving breathing machines ― not because the company wasn’t producing them, but because the company might sell the newly assembled units to a foreign customer first.

As the governor tells the story, the CEO advised Pritzker to place a big order so Illinois would be “higher on the list of priority.”

“I’m competing with countries outside the United States to get things that we need,” Pritzker said at a press conference on Monday.

Pritzker, a Democrat, might have left out some context to the conversation and, even if he didn’t, he’s just one governor. But there’s plenty of reason to think his tale is emblematic of what’s going on all over the country, as state officials and health system administrators struggle to provide hospitals with the equipment they need to treat COVID-19 patients.

Ventilators, portable X-ray devices, COVID-19 test reagents, masks and gowns ― all are in short supply in at least some parts of the U.S.

“We need the product now,” Andrew Cuomo, New York’s Democratic governor, said on Sunday. “We have cries from hospitals around the state. I’ve spoken to governors around the country, and they’re in the same situation.”

The federal government could intervene using its authority under the Defense Production Act, a 1950 law that gives the president legal power over industrial production like Franklin D. Roosevelt had in World War II and Harry Truman wanted during the Korean War. But the decision to use that authority would have to come from President Donald Trump, and so far he has mostly resisted, saying the private sector is doing enough on its own.

An increasingly loud chorus of officials and public health experts disagree. They say the federal government needs to take more control over the production and supply of medical equipment ― and some wonder why Trump didn’t take this action weeks ago when it could have had a much bigger impact.

What This 1950 Law Actually Does

Through a series of reauthorizations and executive actions, the Defense Production Act has evolved so that presidents can now use it for all kinds of crises, including natural disasters. In 2001, for example, President George W. Bush used some of its powers to make sure material for power generation and transmission got to California during a wave of blackouts.

In popular lore, the Defense Production Act lets the federal government commandeer factories so that they start churning out equipment for war or some other kind of emergency. But that’s not quite how it works.

Instead, the law gives the president a set of narrow but powerful tools for organizing and increasing the production of goods necessary to address a national crisis. 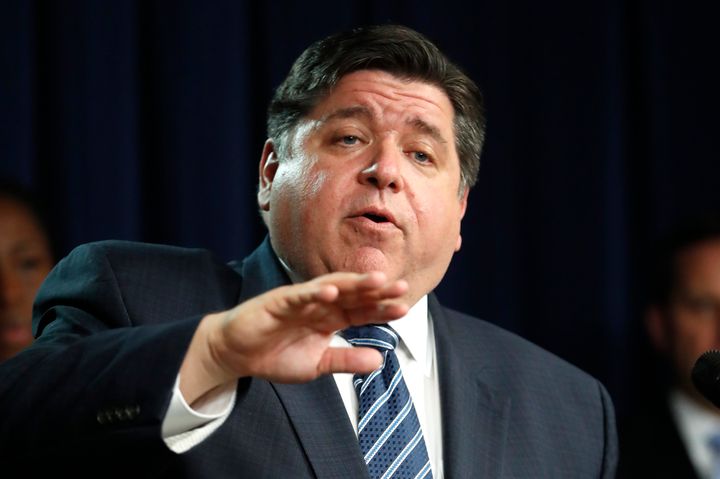 These tools include emergency authority for the federal government to make purchases, or offer loan guarantees for purchasers, in order to create a demand for goods that manufacturers might not otherwise produce. This is precisely the sort of financial commitment that many experts have said would give industry incentive to ramp up production of the medical equipment in such short supply right now.

Under another part of the Defense Production Act, the president can issue a declaration that certain goods are essential, which gives federal contracts priority over other orders. This is precisely what Pritzker couldn’t do when he was on the phone with that ventilator manufacturer.

The same provision also protects against price gouging, by allowing the federal government to insist that manufacturers sell goods at no more than the production cost plus a modest markup.

In extreme cases, the law allows the federal government to place equipment inside factories in order to produce goods that vendors would not produce on their own. That comes a lot closer to commandeering, but it doesn’t seem to be what public officials are proposing for the COVID-19 pandemic.

Even so, the prospect of giving the federal government more control over production spooks the corporate community and its allies. The U.S. Chamber of Commerce and other business groups have lobbied the Trump administration not to use the Defense Production Act, according to reports in The New York Times and The Wall Street Journal.

Why Trump Has Resisted Using The Law

Last week Trump announced that he was invoking the law, in apparent defiance of the lobbying from business. But “invoking the law” means nothing if the president doesn’t actually use the authority or direct federal agencies to do so.

For the most part, Trump hasn’t taken these steps. As of Tuesday, the administration had announced only two moves: one authorizing the Justice Department to crack down on hoarding of supplies to jack up prices, and another to obtain 60,000 COVID-19 tests.

“The Defense Production Act is not self-executing,” explained Katrina Mulligan, managing director for national security and international policy at the Center for American Progress. “Invoking it doesn’t on its own accomplish anything. You have to have another set of orders.”

Trump has also said that using the authority is not necessary because the private sector is acting on its own and the mere threat of the Defense Production Act is enough to give him leverage in negotiations. To back up these claims, federal officials have cited examples of individual corporations coming forward to increase production of medical equipment and supplies.

Companies really are volunteering to help. General Motors and Ford, for example, are working with existing device manufacturers, and Ford, in particular, said it’s partnering with General Electric, which already makes ventilators, to build units in idling automobile plants.

These efforts could have an impact, especially if the auto companies can help existing ventilator manufacturers get their hands on essential, hard-to-find components. But it will take time for Ford’s factories to retool and the CEO said on Monday that he thought the earliest machines could roll off their production lines was June.

What Is Actually Happening Now

“I will contract with a company for 1,000 masks,” Cuomo said on Sunday. “They will call back 20 minutes later and say the price just went up because they had a better offer and I understand that. Other states who are desperate for these goods literally offer more money than we were paying. And it is just a race that is raising prices higher and higher. We even have hospitals competing against other hospitals.”

“You’re basically putting these manufacturers instead of the government in the position of deciding who gets what first,” said Mulligan, who was director for preparedness and response in the Justice Department’s National Security Division from 2017 to 2018. 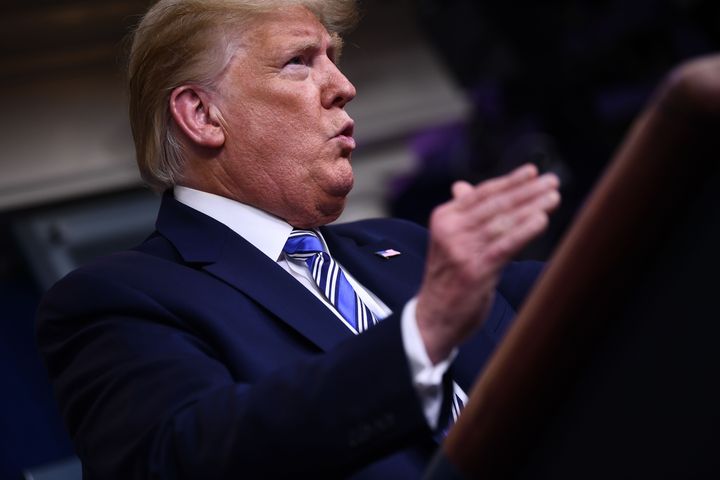 “Trump … turned the 50 states against each other,” Juliette Kayyem, who served as assistant secretary for intergovernmental affairs at the Department of Homeland Security during the Obama administration, told HuffPost. “That’s not a great unity-of-effort plan.”

A group of governors, including Cuomo and Pritzker, has called on Trump to fix this by using the Defense Production Act, rather than just invoking it. And they have allies on Capitol Hill.

A new Senate bill from Democratic Sens. Tammy Baldwin of Wisconsin and Jeff Merkley of Oregon would instruct the president to make purchases of protective equipment under the law. A House counterpart calls on Trump to “make urgent use” of the law.

The House bill is bipartisan and one of its Republican co-sponsors, Rep. Fred Upton of Michigan, told the Detroit News that he rejects the idea that using the law amounts to nationalizing industry. It would merely “allow the government to direct businesses to make certain supplies that are desperately needed in our fight against the coronavirus,” Upton said. “The companies would remain private.”

Why This Is All Happening So Late

The ultimate impact of using the Defense Production Act would depend on several unknown variables, including the magnitude of existing supply shortfalls and industry’s ability to make up for them. That is why the first step in a crisis like this is typically to make a formal assessment of existing supplies, possible needs and industry capacity.

That may be happening now. In just the last week, during the daily White House briefings on the pandemic response, Pence has mentioned several times that the federal government is overseeing a nationwide inventory of ventilators. At Tuesday’s briefing, he even had some specific statistics on shipments of goods to cities and states.

But this has all happened at a time when patient surges are already pushing hospitals in Detroit, New Orleans, New York and Seattle to the brink.

It didn’t have to take this long. Intelligence agencies were warning the White House about a pandemic crisis as early as January, The Washington Post has reported. By early February, members of Congress like Sen. Chris Murphy, a Democrat from Connecticut, were calling out Trump publicly, on Twitter, for not taking the danger seriously and making advance plans.

If the administration had approached the auto industry back then, for example, Ford could be retooling its factories already and rolling ventilators off the assembly line in the next few weeks.

And it wasn’t just early warnings that the administration downplayed or refused to heed. Trump initially resisted declaring a national emergency because, according to a report in Politico, he feared the optics would rattle Wall Street and undermine his claims that the pandemic was under control in the U.S.

That declaration, which Trump finally issued on March 13, empowered the Federal Emergency Management Agency to direct crisis response, which may have been what finally prompted the federal government to take more aggressive action on equipment and supplies. But even now, Trump seems reluctant to take charge.

When asked about the struggles to get supplies in the states, Trump has said governors should keep hunting for equipment on their own. At one point, he insisted that it’s not his job or the federal government’s to be a “shipping clerk.”

An alternate view is that taking control of the production and distribution of medical supplies in a crisis like this is precisely why the federal government has emergency powers at its disposal. Of course, those powers mean nothing without a president willing to use them.