Vice President Kamala Harris “may go to the border” “at some point,” the White House said Tuesday, as the vice president faces criticism for not yet visiting the southern border after being tapped by President Biden to handle the “root causes” of migration.

Harris, during an interview with NBC on Tuesday morning, said “we’ve been to the border,” despite not having visited the border herself.

White House press secretary Jen Psaki on Tuesday defended Harris’ comments, saying “as vice president, she does speak for the actions of the people in the administration she certainly helps oversee.”

“I expect, at some time, she may go to the border, but as you know, what her focus has been, what the assignment is, specifically, is to work with leaders in the Northern Triangle,” Psaki said. “She’s on a trip doing exactly that, exactly what the president asked her to do.”

When asked again, Psaki said “at some point she may go to the border, we’ll see.” 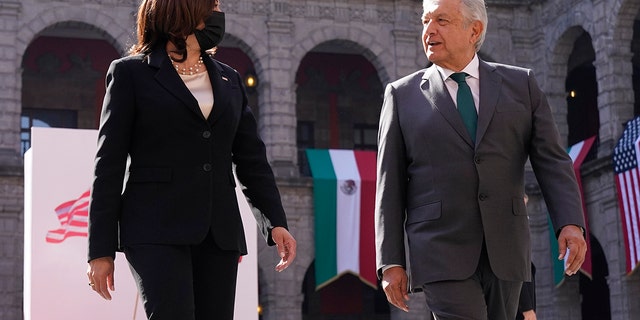 “She’s in the Northern Triangle now to have discussions with leaders – community leaders, civil society leaders, with the embassy, about how we can work together,” Psaki explained, saying that Harris is working on ways to “address corruption, the root causes, how to address humanitarian challenges in these countries.”

“That’s exactly what she’s doing on the ground and I’m sure she’ll report back to the president when she returns,” Psaki said.

Harris has come under heavy criticism from Republicans for the way she has handled the role since being appointed to it 75 days ago. While the White House has emphasized she is not tasked with the border per se, Republicans have criticized her repeatedly for not having visited the border at all – with former Trump officials saying she needs to go to the border in order to be able to conduct the talks effectively.

During the interview with NBC News on Tuesday, Harris was asked whether she had any plans to visit the border, to which she replied: “I – at some point – you know – we are going to the border. We’ve been to the border.”

During the interview, NBC’s Lester Holt reminded the vice president that she has not been to the border while in office.

“I – and I haven’t been to Europe. And I mean, I don’t – I don’t understand the point that you’re making,” Harris said, adding “I’m not discounting the importance of the border.”

“Listen, I care about what’s happening at the border,” Harris said, noting that she is “in Guatemala because my focus is dealing with the root causes of migration.”

“There may be some who think that that is not important, but it is my firm belief that if we care about what’s happening at the border, we better care about the root causes and address them,” she added. “And so that’s what I’m doing.”

Meanwhile, Harris, during a press conference alongside Guatemalan President Alejandro Giammattei told potential migrants that they should not travel to the U.S.-Mexico border – claiming that they would be turned back if they did.

“I want to emphasize that the goal of our work is to help Guatemalans find hope at home, at the same time I want to be clear to folks in this region who are thinking about making the dangerous trek to the United States-Mexico border – do not come, do not come,” she said.

Harris, on Monday, seemed to be attempting to make clear that message, and said migrants would be turned back as she sought to present a tougher stance on illegal immigration.

“The United States will continue to enforce our laws and secure our border,” she said. “There are legal methods by which migration can and should occur but we, as one of our priorities, will discourage illegal migration and I believe if you come to our border you will be turned back.”

The White House, on Tuesday, seemingly clarified Harris’ comments, saying they encourage those who would like to come to the U.S. to “do so legally.”

“The president and vice president have been clear in dissuading people from making the dangerous and treacherous journey to the U.S./Mexico border,” Symone Sanders, senior adviser and chief spokesperson to the vice president, said in a statement Tuesday morning.

“We encourage those who do want to come to the U.S. to do so legally and seek legal immigration options in their home countries,” Sanders continued. “The vice president is committed to addressing the root causes of migration, which also addresses why migrants are coming to our border.”

The White House says they have been clear on that policy – noting that during the transition, Ambassador Susan Rice and national security adviser Jake Sullivan reiterated that now was not the time to come to the U.S., and noting that President Biden in March said something to the same effect, while Homeland Security Secretary Alejandro Mayorkas has urged migrants to pursue legal immigration channels.

However, the administration has not applied Title 42 to unaccompanied children, of which there were more than 13,000 that arrived at the border in April, and it is not returning migrant families with children under 7 to Mexico due to the country’s refusal to take them – meaning that significant numbers of families are not being turned back, and are being released into the U.S. interior.