Universities face major financial losses after the government's ongoing ban on non-citizens travelling from China prevented 100,000 students from arriving in Australia for the start of the academic year. 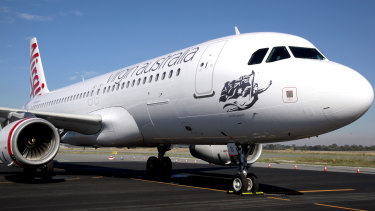 The vast majority of the students remain stuck in China although some have been arriving in Australia after waiting out their 14-day isolation period in third countries. The window is rapidly closing for students to arrive in time to participate in first semester studies on the ground in Australia.

The government has been considering easing the ban for students, subject to public safety assurances, and already airlines are preparing special flights to bring their students to Australia.

A Virgin Australia spokesman confirmed it had been approached by a charter broker to operate three flights for foreign students.

Enough crew members volunteered to operate the flights between Guangzhou and Brisbane, which could carry around 750 passengers in total.

An email sent to staff seeking volunteers, obtained by this masthead, said the airline was "still working with the client and Australian government authorities to coordinate the requisite approvals, so the schedule is still somewhat fluid".

A spokesman for the University of Melbourne said the institution was "planning for a number of strategies and scenarios" and working with governments and other universities.

"No final decisions have been made," the spokesman said.

University sources said there had been ongoing discussions with a range of airlines, including Qantas, Cathay Pacific and major Chinese carriers.

Crew on the Virgin flights would wear P2 face masks and gloves which would exempt them from self-quarantine on return to Australia, the email to staff says, but they would nonetheless be put on 14 days paid leave when they arrived home.

Virgin crew were told that people from Hubei province – the epicentre of the coronavirus outbreak – would not be allowed on the flight, and that the risk of infection in Guangzhou was "very low", accounting for less than 1.5 per cent of the COVID-19 cases in mainland China.

"We stand ready to assist, however operating these flights will depend on current travel restrictions," the Virgin spokesman said.

"Should the flights proceed, we’ll work closely with the Australian government and health authorities on a range of measures to ensure the health and safely of passengers and our crew."