Uber Technologies spent heavily to lure drivers back in the second quarter, which resulted in a wider loss than expected and raises doubts about the reliability of its labour model long-term. Shares declined 8 per cent in extended trading on Wall Street.

The loss before interest, tax and other expenses was $US509 million ($689 million) in the period that ended in June, Uber said in a statement on Wednesday. That’s wider than the prior quarter but narrower than a year earlier. Analysts expected a loss of $US325 million, according to an average of estimates compiled by Bloomberg. 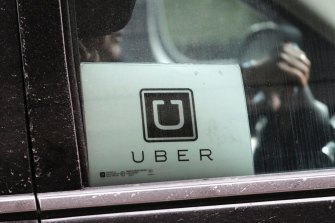 Many Uber drivers quit earlier in the pandemic when demand evaporated and over concerns for their own health.Credit:AP

Uber said the operating loss will be less than $US100 million in the third quarter and that gross bookings will be $US22 billion to $US24 billion. The forecast is about in line with analysts’ estimates. Uber cautioned that a wider outbreak of the Delta variant of the coronavirus could change the results.

“We invested in recovery by investing in drivers, and we made strong progress,” Uber Chief Executive Officer Dara Khosrowshahi said in a statement.

Expectations for Uber were already lessened on Wednesday after its rival Lyft, the second-largest US ride-hailing company, reported a weak forecast for the third quarter. Both stocks declined during trading. Lyft did prove, however, that its business can be profitable, at least when overlooking stock-based compensation and other costs. Lyft turned its first adjusted profit in the second quarter. Uber said it’ll generate a quarterly adjusted profit by the end of the year.

Uber has been using the pandemic as an opportunity to expand further beyond rides. The San Francisco-based company placed a big bet on freight with the $US2.25 billion purchase of Transplace last month. It also moved into grocery and alcohol delivery through acquisitions, added package delivery and struck a partnership with GoPuff to ferry convenience store items.

“What we’re looking for is continued expansion beyond food,” said Ron Josey, an analyst at JMP Securities. “The battleground that’s developing is to get anything delivered within an hour or two.”

Uber has been delivering meals from restaurants since 2014, but the pandemic dramatically accelerated growth. Gross bookings from delivery orders in the second quarter nearly doubled from the same period last year to $US12.9 billion. Growth was muted compared with the first quarter. “The hyper growth is likely over,” Mandeep Singh, an analyst at Bloomberg Intelligence, wrote in July.

Second-quarter sales doubled from a year earlier to $US3.93 billion, beating analysts’ estimates. The number of people using an Uber service was 101 million in the second quarter, in line with estimates.

Uber posted its first net profit as a public company in the second quarter. Income of $US1.1 billion was driven in large part by Uber’s stock in Didi Global, China’s largest ride-hailing company which went public in June. Since then, the shares have declined 30 per cent after Beijing launched a probe into the company and removed Didi from Chinese app stores.

Khosrowshahi said Uber will consider selling Didi shares or other holdings, which are valued at nearly $US15 billion and also include Southeast Asia’s Grab Holdings and Joby Aviation. He singled out Didi as more of a financial interest than a strategic one. “We don’t intend to run an investment firm, but we have sufficient liquidity to ensure that we have the flexibility to maintain those positions,” Khosrowshahi said in a conference call with analysts on Wednesday.

Challenges in the ride-hailing business persist. Many drivers quit earlier in the pandemic when demand evaporated and over concerns for their own health. In recent months, vaccines have brought riders back, but the return of workers hasn’t kept pace.

Uber said in April it would spend $US250 million to get more drivers on the road by doling out bonuses and other incentives. Now, the spread of the Delta variant creates a new, unpredictable problem for the transportation business.