WASHINGTON — They wanted Donald Trump to come to Washington to break things. Turn over tables. Shake up the system.

To his most avid supporters, the president has done all these things, and they’re not about to let his handling of the coronavirus — and potentially the thousands of extra deaths it could cause — change their minds.

“It sounds callous, but maybe that’s population control,” said Linda Moreno, 66, pointing out that the disease is most deadly to the elderly, such as herself.

She and her husband, a Vietnam War veteran, are retired and travel the country in their RV, hitting as many Trump rallies as they can. They attended the July 4 event Trump staged on the National Mall last year, a rally in Minneapolis in October and one in Phoenix last month.

Like many of his supporters, they believe that concerns about COVID-19, the disease caused by the virus, are overblown, despite Trump’s recent 180-degree shift on the subject.

“I really don’t know how contagious this thing is. It does seem like we’ve overreacted to a point,” said Stephen Moreno, 69, adding that they nevertheless returned to their Chino, California, home and are abiding by the guidelines to stay away from others. “I’m in that high-risk category. And it’s driving me nuts. I’d rather be out.”

Trump downplayed the seriousness of the virus for six weeks after its rapid spread started raising concerns globally. He falsely claimed it was no worse than the seasonal flu, predicted without any scientific basis that it would disappear on its own come April and accused Democrats and the news media of trying to tank the stock market to hurt his reelection chances.

That unwillingness to prepare for its inevitable spread in the United States cost the country precious weeks that it could have spent aggressively ramping up the production of coronavirus tests and increasing intensive care capacity at the nation’s hospitals, pandemic experts said.

All this came two years after Trump dismantled the pandemic response team that his predecessor Barack Obama had created within the White House. Trump justified that move three weeks ago as a desire to save money — “Some of the people we cut, they haven’t been used for many, many years” — and falsely claimed he could hire them all back quickly if needed. 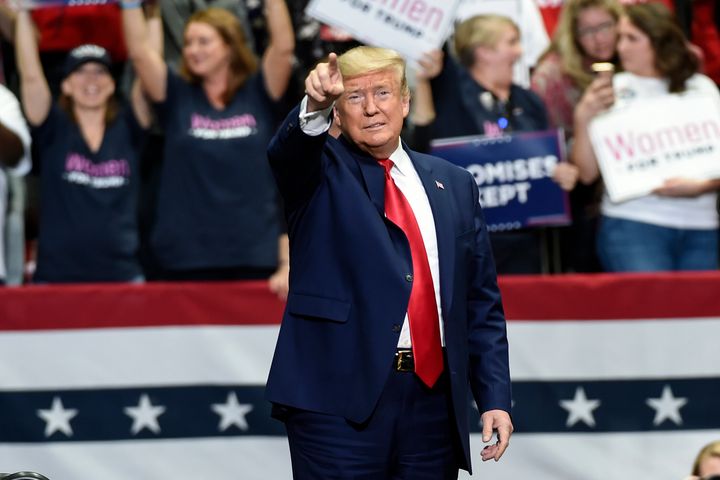 Rick Tyler, a political consultant who worked for Texas Sen. Ted Cruz’s bid for the 2016 Republican presidential nomination, said Trump’s performance in this crisis will have consequences this November.

“If the coronavirus spread is as bad as it’s been in Italy, the election will only be about the competence of the federal response, which to date Trump has completely bungled,” Tyler said. “He lacks the knowledge and leadership to offer any useful information. His mostly irrelevant or non-factual statements have only added to confusion, panic and destabilization. Trump should not attend press briefings, tweet or issue statements about coronavirus. He should let the professionals do their work keeping Americans healthy and safe.”

John Weaver, who worked for former Ohio Gov. John Kasich’s campaign in those primaries, said Trump won the benefit of the doubt in 2016 from some voters who heard the arguments that he was not qualified to deal with serious crises but supported him anyway because of their dislike of Democratic nominee Hillary Clinton. “In 2016, for all intents and purposes, Secretary Clinton was treated as the incumbent and Trump was the theory. Well, the madness theory is now a fact,” Weaver said.

Trump’s defenders, though, argue that as sitting president, he can project “big, bold, strong leadership” that voters will like, even if he is not as detail-oriented as previous presidents. “You need some of that unconventional leadership,” said Jason Miller, a top official in Trump’s 2016 campaign and an outside adviser now. “If President Trump can continue leading us through this crisis, voters are going to reward him and he’s going to be reelected.”

For many voters who backed Trump in 2016 and continue to back him now, that “unconventional” style is still attractive, even if it might lead to some poor decisions. They believe Trump is doing the best he can, and they doubt anyone else would have done much better — even Republican governors who had run against Trump in 2016 like Florida’s Jeb Bush or New Jersey’s Chris Christie, both of whom had experience guiding their states through natural disasters.

“I believe in an outsider. Career politicians are nothing but trouble,” said Norris Vivier, a 58-year-old owner of a real estate business in Manchester, New Hampshire, who has already had to lay off workers because of the pandemic.

He, like many Trump supporters, also wonders if the experts are not overreacting: “Destroy our economy and way of life over a virus?”

He added that, in any event, he is glad Trump is in charge. “Considering we’re in uncharted territory, given the choice between having him or some of the other options, I’d rather have him. … I don’t think necessarily that anyone would have handled it differently.”

Even those who see some of Trump’s habits as counterproductive nevertheless said they will continue to support him.

Barbara Guzman, who owns a label business in Cape Coral, Florida, and who saw Trump at a 2018 rally in nearby Naples, said Trump would be better off keeping his mouth shut and letting the experts in the government speak, rather than make a series of misleading or false statements that wind up needing to be corrected, thereby confusing the public.

“Sometimes he shouldn’t say anything,” she said, but then added that such a wish was not likely to come true. “It’s almost like a child. You tell him not to do something, but he does it anyway. … He’s 70-something. He’s not going to change.”