President Donald Trump reportedly told GOP donors that he sees an upside to the coronavirus crisis, believing that it will help him promote his political agenda and build support for closing off U.S. borders.

Trump was at his private Mar-a-Lago resort last weekend, along with a mix of donors attending the Republican National Committee retreat; friends celebrating the birthday of Kimberly Guilfoyle, who is dating Donald Trump Jr.; and a delegation from Brazil that included at least one person who later tested positive for coronavirus.

According to a GOP donor who spoke with The Washington Post, Trump seemed confident that he wouldn’t take any blame for mishandling the crisis and that there could even be a benefit to the pandemic ― a boost for his own political agenda:

At his resort that evening, Trump told the donors that “nobody is blaming us” for the virus, according to an account from another guest who asked for anonymity to quote the president’s private remarks. Despite big drops in the stock markets, the president seemed eager to spin the potential upside — that the closing of borders around the world would promote his “America First” agenda.

The White House did not immediately return a request for comment.

From the beginning, Trump has seemed to be more concerned about closing off borders than taking other measures to fight the disease. During his first address to the nation on the topic, he characterized it as a “foreign virus” and touted his travel restrictions with China. He has since closed the U.S. to visitors from 28 countries in Europe.

The Department of Homeland Security has also used the disease as an excuse to further restrict migration at the U.S.-Mexico border.

“Large, uncontrolled migrant flows to the U.S. that overwhelm our system and crowd our facilities presently pose a clear and present health risk to Americans,” DHS claimed in an update sent to lawmakers, according to The Wall Street Journal.

Trump and anti-immigration activists have long claimed that immigrants carry diseases into the United States.

The president still seems to believe that he bears no responsibility for the spread of the coronavirus ― even though he consistently tried to downplay its severity, saying it would simply disappear on its own by April.

As recently as Friday, when he held a press conference in the Rose Garden on his administration’s coronavirus response, he was not modeling best practices to avoid spreading the disease, standing closely with a group of people and shaking their hands. Trump acted surprised when one of the business leaders opted for an elbow bump.

The Centers for Disease Control and Prevention has advised people to minimize contact with each other.

“I don’t take responsibility at all,” Trump said during the press conference. 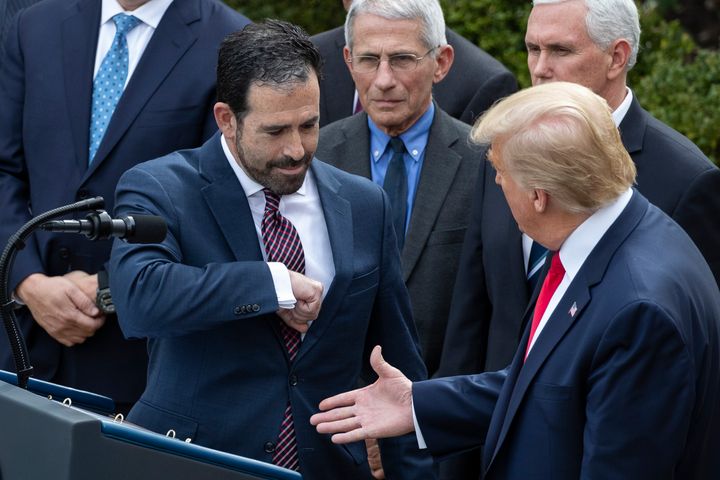 But the new restrictions, just announced Friday, have caused dangerous conditions at airports that could be leading to increased transmission of the disease. Footage from Saturday showed passengers packed into long lines, often waiting hours to get through screenings.