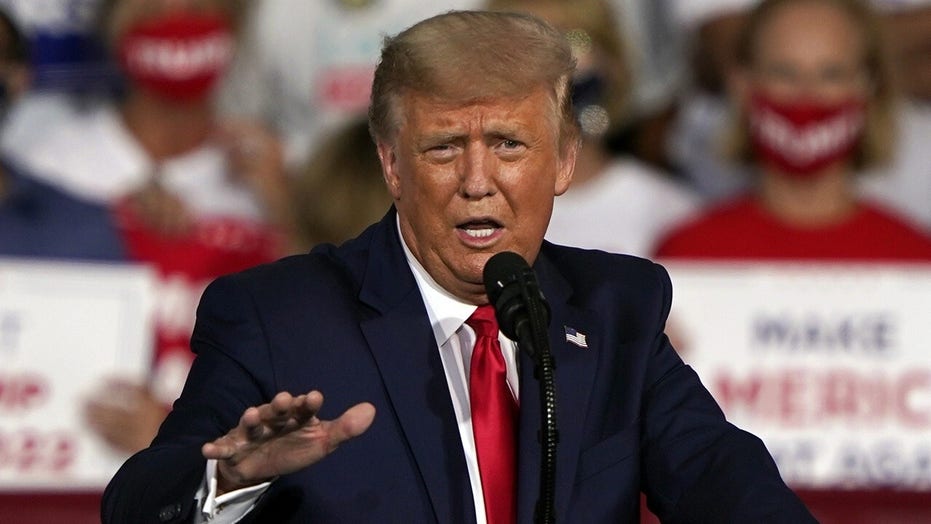 EXCLUSIVE: The Trump campaign and Republican National Committee raked in $210 million in August, an impressive haul that marks their biggest month to date – though still short of the record-smashing amount Democratic nominee Joe Biden and the Democrats brought in during the same time period.

The Biden campaign and Democratic National Committee announced last week that they had brought in an unprecedented $364.5 million in August.

A senior Trump campaign official told Fox News on Wednesday that the campaign, all told, has raised more than $1.3 billion since the beginning. The campaign's cash-on-hand figure was not clear.

"Both campaigns are raising massive amounts of money, but have very different priorities about how to spend it. In addition to advertising, President Trump's campaign has invested heavily in a muscular field operation and ground game that will turn out our voters, while the Biden campaign is waging almost exclusively an air war," Trump campaign manager Bill Stepien said in a statement to Fox News. "We like our strategy better."

Stepien added that the Trump campaign "will have all the resources we need to spread the message of President Trump's incredible record of achievement, on the ground and on the air, and define Joe Biden as a tool of the radical left."

Stepien went on to tout the president's record, saying he "built the world's best economy once and is doing it a second time, and will keep Americans safe."

"Biden has a terrible economic record, would kill the recovery by raising taxes by $4 trillion, and sides with criminals over law-abiding citizens," Stepien said. "This is a clear choice for voters, who will re-elect President Trump in November.”

But the Trump campaign’s August numbers come amid reports raising questions about the financial strength of the president’s campaign in the final stretch, compared with Biden’s. The New York Times this week reported that the campaign could be strapped for cash, amid a pullback in ad spending and other areas. 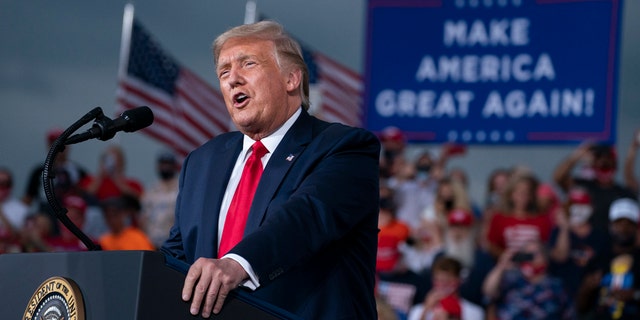 But Stepien downplayed those reports this week, saying he is “comfortable and confident” that money won’t be an issue.

“We are now carefully managing the budget,” Stepien told reporters on Tuesday.

Meanwhile, the president said he would spend his own money on his campaign, should it become necessary.

“If I have to, I would,” Trump said Tuesday. “If we needed any more, I’d put it up personally, like I did in the primaries last time.” He added: “Whatever it takes. We have to win.”

The president added: "This is the most important election in the history of our country."

For their part, the Democrats' record-setting fundraising in August was no doubt boosted by the highly anticipated announcement of the former vice president’s running mate in the run-up to the Democratic National Convention.

When Biden announced Sen. Kamala Harris, D-Calif., as his running mate, the campaign raised a whopping $48 million in the 48 hours following the announcement.

With Vice President Pence remaining as the president’s running mate, the Trump campaign could not leverage that type of surprise announcement for a fundraising boost. Still, the convention significantly helped their fundraising.

Meanwhile, a senior Trump campaign official noted that Trump was out-raised in 2016 by then-Democratic presidential nominee Hillary Clinton, who brought in $1.2 billion to his $646 million (including some of Trump's own money).

“We had the better candidate, the better message, and better grassroots enthusiasm then, just like we do now,” the official told Fox News. “Biden needs this money, because we had such an enormous head start on him.”

"We have spent money over the course of the last four years, building the campaign infrastructure and ground game," the official explained. "We have had a massive presence on the ground in battleground states for well over a year now, and that’s where a lot of our money has gone."

The official added: "These are things Joe Biden still has to do in a lot of places."

The official referenced Minnesota, a traditionally blue state that Republicans insist is in play for the 2020 cycle, saying that Clinton in 2016 didn't have to "spend a dime" in the state to win it, while Biden is "having to fight for it as a battleground state." The official also referenced New Hampshire and Nevada as a potentially similar scenario.

RNC Chairwoman Ronna McDaniel told Fox News on Wednesday that "enthusiasm for President Trump and our Party only strengthened in August as Americans know the economy, law and order, and American greatness are on the ballot this November.

"Thanks to early investments in field, digital and data, we have built the most sophisticated ground game in history," she continued. "Democrats simply cannot compete with our grassroots army of two million volunteers, and the millions of door knocks and phone calls we make each week will prove to be a critical advantage for President Trump and Republicans come Election Day."

“Last month we raised $364.5 million — 95% of the donations from grassroots supporters like you and the majority online. Working people are powering our campaign — and I'm grateful. We've got a long way to go to close the fundraising gap and win — but we can do it. Together," the former vice president touted on Twitter.

"He can have all the money in the world he wants, but he only has 54 days to spend it," the official said. "We've been doing this work for years."