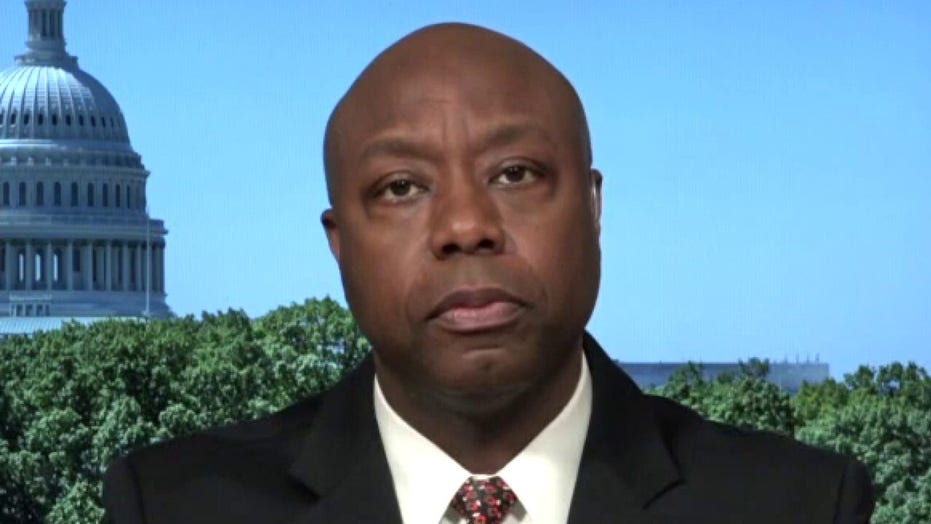 It’s no surprise that a new ad blitz by the Republican National Committee (RNC) targeting President Biden stars one of the GOP’s brightest stars – Sen. Tim Scott of South Carolina.

“A president who promised to bring us together should not be pushing agendas that tear us apart,” Scott, the only Black Republican in the Senate, says in the spot.

“Our best future will not come from Washington schemes or socialist dreams. It will come from you, the American people,” Scott emphasizes in the commercial, which the RNC says is being backed by a large seven-figure ad buy. “We are not adversaries, we are family. I am confident that our finest hour is yet to come.”

Scott, who’s been on an upward political trajectory since he was first elected to Congress in 2010, saw his star shine even brighter after delivering the GOP rebuttal to President Biden’s address to a joint session of Congress in late April.

After Scott’s address, RNC chair Ronna McDaniel said that “it was refreshing to hear my friend Sen. Tim Scott hold Joe Biden accountable for his record of failure and tell Americans the truth. Sen. Scott’s inspiring response outlined our winning Republican agenda, which will unite our nation and create more opportunities for every American.”

And McDaniel spotlighted that Scott’s “life is a testament to the American dream.”

The then-South Carolina state lawmaker was elected to the U.S. House in 2010. Three years later he was appointed by then-Gov. Nikki Haley to fill a vacant Senate seat, becoming the first Black Republican in the chamber in over 30 years. He won a special election in 2014 and in 2016 earned a full six-year term. Now he’s gearing up for his 2022 reelection campaign.

But it’s his inspiring story that’s helped him rise through the ranks and serve as a leading messenger for his party.

“Sen. Scott has a powerful, personal, story of overcoming a difficult childhood to becoming a United States senator. It’s a story that resonates with many Americans,” longtime Republican strategist Brian Walsh told Fox News. “Well-articulated vision of hope and opportunity based on common sense conservative principles has positioned him to be one of the strongest communicators in the Republican Party.”

And veteran GOP consultant Ryan Williams called Scott “one of the most compelling figures in the Republican Party today… He has the ability to connect with the type of working–class coalition that Trump put together to win the White House. He’s a very effective messenger for the party. He has a lot of credibility.”

But in a Fox News interview in April, Scott downplayed talk of national aspirations, saying that his “only objective is to be the United States senator for the great state of South Carolina.”

Scott sparked 2024 speculation in April, when he traveled to Iowa – the state that kicks off the presidential nominating calendar – to headline a state GOP fundraiser. 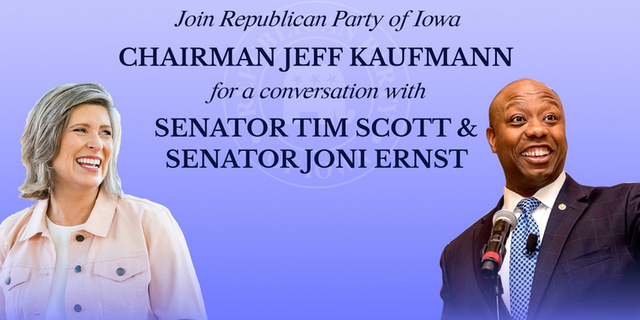 An invitation from the Republican Party of Iowa for an event with Sens. Tim Scott and Joni Ernst in Davenport, Iowa on April 15, 2021.

Iowa GOP chair Jeff Kaufmann, ahead of the senator’s trip, called Scott “a man of integrity” and “a man of action.”

“I think my folks out here just want to see him up front and personal,” Kaufmann told Fox News at the time. “To be real honest with you, I think they want to see the man behind the legend.”

And after his GOP rebuttal speech following Biden’s address, New Hampshire GOP chair Steve Stepanek told Fox News, “I’m going to be watching Sen. Scott because I think great things are before him.”