Prosecutors are angling to dig into Theranos founder's Elizabeth Holmes clandestine romance with the company's former president when she goes to trial on fraud charges, using the relationship to show that alleged deceptions at the blood-testing startup went well beyond faulty machines.

The alleged concealment of the relationship from investors, directors and employees, as well as from business partners including Walgreens and Safeway, is at the tail end of a list of 22 categories of information that might be used at trial, according to a letter from US prosecutors to defence attorneys. 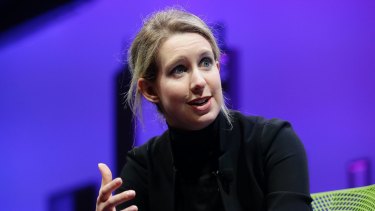 Holmes and Sunny Balwani "took steps to hide the existence of this relationship, such as commuting to work separately and avoiding being seen together outside of work," prosecutors said.

"On at least one occasion, when questioned by a journalist as to whether she was in a relationship, Holmes falsely stated that she was not."

Holmes' lawyers say the government's areas of interest reach "far afield" from the two wire fraud schemes she's charged with and "explodes" the time period from which evidence may be drawn. While the attorneys say they want to avoid delaying a trial set for August, they say the COVID-19 epidemic has only added pressure, making it dangerous if not unlawful for lawyers to interview witnesses and collaborate in person.

"The government's notice carries significant risk of expanding the scope of the trial beyond manageable bounds and impairing the defence's efforts to prepare for trial even if the bulk of the evidence were excluded," the defence said in a filing.

US District Judge Edward Davila in San Jose, California, decided this month that Holmes and Balwani, who were charged together, should be face separate trials. The case is closely watched in Silicon Valley where, before it unravelled due to alleged fraud, Theranos attracted the backing of some of the leading venture capital firms and achieved a valuation of $US9 billion ($14.7 billion).

Holmes and Balwani are accused of lying for years, claiming Theranos machines could perform myriad tests with a single drop of blood. Prosecutors alleged they duped investors out of hundreds of millions of dollars, and also defrauded doctors and patients who trusted Theranos test results.