Gregory Rigano has been everywhere lately. The night before President Donald Trump promoted a potential treatment for the coronavirus, the anti-malarial drug chloroquine, Rigano was on Tucker Carlson’s prime-time Fox News show heralding the supposed breakthrough involving the drug: “What we’re here to announce is the second cure to a virus of all time.” He was identified as an adviser to Stanford University School of Medicine. Rigano also appeared on Glenn Beck’s radio program this week, and Tesla founder Elon Musk tweeted out Rigano’s self-published paper about the effects of chloroquine.

But Rigano is not a doctor. Nor is he affiliated with Stanford’s medical school — it is actively trying to get him to stop saying he is an adviser. And his claims about chloroquine are unproven, often overstated and potentially harmful.

Rigano and his associate James Todaro have rapidly gained attention for their paper on chloroquine, self-published on Google Docs, which they claim to have written “in consultation with Stanford University School of Medicine, UAB School of Medicine and National Academy of Sciences researchers.”

Stanford University School of Medicine and the University of Alabama, Birmingham, School of Medicine told HuffPost that no one from their institutions was directly involved in Rigano and Todaro’s paper. The National Academy of Sciences was also not aware of any connection between Rigano or Todaro and the organization, according to a spokesperson. One UAB researcher requested that his name be removed from the paper after he was initially listed as an author and denied he had any knowledge of it or any part in its creation, he told Wired magazine in a Thursday profile of Rigano and Todaro.

Both Stanford Medicine and its SPARK Program in Translational Research, a drug development partnership with industry, also explicitly told HuffPost that Rigano is making a false claim about his affiliation with the university and have contacted LinkedIn to demand the company remove the university from his profile.

“Mr Rigano is not an advisor to the SPARK program and Stanford was not involved in his paper. We previously asked him to remove any reference to Stanford in his publication,” Daria Mochly-Rosen, the founder and co-director of SPARK at Stanford, told HuffPost.

Rigano and Todaro did not respond to multiple requests for interviews and comment for this article. 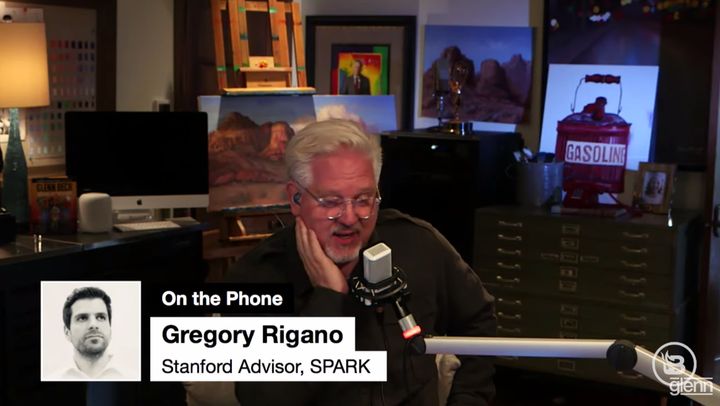 Rigano’s description of chloroquine’s effects is largely based on a single study from France that tested its use on a group of only 20 people. Six additional patients were also given the treatment but dropped out of the study before its completion: Three were transferred to intensive care, one died, one left the hospital and another stopped treatment because of nausea.

The study has been peer-reviewed and accepted to the International Journal of Antimicrobial Agents, which plans to publish it in the next day or so. The study’s corresponding author, Dr. Didier Raoult, did not return HuffPost’s requests for an interview and comment on whether he has been in communication with Rigano and Todaro.

Any drug requires extensive testing and clinical trials before it can be said to be effective, let alone that it is a “cure.” Initially promising drugs can also fail upon further testing. Although chloroquine could indeed be beneficial against COVID-19, the disease caused by the virus and prominent scientists have advocated for more research into its potential, medical experts also say there is no decisive proof yet that it can effectively treat the coronavirus.

“We certainly hope that chloroquine or hydroxy-chloroquine will be proven effective against COVID-19, but definitive evidence showing clinical benefit is lacking thus far and clinical trials are in progress,” Mochly-Rosen said.

One of the first people to note that Rigano and Todaro’s paper didn’t add up was Joan Donovan, director of the Technology and Social Change project at Harvard’s Shorenstein Center. She wrote on Twitter that there was a lack of original research and that the authors appeared to have more experience with blockchain and cryptocurrency than running clinical medical trials.

Even the paper itself has a massive disclaimer in it trying to distance the authors from any liability and damages it may cause, and stating “the authors and or its affiliates does not guarantee the accuracy of or the conclusions reached in this white paper, and this white paper is provided ‘as is’.”

Rigano’s LinkedIn profile lists him as “currently on leave” from a master’s program in bioinformatics at Johns Hopkins, while Todaro’s profile says he has a medical degree from Columbia University and is a “cryptocurrency investor and entrepreneur.”

Despite their questionable paper and lack of credentials, Rigano and Todaro have quickly become right-wing media darlings and had their claims amplified to millions. Their paper has been touted in Breitbart, the Washington Examiner and The Daily Wire, in addition to their appearances on Carlson’s and Beck’s shows. Their promise of a breakthrough flatters the agreed-upon storyline in conservative media that Trump has the outbreak under control.

Fox News gave Rigano and Todaro’s paper its most powerful platform when host Tucker Carlson aired a bizarre segment with Rigano on Wednesday night. Rigano praised Trump for cutting “red tape” and said the president could authorize chloroquine’s use for the coronavirus immediately. Carlson, who looked somewhat uncomfortable with Rigano’s robotic cadence, couched his praise but didn’t question Rigano on his explosive claims.

“It’s our job to be skeptical of all and any claims. However, I very much want to believe this and I think we need obviously immediately to run it down. The federal government needs to find out if this is true, because if it is, that’s the biggest news of this moment,” Carlson said.

“I’m so grateful that you announced that on this show, and I hope we’re hearing more about it very soon,” Carlson continued. “Thank you so much for coming on.” 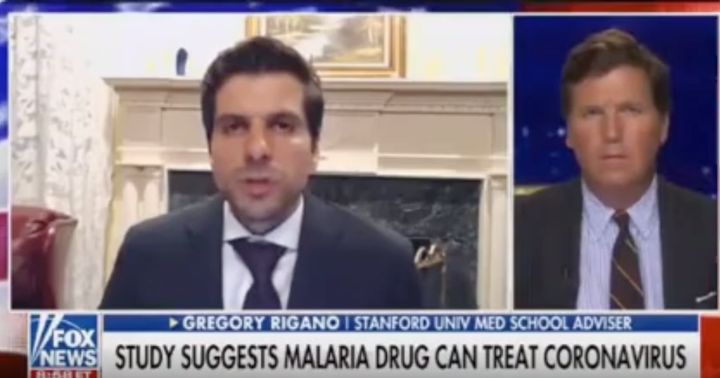 Carlson has played a unique role in the coronavirus crisis, and was one of the only Fox News hosts not to downplay the severity of the disease. He instead embraced a nativist, anti-China message that has become the narrative of the White House and other right-wing media pundits forced to acknowledge the global pandemic. Carlson effectively has a direct audience with Trump through his program, and according to Vanity Fair even privately talked with Trump at his Mar-a-Lago resort in recent weeks to emphasize the seriousness of the outbreak. Carlson’s March 9 on-air monologue about the outbreak was reportedly a turning point for Trump to finally address the crisis.

A day after Rigano appeared on Carlson’s show, Trump repeatedly touted chloroquine as a potential wonder treatment for coronavirus. Trump falsely suggested that the Food and Drug Administration had approved it to treat the virus, and FDA Commissioner Stephen Hahn said the president had directed him to take a closer look at its uses.

Tesla and SpaceX CEO Elon Musk also picked up on Rigano and Todaro’s paper, on Tuesday tweeting it out to his over 32 million followers and then engaging in a back-and-forth with Rigano. Major venture capitalists including Bill Gurley and David Sacks also shared the document, with Sacks tweeting “if true, all other conversations are moot. Flattening curve irrelevant.” Musk’s apparent endorsement drew the attention of Beck, who interviewed Rigano on his popular right-wing radio show Thursday.

“One of the things that caught my eye is that Elon Musk is all over this, and it’s gonna be guys like that that really change things,” Beck said on the show.

Rigano told Beck that he and Todaro were in “active discussions with Elon Musk on Twitter.” He also claimed to have a “direct line” to the White House and said “we know that President Trump received our white paper within 24 hours after it being published.” Rigano asked for the government’s support “both financially and scientifically.” The White House did not respond to a request for comment on Rigano’s claims.

Mainstream media outlets, many of them tech-related publications that cover Musk’s activities, have also run stories on Rigano and Todaro’s paper ― although some have been more critical and noted that it lacks clinical trials.

At a White House press conference on Friday, the use of chloroquine came up once again when a reporter asked Dr. Anthony Fauci, director of the National Institute of Allergy and Infectious Diseases, whether there was any evidence to suggest it could be used as a prophylaxis against COVID-19.

“The answer is no, and the evidence you’re talking about is anecdotal evidence,” Fauci said.

But Trump was more optimistic, again suggesting chloroquine could have impressive effects.

“I’m probably more of a fan of that than, maybe than anybody, but I’m a big fan,” Trump said of the drug.