Many of the right-wing protests against state stay-at-home orders sweeping the nation have been organized or attended by white nationalists, conspiracy theorists, anti-government militias, members of a neo-fascist street gang, and other assorted extremists and scam artists, a HuffPost analysis shows.

The protests, largely coordinated on Facebook, have seen crowds of hundreds descend upon state and city government buildings, where participants flagrantly flout social distancing guidelines to demand that their respective governors reopen state businesses during a deadly pandemic.

Images of these often heavily armed protesters, screaming at health care workers and blocking ambulances from reaching hospitals, have gone viral, shocking a country where polls show a large majority support measures to slow the spread of COVID-19, which has already killed over 45,000 people in this country. 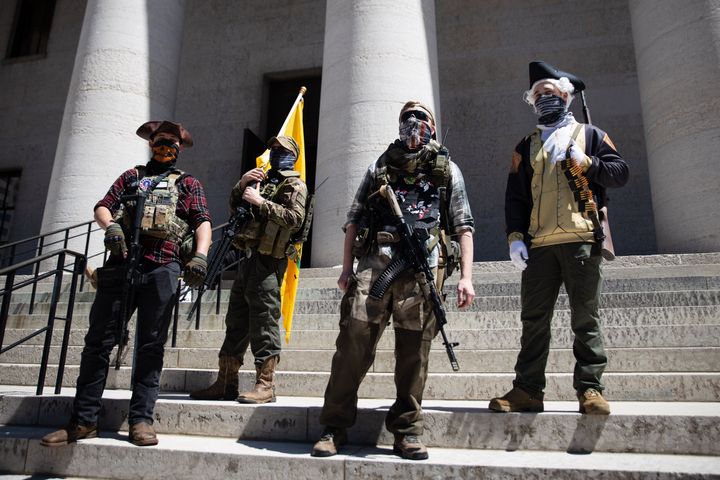 Yet the events — which present a clear danger to communities across the U.S., risking the further spread of a virus — have been promoted extensively by Fox News. On Friday, immediately after a Fox segment sympathetic to the rallies, the president tweeted out his support for the protesters.

“LIBERATE MINNESOTA!” “LIBERATE MICHIGAN!” “LIBERATE VIRGINIA,” Trump wrote in a tweet-storm, directly contradicting the advice of the medical experts on his own COVID-19 task force.

It’s easy to see why footage of the protests might excite the president. They bear a striking resemblance, after all, to his own fascist campaign rallies, with attendees who are almost uniformly white, and who display a deep devotion to the president, donning red MAGA hats and waving Trump 2020 flags.

And like Trump’s rallies, the anti-shutdown protests are teeming with right-wing extremists.

Here’s a brief look at some of the figures who have either organized or attended these events over the last week.

A rally Monday in Augusta, the state capital of Maine, was organized in part by Larry Lockman, a white nationalist former state lawmaker who in 2017 warned that proposed immigrant welcome centers were tantamount to a “war on whites.”

According to Maine-based journalist Nathan Bernard, Lockman helped coordinate Monday’s anti-shutdown event on the “Mainers Against Excessive Quarantine” Facebook page, where he encouraged attendees to show up to the rally wearing MAGA gear. “This is about the loss of our civil rights and its impact on our businesses and religion,” he wrote in one post.

In Columbus, Ohio, two men were photographed at an anti-shutdown protest holding up an anti-Semitic sign depicting Jews as rats, calling them “the real plague.” The Anti-Defamation League’s Center on Extremism believes one of the men belongs to the neo-Nazi National Socialist Movement.

According to the ADL, this individual was photographed at a 2019 white power rally with Timothy Wilson, who was killed by federal agents last month during an attempted arrest over his alleged plot to bomb a Missouri hospital during the pandemic in order to attract attention to his white supremacist views.

A “Reopen Florida” protest scheduled for this weekend in Miami was organized by a leader of the neo-fascist street gang The Proud Boys, the Miami New Times reported this week.

Enrique Tarrio, a longtime Proud Boy, admitted to the New Times that he’d organized the rally, which he’s advertised as being “against the Democrat-driven unconstitutional lockdown.”

Members of the Proud Boys — a Southern Poverty Law Center-designated hate group originally founded by bigot Gavin McInnes — have deep ties to a host of white nationalist and militia groups, and are best known for violently attacking their political opponents.

Proud Boys have also been spotted at anti-shutdown protests in Colorado, Nevada, Ohio and Michigan. At the rally in Lansing, Michigan, Proud Boys were allegedly among the attendees blocking ambulances from being able to reach a hospital.

Also in Michigan — as noted by reporter Jason Wilson in The Guardian — were members of the Michigan Liberty Militia, whose Facebook page Wilson notes “features pictures of firearms, warnings of civil war, celebrations of Norse paganism and memes ultimately sourced from white nationalist groups like Patriot Front.”

An April 19 rally in Olympia, Washington, was well-attended by other anti-government militia groups, including the Oathkeepers and Three Percenters, whose members have been implicated in multiple anti-Muslim terror plots in recent years.

Matt Marshall, leader of a state chapter of the Three Percenters, encouraged attendees ahead of the Olympia rally to wear Hawaiian shirts, a reference to the “Big Luau,” which is itself code for the “boogaloo,” a term used in white supremacist, militia and far-right circles to describe the bloody civil war they predict — and often hope — is coming to America.

According to the ADL, anti-shutdown protesters in Tennessee and New Hampshire have been spotted holding up signs invoking the boogaloo. “Liberty or Boogaloo,” the signs have said, and “Join my boog squad.”

In San Diego, an anti-shutdown protest this past Saturday was organized by Roger Ogden, who has previously held a series of far-right rallies in the city in coordination with the Proud Boys and the Three Percenters.

“We do not believe that the COVID-19 bug represents such an immediate danger to others that constitutional rights should be curtailed,” Ogden told reporters at the San Diego rally, downplaying the virus as less severe than the flu. (COVID-19 is thought to be 10 times more deadly than the flu.)

And in Idaho, rally scheduled for this Friday outside the state capital building in Boise is being advertised by Diego Rodriguez, a pastor and former Republican candidate for the state senate.

Rodriguez recently held an Easter Sunday church service — in defiance of social distancing orders in the state — with Ammon Bundy, who led the militia occupation of the Malheur National Wildlife Refuge in 2016.

Anti-vaccination extremists, a mainstay of Trump rallies and other far-right events in recent years, have been seen at multiple anti-shutdown protests.

An April 14 rally in Raleigh, North Carolina, was organized in part by an anti-vaccination activist named Ashley Smith.

“I am against mandatory vaccination,” Smith said in an email to The News & Observer. “That is a personal right and as a sovereign citizen I have the right to choose what medical procedures I and my children receive. Pandemic status/state of emergency doesn’t change that.”

Public health experts fear the anti-vaxx movement could, once a COVID-19 vaccine is developed, undermine a national inoculation program. 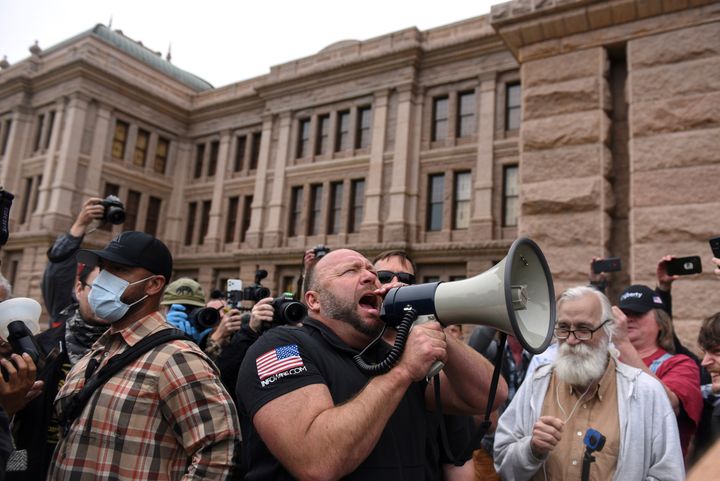 When Infowars founder Alex Jones arrived with a bullhorn, fans swarmed around him and jostled to shake his hand as Jones declared that the pandemic — which has already killed over 500 people in Texas — is a hoax.

Investigations by The Washington Post and NBC News revealed that some of the largest Facebook groups organizing protests across the country were all founded by four brothers with a history exploiting far-right causes to rake in hundreds of thousands of dollars.

According to NBC News, the groups started or administered by the brothers, which have amassed some 200,000 members, direct people to websites owned by the Dorrs, which then directs people to register their names and addresses, or to sign up as dues-paying members for organizations promoting pro-gun, anti-abortion, or pro-Trump causes.

But Republicans who have previously crossed paths with the Dorr brothers warn that such fundraisers have little to do with political organizing and more to do with lining the Dorrs’ pockets.

And Minnesota Citizens Concerned For Life, a prominent anti-abortion group, states on its website that the “Dorr brothers are established scam artists.”

“Nothing they say can be believed,” the website says, “and giving them your money will not advance the pro-life cause in any way.”