House Democrats walked out of the Capitol to prevent voting on Senate Bill 7 – a bill that would limit certain ways of voting. In retaliation Gov. Greg Abbott threatened to veto funding for lawmakers’ salaries in the state budget.

The Texas showdown comes as Republican state lawmakers across the nation enact voter legislation they say will crack down on election fraud.

Here’s what we know about the ongoing feud in Texas and beyond. 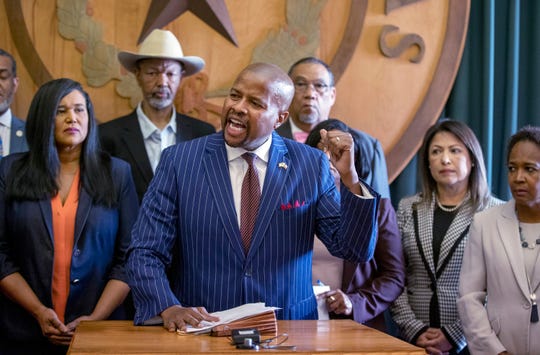 What happened over the weekend?

House Democrats united to break quorum and vacated the House chamber, blocking Republicans from passing SB 7 before the midnight Sunday deadline to approve the legislation, according to the Austin American-Statesman.

“Breaking quorum is a procedural tool we don’t use often in the House,” Texas state Rep. Eddie Rodriguez, a Democrat, said via Twitter. “We had to act last night because #SB7 was a threat to our democracy – including procedurally, as each time it was passed was under the cover of night or w/o the input of those we are elected to serve.”

The state House Democrats tried to prevent the bill from passing by delaying a vote until after the deadline passed. When that tactic wouldn’t work they decided to walk off the floor.

In response, Abbott announced the bill will be added to a special session agenda. “Election Integrity & Bail Reform were emergency items for this legislative session. They STILL must pass,” he wrote. “Legislators will be expected to have worked out the details when they arrive at the Capitol for the special session.”

He also wrote in another tweet that he would veto Article 10 of the budget passed by the legislature, which funds the state budget for lawmaker salaries. “Article 10 funds the legislative branch. No pay for those who abandon their responsibilities. Stay tuned,” Abbott wrote in a tweet.

Democratic state Rep. Donna Howard called Abbott’s threat “a rather ridiculous statement to have made.”

June 20 is the deadline for Abbott to carry out the veto.

What’s in the bill?

It also makes it a crime to aggregate ballots for a candidate, also known as vote harvesting, in addition to creating “at least 10 categories of new or enhanced criminal penalties related to elections,” the Austin American-Statesman reports.

The legislation protects partisan poll watchers by criminalizing elections officials who reject a designated watcher. And it blocks Sunday voting before 1 p.m. which Democrats say will stifle “Souls to the Polls” popular in Black churches to drive voters to the polls during morning services.

“I represent a majority African American district, and we benefited from the drive-thru voting that you’re trying to ban now. I feel like you’re coming for my district,” said state Sen. Borris Miles of Houston.

During debate Sunday night, Democrats singled out new language not previously included in the bill that would allow a court to void an election if there were enough fraudulent votes to change the outcome of the election.  “The implications of this are unthinkable,” said state Rep. Julie Johnson, D-Farmers Branch.

Officials from the FBI, Department of Justice and Texas secretary of state’s office have previously acknowledged that the 2020 presidential election was free of widespread fraud.

President Joe Biden said in a statement to The Texas Tribune that SB 7 is “part of an assault on democracy that we’ve seen far too often this year — and often disproportionately targeting Black and Brown Americans.”

Texas Democrats who walked out of House chamber have called for Congress to pass national legislation that would protect the right to vote. “We did our part to stop SB 7. Now we need Congress to do their part by passing HR 1 and the John Lewis Voting Rights Act,” tweeted state Rep. Erin Zwiener, D-Driftwood.

The For the People Act, also known as H.R. 1, and the John R. Lewis Voting Rights Advancement Act, two pieces of legislation championed by Democrats, aim to limit voting restrictions— especially for people of color.

Democrats control both the Senate and the House, but for either legislation to pass it will need at least 10 Republican votes to overcome a legislative hurdle in the Senate called a filibuster. Biden also voiced his support for the two bills during his first address to a joint session of Congress.

The For the People Act passed the House in March. It has no Republican backers. The John Lewis Voting Rights Advancement Act has yet to be taken up in the House.