Despite never having made a profit, the billionaire Elon Musk’s electric car manufacturer has been tipped by some pundits to achieve a valuation of more than $1tn (£800bn) as demand for electric vehicles soars.

Shares in Tesla climbed by more than 4% during Wednesday to more than $1,100 apiece, giving the company a valuation of $209bn, ahead of Toyota on $205bn. The increase means Tesla has now outstripped Toyota on the stock market, even factoring in differences in the way that companies are valued in the US and Japan.

Tesla’s performance is all the more remarkable given that it has never made a profit, but analysts have pointed to the company’s prospects as a market leader in battery-powered vehicle technology.

Analysts at the stockbroker Jefferies said the coronavirus pandemic could accelerate the speed at which the world adopts cleaner fuels.

“We see Covid-19 as an accelerator of the transition to EVs [electric vehicles] and renewables, from consumers and public policy,” they said.

“Tesla remains significantly ahead of peers in product range, capacity and technology.”

Excitement has also been building around a so-called “million mile” battery lasting up to 16 years, which Tesla’s Chinese supplier Catl has been working on and which is predicted to lower the cost of electric vehicles.

The rise in Tesla’s share price is doubly good news for Musk, who enjoys a controversial pay arrangement linked to the company’s stock market performance that could theoretically hand him a $55bn bonus.

Under the scheme corporate governance experts have described as “staggering”, Musk must build Tesla into a $650bn company over the next 10 years, meaning the company’s share price will have to more than treble from Wednesday’s price of $209bn.

Pirc, an influential adviser to shareholders, including the UK’s local authority pension funds, said this week that investors should vote against Tesla’s executive pay deal because it “unfairly enriches the chief executive”.

Ahead of Wednesday’s symbolic moment, Tesla appeared to have eclipsed Toyota earlier this month, according to the way that Wall Street values listed businesses.

Posts on Twitter in mid-June praised the company for reaching a stock market valuation of $184bn on the Nasdaq exchange, ahead of Toyota on $179bn, drawing approval from Musk via his own account on the social media platform. 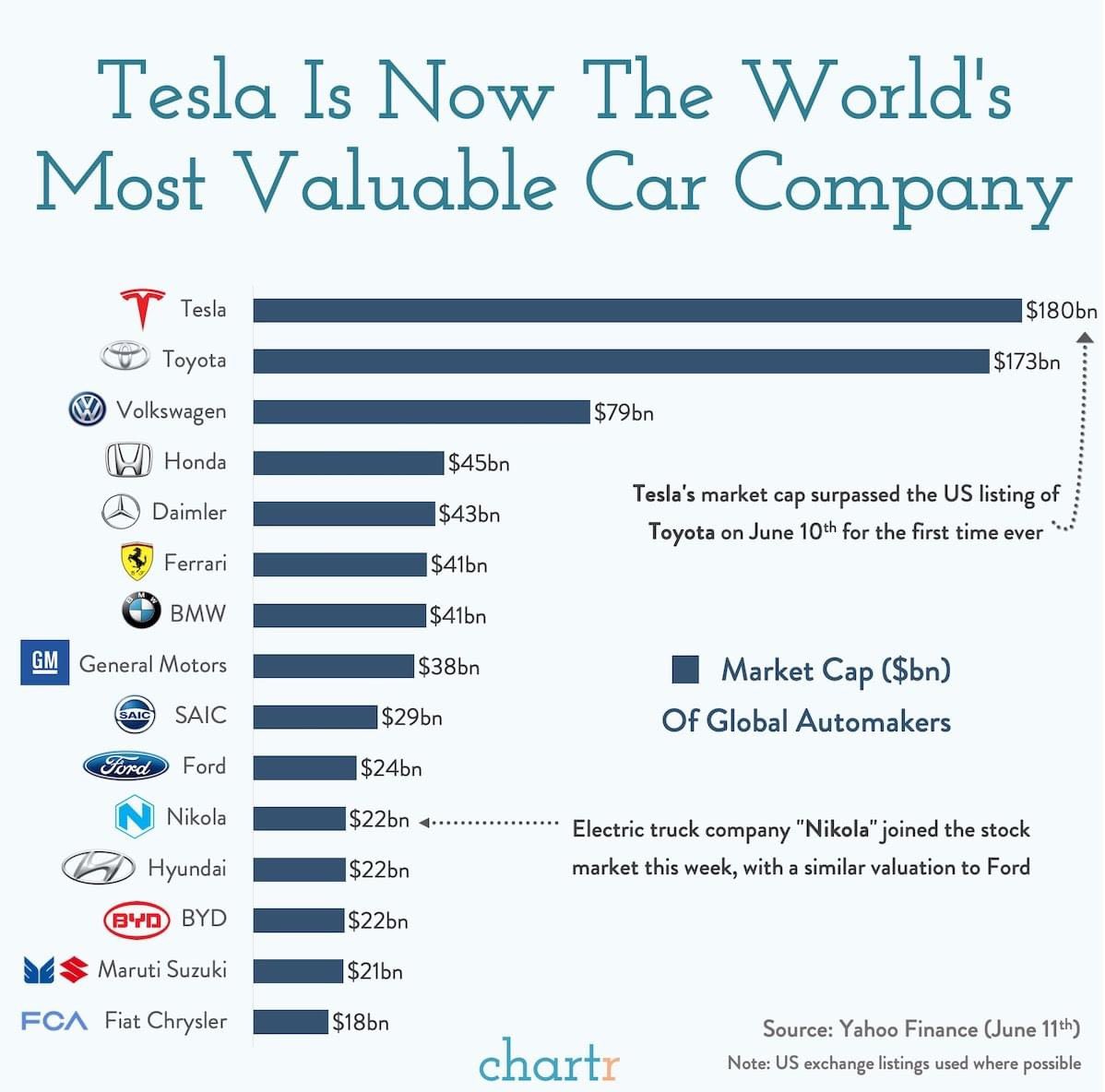 But the Tokyo stock exchange measures stock market valuation differently, counting shares that companies hold in themselves and which cannot be purchased by outside investors.

Such shares, which are described as being held “in Treasury”, are the result of firms buying their own stock to boost returns to investors.

The practice is sometimes criticised as an artificial means of propping up a company’s stock market performance.

Including Treasury shares, Toyota remained the world’s most valuable carmaker at $205bn, until Tesla blew past that watermark on Wednesday. Tesla does not hold any shares in Treasury.