NBC’s Chuck Todd failing to ask Dr. Fauci about the origins of COVID and more round out today’s top media headlines.

It was announced on Monday that Teen Vogue had found its new editor-in-chief after the magazine’s first choice became a victim of cancel culture.

Sharma is set to take over as editor-in-chief on May 24.

ALEXI MCCAMMOND OUT AFTER STAFFERS REVOLT AGAINST OLD TWEETS

“Versha is a natural leader with a global perspective and deep understanding of local trends and issues — from politics and activism to culture and fashion — and their importance to our audience,” Condé Nast boss Anna Wintour wrote in a press release. “She is a masterful storyteller who can move from platform to platform with ease, and I am excited by her optimistic and expansive vision for Teen Vogue.”

“I’ve long admired the work that Teen Vogue has done, building and fostering a community of young people who want to change the world,” Sharma said. “I believe that Teen Vogue can continue to be a force for good, with a focus on empathy, accountability, optimism and impact, and it is such an honor to join this team and lead the title into the future.”

Sharma took to Twitter with the announcement, writing, “Thank you to everyone who helped get me here!”

However, there is no one Sharma can thank more than McCammond, who stepped down from the gig even before she formally started after Teen Vogue staffers openly revolted over offensive tweets she had made as a teenager over a decade ago.

“I became a journalist to help lift up the stories and voices of our most vulnerable communities,” McCammond said in a statement back in March. “As a young woman of color, that’s part of the reason I was so excited to lead the Teen Vogue team in its next chapter.

“My past tweets have overshadowed the work I’ve done to highlight the people and issues that I care about — issues that Teen Vogue has worked tirelessly to share with the world — and so Condé Nast and I have decided to part ways.” 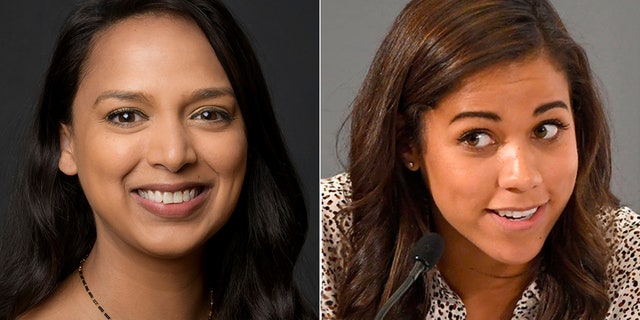 The 27-year-old Black journalist previously addressed the 2011 remarks, which included hoping she didn’t wake up with “Asian” eyes and using the term “homo,” back in 2019.

Despite her previous apology, Teen Vogue staffers still took to social media to express outrage over the incoming editor-in-chief.

However, one of the staffers who expressed solidarity in the anti-McCammond movement was revealed to have a years-old history of making racist tweets as well.

Teen Vogue senior social media manager Christine Davitt sent tweets back in 2009 repeatedly identifying a friend as a “ni–a,” and in 2010 used the word “ni–a” in a joke tweet. The friend appears to be White. Davitt wrote in other tweets that she is of mixed Irish and Filipino descent.