Samsung’s founding family will donate tens of thousands of rare artworks, including Picassos and Dalis, and give hundreds of millions of dollars to medical research to help them pay a massive inheritance tax following last year’s death of chairman Lee Kun-Hee.

The Lee family, including his wife and three children, expects to pay more than 12 trillion won ($13.9 billion) in taxes related to inheritance, Samsung said on Wednesday. This would be the largest-ever amount in South Korea and more than three times the country’s total estate tax revenue for last year. The family plans to divide the payment in six instalments over five years, while making the first payment this month. 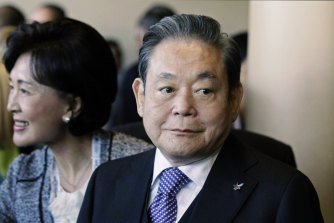 Lee Kun-Hee was known for splurging when he saw an artwork worth buying. Now his family is giving masterpieces away to raise cash for their inheritance tax bill.Credit:AP

Raising cash for the tax payment is crucial for the Lee family to extend its control over Samsung’s business empire, which extends from semiconductors, smartphones and TVs to construction, shipbuilding and insurance. Some analysts say the process could result in a shakeup across the group.

Giving away the late chairman’s vast collection of masterpieces could help smoothen the payment as his family wouldn’t need to pay taxes on donated artworks.

Before his death in October, Lee was credited for transforming Samsung Electronics from a small television maker into a global giant in semiconductors and consumer electronics. But his leadership was also marred by corruption convictions that highlighted the traditionally murky ties between the country’s family-owned conglomerates and politicians. He had been hospitalised for years following a heart attack in 2014.

Lee’s only son and corporate heir, Lee Jae-yong, who has since helmed the group in his capacity as vice chairman of Samsung Electronics, is currently serving a two and a half-year sentence for his involvement in a 2016 corruption scandal that spurred massive protests and ousted South Korea’s then-president.