Racial justice activists rushed to judge the championship basketball team of Coronado, CA as racist, but are they really?

The one thing guaranteed when one uses race as a means to power is absurdity. The actual truth is ignored for the optics that can be spun to serve those pursuing power. And the absurdity arises from the simple fact that many folks see the actual truth plainly but choose to ignore it for the power that the optics promise.

Those were my thoughts as I drove over the bridge from San Diego to the island of Coronado on a sunny and humid August day. The small town, home to the Navy SEALs, had made news this past June during the Division 4-A regional championship when the Coronado High School basketball team was condemned for throwing tortillas at Orange Glen, a mostly Hispanic high school. Like many others, I cringed at the national media reports on this latest proof of all-American racism.

Less than 12 hours after the game, the Coronado Unified School District’s board blasted the “racism, classism, and colorism which fueled the actions of the perpetrators.” The California Interscholastic Federation soon stripped the championship from the high school, imposed sanctions on all of its sports programs (yes, even women’s lacrosse) and made racial sensitivity training one of the conditions for redemption.

It was not until nearly two months later that I learned what had been reported was wildly inaccurate. Programs like the Anti-Defamation League’s (ADL) No Place for Hate had been quick to brand the teenagers on the team as racist but it was a 40-year-old man named Luke Serna that had brought the tortillas. He has been described by the townspeople as a Coronado alum who had not been to a game all year, a latino, a president of a local union and a political activist with ties to the island’s left-wing groups that advocate for critical race theory (CRT). It was this man who told the players, cheerleaders and fans to throw the tortillas in the air in celebration if Coronado won. 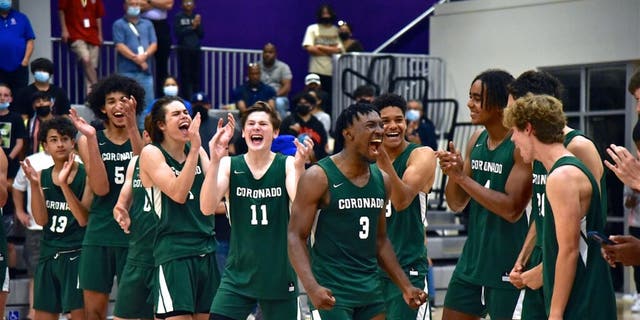 Coronado Islanders Varsity Basketball team celebrates their CIF Championship on the court after buzzer goes off in their 51-48 win over Orange Glen Friday, June 11, 2021 in San Diego. (Photo by Joan C . Fahrenthold).

One thing missing from the media accounts that I read or watched was that everyone in that gymnasium possessed enough common sense to ignore the stranger and his tortillas. That is, everyone but the two excited 14-year-old JV players who threw the tortillas up in the air.

It would seem that the parents would have simply addressed this situation for what it was worth, but the powerful and ever-expanding racial justice industry saw this as a golden opportunity to expand its powers.

When Alex Crawford of Coronado made his buzzer-beating three-pointer at the end of the overtime game (see the amazing shot in the accompanying video), he was lifted onto the shoulders of the delirious crowd. In the middle of this chaos, the Coronado head coach, JD Laaperi, told his Orange Glen counterpart, Chris Featherly, to “get your kids and get the (bleep) out of (the Coronado gym).”

Tensions were already high between the two teams that had played a tense game only days earlier. In that game, the Coronado captain, Wayne McKinney, had a clean breakaway when he was tackled hard to the floor from behind, leaving many to believe the Jordan Rules were in effect.

These were the conditions that led to the melee between the coaching staffs in front of the Coronado bench. And when the tortillas rained down, the optic was created.

Robert and Candie Couts, parents to a Coronado varsity basketball player and a cheerleader, recounted how it took them only two minutes to get home from the game and social media had already reframed the multiracial basketball team into the optic of “white” Coronado throws tortillas at a hispanic high school.

When I met Stacy Keszei, a Coronado school board member, she revealed how the board called an illegal meeting (no public notice, etc.) in the early hours of Father’s Day, less than 12 hours after the basketball game. The board only had a short video of a woman yelling, “Racist! Racist!” But that video was enough to make the board fear the charge of racism heading their way. They abandoned due process and signed the “racism, classism, and colorism” statement — effectively redirecting the charge of racism away from them and onto innocent teenage boys. These boys, who had just won their town a championship, were also called “perpetrators.”

When Keszei later learned that it was Serna behind the tortillas, she had the moral fortitude to demand that her name be removed from the statement. In response, two other board members, Esther Valdes Clayton and Whitney Antrim, doubled down. Antrim said: “This incident was undeniably racially insensitive and that insensitivity is rooted in racism, classism, and colorism — I stand by that statement.”

One of the toughest things about getting caught up in an absurdity like this one is that it leaves those on the side of truth feeling a kind of Kafka-esque powerlessness. Sometimes all these folks can do is to chuckle with exasperation. Meanwhile, the other side has already taken off full speed, exploiting the new found power that the optics provided to leverage change.

Activists from Black Lives Matter, NAACP, LULAC, and many other organizations quickly descended onto the island. Enrique Morones led the way, calling tortillas “bombs of racism.” The use of such hyperbolic language should not come as a surprise. After all, if the optic lacks truth it must often fill the void with pugnacious language to intimidate others into silence.

I then learned that the Coronado community had been involved in its own battle over critical race theory. A week before the basketball game, many parents attended a school board meeting where they voiced objections to the ADL’s “No Place for Hate.”

On the surface, No Place for Hate seems reasonable, teaching kindness in elementary schools. I did wonder how this was different from teachers teaching respect until I read that schools must report any “unkind” acts directly to the ADL, a very questionable policy shift that affects the parent-school dynamic.

In high school, the students are told that kindness not is enough and that they must become “activists.” They must understand their racial identities, challenge systemic racism and “understand how to engage in changing systems and society.”

Several ADL representatives have denied that they are teaching anything akin to CRT. But one of the key tenets of CRT is that everything must be viewed through a racial lens. Isn’t that how the ADL viewed the Coronado basketball team?

The statement that ADL released four days after the basketball game called the actions “racist” and said that Coronado “has an opportunity to send a message to school districts across the country that racism, bullying, and hate will not be tolerated … We cannot let hate go unchecked and we encourage all to speak out forcefully against this abhorrent behavior.”

What “abhorrent behavior” was ADL referring to? Two 14 year old youths throwing tortillas after a championship? The optics looked bad, but the indisputable fact is that there would have been no optics if Serna had not brought the tortillas to the game. (Indeed, many townspeople wondered out loud if Serna had brought the tortillas to the game in hopes of creating a racial incident that would advance the CRT agenda.)

What I found profoundly ironic was that the organization that prides itself on kindness showed no mercy to the basketball team. How can a town trust an organization such as ADL with their children if they are that quick to forgo due process and brand minors as racist, a stigma that follows them everywhere in the age of the internet?

Berie Grobe, a Coronado resident and a retired human resource administrator in various school districts, told me: “Our culture is shifting and, as things like critical race theory take hold, you aren’t an individual anymore but a member of a group. That is why we no longer have due process. If somebody did something wrong that night, then that individual should be held accountable and punished. But that’s not how it is anymore because it is no longer about the individual, but the group and there’s no due process with groups.”

Despite these dire words, Grobe and several of her townspeople, including the Couts, refused to give up their grip on truth. They attended every school board meeting in hopes that their principled presence would cause the prevailing optic to eventually crumble. These folks cited the words of Wayne McKinney, the captain of the basketball team, as an inspiration. At a board meeting, he spoke of how the game had been a highly contentious one, but he was clear: what happened was not “based on race or class. The tortillas were brought by someone not associated with the team. However, the throwing of the tortillas after the game was unsportsmanlike and inexcusable and on behalf of the team, we apologize for that action.”

In that statement, Wayne exhibited more empathy and kindness than most of the adults and organizations involved. He knew that, optics aside, if he had been an Orange Glen player, it would not have felt good to see the tortillas, especially after a heartbreaking loss. Yet, Wayne knew the players on his own team and was not willing to betray their character for an optic.

At the Aug. 19 meeting that lasted nearly eight and half hours, the school board finally voted 3-2 to remove “racism, classism, and colorism” as well as “perpetrators” from its statement. To date, the CIF still has not returned the championship to the high school and it has not lifted the sanctions imposed on all of its athletic teams.

While this victory may seem small it does bring a ray of hope that many Americans are not willing to throw truth and due process out the window in the name of racial justice.

As I drove over the Coronado bridge on my way back to Los Angeles, I thought about the basketball team and what it takes to become a champion. These boys, whose ancestors came from all four corners of the world, had practiced hard every day. They learned how to strengthen their individual talents. They learned how to strengthen one another. They overcame personal differences. At every game, they put their talents and character to the test and became one of the best San Diego teams ever. We can learn far more from these young boys than the organizations that descended onto this town and called these champs racists without the blink of the eye.

Eli Steele is a documentary filmmaker and writer. His latest film is “What Killed Michael Brown?” Twitter: @Hebro_Steele