Mining giant Rio Tinto will pay its ex-chief executive Sam Walsh nearly $7 million in entitlements which were frozen while anti-corruption authorities investigated a payment to a consultant on an iron ore project in Guinea several years ago.

Mr Walsh stepped down from the global miner in 2016 when he was replaced by Jean-Sebastien Jacques, but Mr Walsh and Rio Tinto had agreed to defer his incentive payments while inquires were carried out by regulators in several jurisdictions. The $US10.5 million payment, to French consultant Francois de Combret to secure ownership of the Simandou iron ore deposit, was made in 2011 while Mr Walsh ran the company's iron ore division. 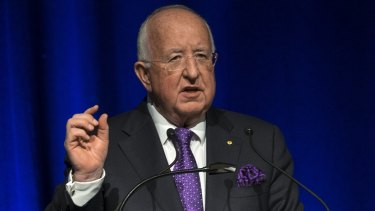 Rio Tinto said it had wanted to suspend the entitlements until the investigations were complete. However, Mr Walsh sent the matter to an independent and binding resolution hearing, which has ruled in his favour. He will receive an immediate payment of $6.8 million.

"Rio Tinto felt that a further deferral of the amounts that were payable on 31 December 2018 was appropriate given that the regulatory investigations in relation to the Simandou matter are ongoing," the company said on Thursday. "However, the parties could not agree to extend the deed of deferral."

Rio Tinto chairman Simon Thompson on Thursday said the company had originally hoped the investigations "would have been concluded by now".

Investigations into the matter that remain ongoing include the UK's Serious Fraud Office and the Australian Federal Police.

"Following the completion of the confidential and binding dispute resolution process, a decision was made that the amounts should be paid."