While markets plunge on the prospect of a coronavirus global pandemic, Rio Tino chief executive Jean-Sebastien Jacques and University of NSW chancellor David Gonski say China is no longer the problem.

"China may well come back quicker than we think and basically the question, of course, for us is what happens in the rest of the world," said Mr Gonski on Monday. 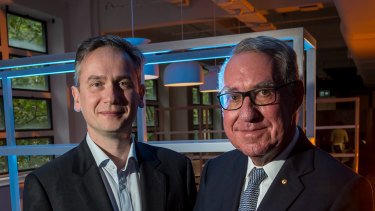 "China seems to be recovering," agreed the Rio Tinto boss who also said "there is no issue today" with Rio selling its product into the country.

"It is fair to say that China is going back to work, slowly but surely, but (it is) early days on this one," he said.

Mr Jacques also cautioned that the "news coming out of Europe or the US in the last 24 hours is very, very concerning and it could have an impact on the global economy.”

The two businessmen were attending a Future Minds Accelerator event at which it was announced that Mr Gonski would chair the advisory council for the program, which will see Rio Tinto invest $10 million to address the looming skills gap in Australia's workforce.

Mr Gonski, who is also chairman of ANZ Group, said the universities were among the first to appreciate the implications of the virus with large numbers of Chinese students now missing half of their first term, which has had major implications for their education as well as the university's revenue.

Mr Gonski said the university is planning on having the full number of students back when the second term starts on June 1.

"If that does not occur, obviously the losses will be bigger but we have many levers that we can pull," he said.

Last week, Sydney University announced that it would reduce spending, as it prepares to takes a $200 million hit to its $2.8 billion budget if some 15,000 Chinese students are unable to reach campus for semester one.

Speaking of the advisory council he is chairing, Mr Gonski said it is designed to help accelerate how young students prepare for a digital future. The program will have a strong focus on giving educational startups money and mentoring to help develop their services.

The initial phase of Future Minds Accelerator program will see the advisory council identify startups with existing projects that can be scaled up quickly to enhance skills.

“What’s being suggested here is not to replace government funding," said Mr Gonski.

Mr Jacques and Mr Gonski emphasised that it is not just technical skills that need enhancing. Critical thinking and problem-solving skills will be just as important given that most of the jobs available when the current crop of primary schoolers enter the workforce do not exist today.

"The focus is going to have to be more on skills, and acknowledging that education will be a continuous process rather than the batch process it is today," said Mr Jacques.

"The ability to have those critical skills, thinking out of the box in a fast moving fast evolving world is going to become more and more important,” he said.