Right-wing media outlets and pundits spent weeks dangerously minimizing the severity of the coronavirus and claiming that accurate reports on the outbreak were part of a liberal conspiracy to defame President Donald Trump.

But now that the reality of the virus as a public health crisis and economic disaster is becoming unavoidable, some partisan media outlets have refocused on a different message: Trump is doing a great job of handling a serious outbreak. He’s always been doing a great job.

The pivot began after Trump gave his first national address about the coronavirus on Wednesday night and declared a travel ban on a number of European countries. Although Trump’s confusing statements did not address key issues like the dearth of tests for the virus in the U.S., the speech contained the most direct remarks he has made so far acknowledging the severity of the outbreak.

But the damage may have already been done. Right-wing outlets and personalities diminishing the coronavirus could lead to more illness and more deaths if the public ignores warnings from health officials or credible news reports. Given that Fox’s viewers tend to be older, they are also especially vulnerable for coming down with COVID-19, the disease caused by the virus. These attempts by the partisan media to downplay the crisis could quite seriously put lives at risk.

Now these outlets and media figures are facing a challenge: how to maintain an information bubble that calls any criticism of Trump a liberal hoax, while there are clear and tangible effects of the coronavirus on everyday lives. It was one thing to argue Trump did nothing wrong when he solicited foreign aid in an election, but as markets plummet, major events are canceled, schools are closed, and workers are sent home, it’s nearly impossible to ignore that something very bad is happening on the president’s watch.

After Trump’s remarks on Wednesday, some of his key supporters in partisan media gave sycophantic praise of the president. Fox News host Sean Hannity claimed that Trump had been on top of the virus “from day one” and “no president has ever done more, acted more quickly to stop the spread of a disease.” Hannity also altered some of his usual dismissive rhetoric about the virus ― he’d previously called coverage of it a “hoax” ― to acknowledge it carries actual dangers.

“Do we need to take it all seriously? I’ve been saying we have to,” Hannity told viewers.

That is not at all what Hannity and other Fox News pundits have been telling audiences since the start of the outbreak. The overwhelming message from the outlet has been that professional journalists are “weaponizing” the coronavirus to attack Trump. Hannity claimed on Monday that “the coverage we are seeing from the media and the mob is beyond despicable and political.” He spread the claim on his radio show as well, even promoting a conspiracy about the “deep state” using the outbreak fears to manipulate markets. (There is no proof for any of Hannity’s claims.)

Other Fox hosts were similarly disdainful of the numerous, accurate reports that highlighted the Trump administration’s failures to respond to coronavirus and the global implications of the pandemic.

“The hate is boiling over. Many in the liberal media using ― and I mean using! ― coronavirus in an attempt to destroy the president,” Fox News host Trish Regan said in a conspiracy-laden diatribe earlier this week.

Elsewhere in the right-wing media ecosystem, radio host Rush Limbaugh falsely stated that “the coronavirus is the common cold.” (Health officials believe it is actually around 10 times deadlier than the flu.) At the extreme edge of right-wing media, hosts on conspiracy site InfoWars are peddling fake coronavirus cures to profit off disaster.

This misinformation has the potential for real harm. There is evidence that Trump’s rhetoric and right-wing media messaging has divided public perceptions of the virus ― a poll conducted in early March found that Democrats are about twice as likely to believe coronavirus posed an imminent threat to the United States than Republicans were. 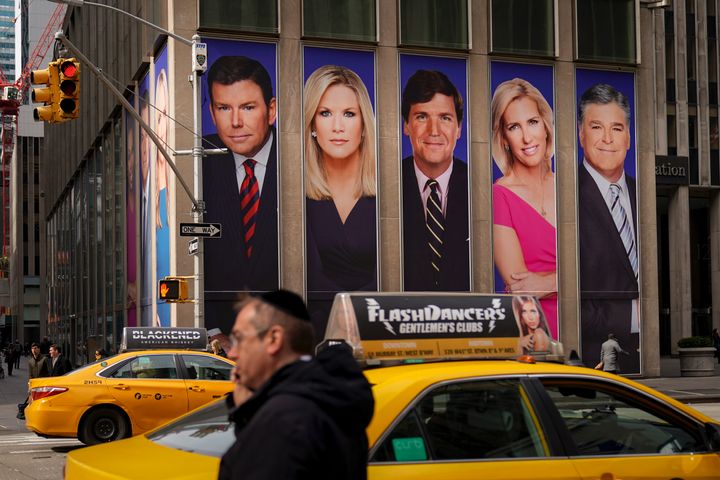 Trump-aligned media have struggled to find a coherent narrative to explain away the visible havoc caused by the virus. Although many pundits, including Hannity, haven’t entirely given up the dangerous message that the virus is overblown, some have also shifted the narrative toward common right-wing targets.

Fox and Friends gave airtime to Trump ally Jerry Falwell Jr., who floated a groundless conspiracy that the virus could be a North Korean and Chinese bioweapon. Fox News host Tucker Carlson has meanwhile fallen back on xenophobia and criticism of “wokeness,” blaming China for the disease and repeating the common white nationalist slogan “diversity is not our strength.” National Review editor Rich Lowry also blamed China and called coronavirus “the first pandemic of the woke era.” Trump has recently hinted at blaming China for the outbreak after initially praising its efforts, and on Wednesday referred to coronavirus as a “foreign virus” while touting his travel ban against China.

Other far-right leaders around the world and their supporters in the media have similarly attempted to refocus the coronavirus outbreak on familiar enemies and downplay government responsibility in preventing COVID-19 cases from spreading. In Hungary, Prime Minister Viktor Orbán warned the public in February that the greater threat to worry about was migration. After Orbán’s government declared a state of emergency this week, he claimed there was a clear link between illegal immigration and the outbreak. The leader of Italy’s far-right Lega party, Matteo Salvini, groundlessly blamed the spread of the virus on migrants from Africa.

As Brazil’s coronavirus outbreak worsened in recent days, far-right President Jair Bolsonaro claimed the disease was “not all the mainstream media makes it out to be” and echoed Trump’s talking point that the flu is also deadly. One of Bolsonaro’s top officials tested positive on Thursday for COVID-19 following a trip to Trump’s Mar-A-Lago resort, and the Brazilian president also had to be tested. (Bolsanaro said on Friday that his test for the coronavirus came back negative; he and his son have lashed out about a media report claiming he tested positive.)

On Friday morning, Trump tweeted another talking point that’s been rampant on Fox News recently and criticizes one of the president’s favorite targets: The real reason that coronavirus testing was delayed, he claimed, was Barack Obama.