Abu Dhabi's Etihad Airways is asking cabin crew to take paid leave next month due to the rapidly spreading coronavirus that has led to a drop in travel demand, it said on Wednesday.

"Global restrictions on travel and re-timing of events have caused many passengers to change their travel arrangements, and the airline is among many realigning resources to accommodate these changes," a spokeswoman said. 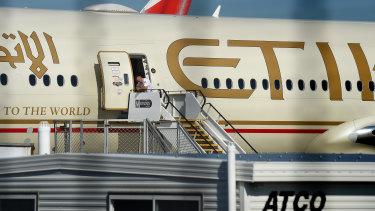 Etihad is asking staff to take leave as travel demand wanes due to the coronavirus outbreak.Credit:Kate Geraghty

An internal email, which does not mention the virus, encouraged cabin crew to bring forward any leave plans from later this year to between April 6 and May 5.

It said those who submitted longer leave duration requests would be favoured and that cabin crew could take leave in blocks of six, 12, or 18 days.

"This is a great opportunity to take some time out or rest, relax and celebrate with family and friends", the staff email said.

Global airlines have asked staff to consider taking paid and unpaid leave, including major international carrier Emirates, as falling travel demand and restrictions associated with the virus have led to flight cancellations.

Germany's Lufthansa said on Wednesday it will ground 150 aircraft out of its total fleet of around 770 due to the coronavirus. "We are dynamically adjusting our plans to reflect extraordinary circumstances," a Lufthansa spokesman said.

Etihad said it was not asking staff to take unpaid leave.

Etihad, owned by the government of Abu Dhabi, has cut jobs, routes and billions of dollars in aircraft orders in recent years as it significantly downsized its operations.

The airline now focuses on point-to-point traffic, though once had ambitions to compete head-to-head with major Gulf hub carriers Emirates and Qatar Airways.