Air New Zealand has gone into trading halt as the kiwi carrier looks to slash capacity after the New Zealand and Australian governments brought in strict new requirements for international arrivals.

Australia’s two local carriers – Qantas and Virgin – are readying for another tough day on markets. Virgin's shares fell heavily in early trade, diving 11.4 per cent to 7 cents a share. Qantas shares dived 8.5 per cent to $2.91 to its lowest level since November 2016.

Sources said on Sunday evening neither local airline was considering a trading halt despite both expecting to further cut capacity. 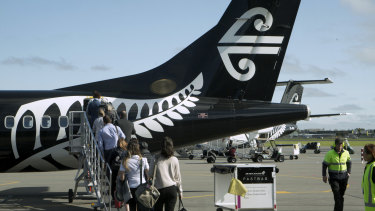 Air New Zealand will be reducing international capacity by 85 per cent.Credit:AP

Qantas announced on Monday that it would soon announce more capacity cuts.

"We've moved immediately to offer a booking waiver to our customers and we're working through the implications for our schedule now given the expected impact on demand, with a view to announcing more detail as soon as possible," a Qantas spokesman said.

Air NZ said on Monday that it had asked for a trading halt so that it could have more time to assess the operational impact of the global travel restrictions.

"On its long-haul network Air New Zealand will be reducing capacity by 85 per cent over the coming months and will operate a minimal schedule to allow Kiwis to return home and keep trade corridors with Asia and North America open."

"Further details of this schedule will be advised in the coming days."

Flights between Australia and New Zealand will also be significantly reduced.