In China, the coronavirus rocketed through five prisons in three provinces, causing over 500 cases. In Iran, 54,000 inmates were temporarily released as the outbreak in that country spurred concerns the illness would rapidly spread in detention facilities. And this week in Italy, prisoners at 27 facilities rioted in response to quarantine attempts by prison officials desperate to contain the spread of a disease that has infected over 9,000 people there.

As the novel coronavirus has spread across the globe, prisons and jails have consistently been huge problem spots in places where the outbreaks are intense. As with any “congregate setting” ― environments where groups of people are gathered in close proximity to one another, like college dorms and nursing homes ― infectious diseases thrive in correctional facilities. But the difference in jails and prisons is that residents can neither fully self-quarantine nor leave and be fully quarantined elsewhere.

The U.S. has seen an uptick in COVID-19 cases in recent days, with public health officials deeply concerned about a nationwide spread. The U.S. also has a lot of prisoners ― per capita, more than any other country in the world. The 2.3 million incarcerated people in the U.S. are scattered across 1,719 state prisons, 109 federal prisons, 1,772 juvenile correctional facilities, 3,163 local jails and 80 Indian Country jails ― on top of military prisons, immigration detention facilities, state psychiatric hospitals, and prisons in U.S. territories, according to the Prison Policy Initiative. And up to half of them qualify as over-crowded.

The warning lights are already starting to flash. The chief judge for the federal Southern District of New York last week required any inmate coming from the Metropolitan Correctional Center to have a temperature check before being transported to court. Some federal courts in Washington state have postponed jury and grand jury trials.

“When it pops, and it’s about to, it’s going to be really ugly,” said Dr. Josiah Rich, a professor of medicine and epidemiology at Brown University in Rhode Island.

And it’s not just the incarcerated who are at risk. Guards, doctors and other prison staff return to their communities after their shifts. Inmates, particularly at jails, rotate in and out of the community.

The bottom line: Jails and prisons could become hotbeds for infection if public health officials and correctional facility administrators don’t act quickly to put measures in place to diminish that prospect.

Inmates Struggle To Prepare For The Worst

All Rachel could think about as she sat inside the cramped, dirty waiting room at the Metropolitan Detention Center in Brooklyn was washing her hands.

She had to touch a lot of objects at the heavily trafficked facility ― paperwork, lockers, keys, doorknobs ― before she could visit her husband inside the federal detention center. (She asked to use a pseudonym to protect her husband’s privacy.)

Rachel is pregnant and was on high alert for cleanliness because of coronavirus, which has forced millions of people into lockdown in Italy, where some of her relatives live. Plus, Rachel feared transmitting the virus to inmates in a detention center notorious for its abysmal conditions and operational issues.

Once through processing, Rachel ran straight to the bathroom, but the soap dispenser inside was empty. When she asked a nearby corrections officer for soap, they told her none was available, despite the growing global panic over the deadly virus and federal health officials urging people to wash their hands frequently.

In fact, hand sanitizer is not allowed inside most jail and prison facilities because it contains alcohol ― even if it’s prisoners themselves making it for just 65 cents an hour.

“It was just not correct for the time we’re living in with this coronavirus scare,” Rachel told HuffPost. “You do not want to be the person responsible for bringing in such a virus.”

A Federal Bureau of Prisons official told HuffPost no known cases of the virus have been reported among its inmates as of now, and the agency maintains that it’s taken all necessary precautions in the event of any kind of outbreak.

Bureau officials said they are providing guidance to health care professionals and have a screening tool in place for use in the event an inmate or staff member is exposed or symptomatic. And there’s an online reporting system.

Health experts warn, however, that these steps may not be enough.

“Everyone walks to the cafeteria together, walks back through the same hallway, touches the same doorknobs, uses the same showers,” Rich said. “It was pretty clear, as this thing started evolving, that there is person-to-person transmission. It’s also pretty clear that it can spread easily.”

Rich has worked for decades in the Rhode Island correctional system, researching infectious disease and providing medical care for HIV positive inmates and inmates with addiction issues at a maximum security facility.

Many of those incarcerated are older and/or unhealthy, making them more vulnerable to COVID-19 if they become infected. The majority of incarcerated people in the U.S. are between the ages of 31-59, but the number of inmates over the age of 55 increased by a whopping 400% between 1993-2013.

It can be difficult for correctional facilities to divide inmates for health reasons ― such as quarantines or separating out more vulnerable populations ― rather than the typical system of dividing them based on security classifications, as Dr. Homer Venters, president of Community Oriented Correctional Health Services, explained in The Hill last week. This was “extremely challenging” during the outbreak of H1N1, commonly known as swine flu, he wrote. Swine flu affected prisoners all over the country, including more than 700 prisoners in California alone.

At MDC Brooklyn, inmates and their attorneys have been kept in the dark about plans to combat the coronavirus spread. Rachel said she’s been updating her husband as the situation unfolds, telling him to wash his hands constantly, especially before and after computer use. On Monday morning, Rachel said, her husband was handed a can of disinfectant powder without any explanation.

“They haven’t done anything,” she said. “It’s me telling my husband what to do.”

Rachel said she believes MDC is cleaner than the Metropolitan Correctional Center in Manhattan, located just five miles north of the Brooklyn facility. Her husband, who was transferred out of MCC about a month ago, said the building is crawling with rodents and pests.

“We understand the potential disaster of this virus,” Rachel said. “If it’s a problem at MDC, I can only imagine what the situation in the Manhattan facility will be like. … My husband woke up with roaches on his face there.”

Inmates at MCC have described horrendous conditions as concerns about COVID-19 have escalated. Some say they haven’t been allowed to shower or do their laundry in weeks and don’t have access to soap or hand sanitizer.

In a statement Sunday, the Federal Defenders of New York wrote that the group was “extremely concerned about the lack of information and planning” at the MCC and MDC.

“You take a baseline of poor conditions and then you add to it,” said David Patton, executive director and attorney-in-chief for the group, a nonprofit focused on defending impoverished people accused of federal crimes. “It’s all just a recipe for disaster, so when we get no information from [officials] about what their plan is, [it] makes us nervous.”

Detention centers like MDC and MCC, which largely house alleged criminals awaiting trials, are at greater risk during a potential pandemic like coronavirus given the amount of traffic and frequency of people going in and out of the facility, Patton said. 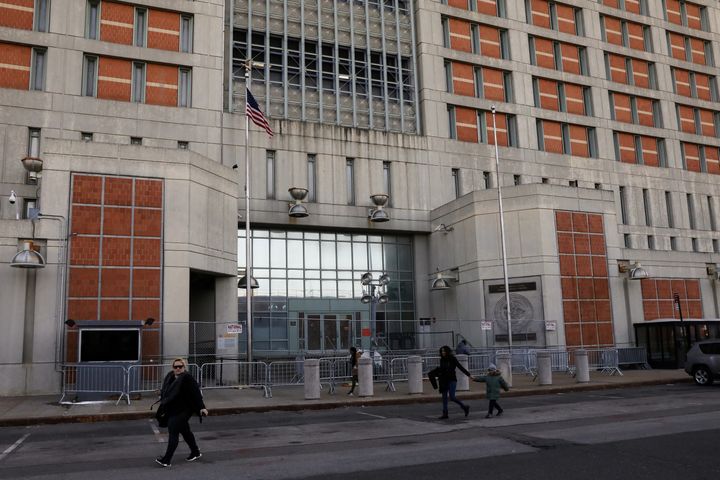 “On top of that, you have all sorts of people who are medically compromised,” he said. “There are a number of people with hepatitis, people with a broad spectrum of medical issues that are not dealt with well even in the best of times. And you have older inmates, you have people who are in high-risk categories and who are kept in thoroughly unsanitary conditions.”

Rachel worries a coronavirus outbreak in these facilities could result in federal officials restricting visits by family members and legal counsel for inmates.

“The entire population of federal inmates in New York City needs to be treated with respect when it comes to this virus,” she said.

The most surefire way to avoid a COVID-19 breakout in a correctional facility is to temporarily release incarcerated people like occurred in Iran, Rich said.

“If we had some rational discussion on the issue, we would conclude what they concluded in Iran ― which is that there are a lot of people behind bars that don’t need to be,” he said.

But that’s not something likely to happen in the U.S., and advocates say measures should be taken in correctional facilities that could halt the spread of infectious disease.

Steps called for by the Federal Defenders of New York include comprehensive testing protocols, greater precautionary measures such as “frequent cleaning and ready availability of soap and tissues,” and ensuring that anyone who tests positive for the virus be quarantined not at prisons but at hospitals.

The group also urges that arrestees be detained only under “extraordinary circumstances” to avoid any new cases from entering prisons or jails.

In a statement to HuffPost, the Bureau of Prisons denied a shortage of cleaning products, including hand soap, for inmates and staff at MDC and MCC. The bureau said it encourages inmates to wash their hands frequently and plans to discuss the concerns raised by the Federal Defenders of New York.

“At this point in time, visitation has not been limited or suspended in any BOP facility due to COVID-19,” the statement added.

Some legal proceedings have already been affected, with federal courthouses delaying trials.

A key condition to help prevent or limit a coronavirus breakout in prisons is ensuring mutual respect between incarcerated people and those providing preventative care.

“Correctional settings around the nation are often run with tolerance for abuse and neglect of incarcerated people,” Venters wrote in his op-ed. “The only path to effective management of COVID-19 in these settings is meaningful partnership that starts now, when plans are being designed, not two months from now when cases are being detected.”