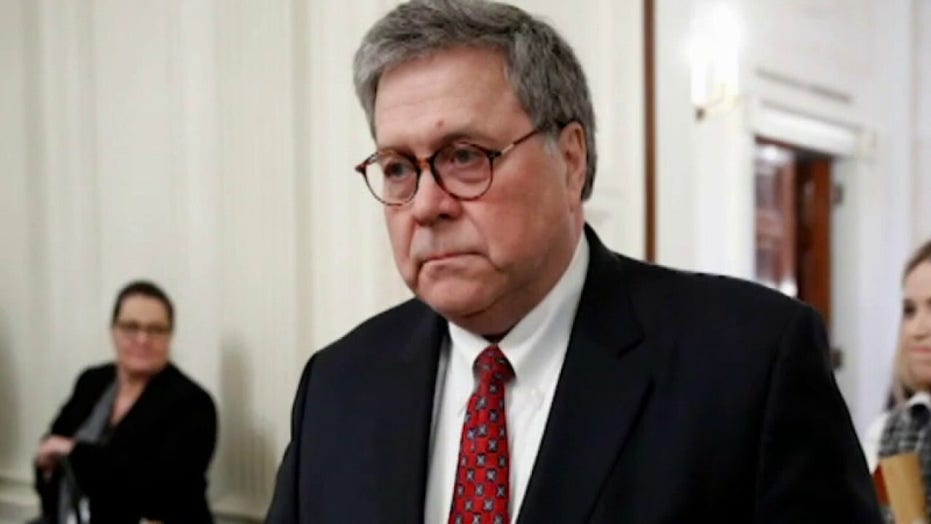 Secretary of State Mike Pompeo praised Attorney General William Barr and lauded his loyalty to President Trump just a day after Barr resigned from his post.

"AG Barr first served our Administration as a member of my Advisory Board at the CIA. He made me a better Director and the Agency a stronger espionage force," Pompeo tweeted on Tuesday.

"I fully supported Bill to become AG as I knew he would serve with professionalism and elan, he did that and more."

Pompeo went on to tout Barr's appointment of Special Counsel John Durham to investigate the roots of the Russia probe.

"AG Barr crushed the propaganda generated by Mueller against President Trump and preserved our Republic from the rogue FBI and Special Counsel’s efforts to undermine the 2016 election based on a bogus theory of Russian collusion," Pompeo said.

The Durham probe was intended to examine the origins of the investigation into the Trump-Russia probe by former Special Counsel Robert Mueller that alleged Trump colluded with Russia to interfere in the 2016 election.

DECLASSIFIED TRUMP-RUSSIA PROBE DOCUMENTS TO DATE: WHAT TO KNOW

In October, Barr appointed Durham as special counsel to ensure that his investigation could continue into the next administration. Barr did not make the Durham appointment public until earlier this month.

Barr has been criticized by top Democrats throughout his tenure, claiming he politicized the Justice Department.

Rumors circulated that Barr was planning on resigning before the end of the year– especially amidst criticism from Trump who accused him of not doing his job after the Justice Department said they had found no evidence of widespread voter fraud in the presidential election as Trump continues to allege.

WHO IS JEFFREY ROSEN, WILLIAM BARR'S REPLACEMENT AS ATTORNEY GENERAL?

Even over the weekend, Trump called Barr a "big disappointment," noting that the nation's top lawyer knew about the federal probe into his opponent, Joe Biden's son for "tax affairs" and did not disclose it before Election Day.

Still, a source close to the matter told Fox News that the president did not ask for Barr's resignation.

"President Trump had AG Barr’s support and commitment to defending law and order against rioters," Pompeo said, referring to Barr's support of Trump, who sent federal law enforcement to several states to quell violence in the wake of Black Lives Matter protests. "Protecting our citizens from these looters and anarchists was the right thing to do and AG Barr made it happen."

"It was a joy and an honor to serve alongside you Bill. Well done," Pompeo said.

Trump, in announcing Barr's resignation on Monday, said Jeffrey Rosen will serve as the acting attorney general upon Barr's departure.

Rosen previously served as deputy attorney general, a position to which he was confirmed in May 2019 following the departure of Rod Rosenstein.