Pfizer, maker of a top-selling COVID vaccine, will buy all the shares of Trillium Therapeutics it doesn’t own, gaining the immune cancer drugmaker for an equity value of $US2.26 billion ($3.1 billion).

Pfizer will pay $US18.50 a share for Massachusetts-based Trillium, the companies said on Monday (US time) in a statement. The price represents a 118 per cent premium to the stock’s 60-day weighted average price. Shares of Trillium nearly tripled to as much as $US17.74 in late trade, while Pfizer are 2.8 per cent higher at $US50.09. 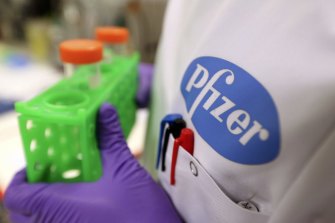 Pfizer’s oncology portfolio includes 24 approved drugs that yielded about $US10.9 billion in revenue last year, up 21 per cent operationally from 2019.Credit:Bloomberg

Pfizer invested $US25 million in Trillium in September as part of its Breakthrough Growth Initiative, when Jeff Settleman, senior vice president of Pfizer’s oncology research and development group, was named to Trillium’s scientific advisory board.

Trillium’s two lead molecules, TTI-622 and TTI-621, block signalling proteins involved in blood cancers, and are both in human trials across several types of disease. They target CD47, a protein found on some cancer cells that cloaks them from the normal immune response, and send a signal activating the response.

Early clinical data for both molecules is encouraging and they’re expected to become another important backbone immunotherapy for multiple types of cancer, especially those of the blood, Chris Boshoff, Pfizer’s chief development officer for oncology, said in the statement.

Blood cancers represent 6 per cent of all tumour diagnoses across the world, according to the statement. Last year, more than 1 million people worldwide were diagnosed with a form of blood cancer and more than 700,000 people died from the disease.

The move follows Pfizer’s July deal with Arvinas to develop and commercialise ARV-471, a drug for breast cancer that degrades the hormone estrogen. Pfizer agreed to pay Arvinas $US650 million upfront as well as $US1.4 billion in potential milestone payments, along with a $US350 million equity investment in the biotech.