EXCLUSIVE: Former Vice President Mike Pence, reflecting on Sept. 11, 2001, told Fox News on Friday that the “failings” of the Biden administration in Afghanistan “cannot diminish the heroism and service” of U.S. military men and women, saying the security of the United States in the last 20 years is a “tribute to the sacrifice” of this “generation of heroes.”

During an exclusive interview with Fox News, the former vice president shared a message to military families who have lost loved ones, as well as active duty and veteran members of the U.S. armed forces.

“We are going to mark tomorrow, 20 years to the day since 9/11, without having had a major terrorist attack on American soil,” Pence said. “That is owing, entirely, to the men and women who stepped forward to defend freedom in Afghanistan and in the War on Terror.”

“And so, the failings of the Biden administration in Afghanistan cannot diminish the heroism and service of all those who brought us to this day,” he said.

Pence shared a deeply personal story with Fox News about Sept. 11, 2001, when he was a freshman member of the U.S. Congress. He was in his office in the Longworth Office Building near the U.S. Capitol when the Pentagon was hit, and instructed his staff to evacuate the building.

Pence recalled walking across the street in the direction of the Capitol, telling Fox News he would “never forget the sights and sounds of that day.”

“The Capitol was hemorrhaging with people coming out of every door and running in every direction,” he said. “I looked to the west to see half of the sky was a clear, blue, sunny day, and the other half was filled with mud brown, and smoke, billowing out of the Pentagon.”

Pence later joined congressional leadership in the basement of the U.S. Capitol Police headquarters across from the Capitol building, where he learned that another aircraft was bound for the U.S. Capitol in a matter of minutes.

“I remember I looked right out the window to see the Capitol dome, and my immediate thought was the Capitol itself – this great symbol of democracy about to be attacked and destroyed – a structure that had inspired the world since the days of the Civil War,” Pence said, noting that, at that point, and for months after, “there were no Republicans and no Democrats in the room—just Americans.”

“That was the spirit that animated Washington, D.C. for the months that followed 9/11,” Pence said.

The 40 passengers and crew members of Flight 93, all of whom lost their lives, are believed to have prevented a larger attack by fighting back against the terrorists who hijacked the plane. The field in Shanksville, Pennsylvania, where the plane crashed, is just a 20-minute flight from the U.S. Capitol.

“I will always believe, it is likely that I was able to go home and hug my family because of what those selfless and patriotic Americans did on Flight 93, so for me, there is always a special place in my heart for the heroes on Flight 93,” Pence told Fox News. 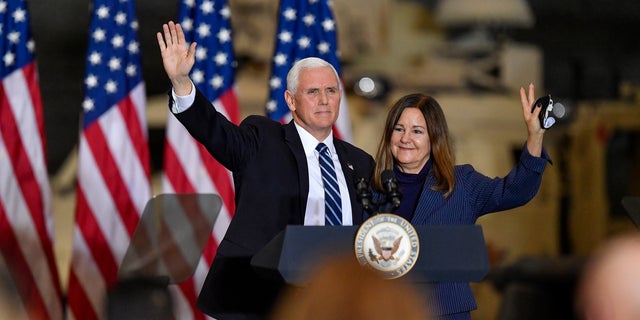 Pence recalled returning home to his wife, former second lady Karen Pence, and his three young children, on the evening of Sept. 11.

“We sat around the kitchen table and talked about what happened and prayed about it as a family,” he said, explaining to his children that “Daddy would be working a lot in the days ahead.”

“She looked up at me with her big brown eyes and said, ‘If we have to make a war, do you have to go?’” Pence remembered. “I dropped down on one knee and threw my arms around her, because, all of a sudden, I knew where her little heart was at, and I just said, ‘Daddy is too old.’”

But Pence said, “there is not a day gone by that I haven’t thought of every dad, every mom, every son, every daughter, every spouse, that answered that question differently.”

“Not because they had to, but because they chose to,” Pence said. “And nearly 6 million Americans have put on the uniform and defended our freedom and great sacrifice.”

Pence went on to describe the Biden administration’s move to withdraw all U.S. military assets from Afghanistan on Aug. 31 as “disastrous” and a “disgrace.”

“It dishonored the service and sacrifice of all of the men and women who fought and defended freedom throughout Operation Enduring Freedom and all of our efforts in Afghanistan,” he said. “It grieved me deeply to see that occur.”

Pence said it was “unconscionable” that Biden left “Americans and America’s allies behind.”

“He surrendered Afghanistan to the Taliban,” Pence said.

The former vice president told Fox News the Trump administration’s “deal” struck with the Taliban was “predicated on the credible threat of the use of force.”

“We made it clear. They were not to harm Americans, they were to work with the Afghan government, they were to commit to not be a safe haven, or we would hit them hard,” Pence said, noting that he was “with President Trump when he spoke with Mullah Baradar,” a co-founder of the Taliban, and recalled Trump saying, “if you break the deal, we’ll hit you harder than ever before.”

“We went 18 months without one American casualty, and we were on track for an orderly and dignified withdrawal,” Pence said, pointing to Trump’s original May 2021 withdrawal date. “But Biden inexplicably delayed the withdrawal, well into the fighting season, and had our military leaving before every American was out.”

Pence said the deal with the Taliban came together just weeks after the Trump administration took down Iranian Gen. Qassem Soleimani, and after the takedown of ISIS leader Abu Bakr al Baghdadi.

“They knew we meant business. The world understood that this was a president willing to use American military power to advance America’s interests,” he said. “This never had to happen the way it happened under the Biden Administration.”

He added: “It was a disgrace and it dishonored service and sacrifice.”