People have had to risk their lives to cast a ballot before in this country, but not because of a pandemic: John Lewis and his fellow marchers were bloodied on a Selma bridge 55 years ago this month, and that’s just one example. But even when there may not be a conscious desire to quiet the voices of one group in our democracy, the failings of our broken voting system surface in the worst of times to remind us how much of America still has left to fix.

Ohio, where I was born and raised, is providing another example today. Governor Mike DeWine has earned nationwide acclaim for his ready response to the coronavirus crisis. His seriousness has contrasted favorably with President Trump and, in a rarity for Republican officials these days, he listened early to those who knew the science and took action. DeWine was the first in the nation to shut down schools statewide. He moved quickly to restrict the movement of his constituents and to pressure venues to call off their functions, including professional and collegiate games and tournaments. He expanded unemployment insurance and instituted a liquor buyback program for bars and restaurants, incurring the wrath of some in his party.

DeWine’s effort to stop Tuesday’s primary elections in the state, however, is another story. It did prove successful, but the haphazard and confusing process that led to the eventual suspension of Ohio’s elections until June 2nd exposes the need for comprehensive voting reforms not just statewide, but nationwide. Voters need to have the knowledge that their democractic processes can withstand even the unthinkable.

For all of the praise DeWine has earned, he simply didn’t move quickly enough to suspend the March 17th elections. Louisiana, then Georgia, had given him a sort of precedent, suspending elections due to the pandemic —— but theirs were scheduled for April 4th and March 24th. Maryland, scheduled to vote on April 28th, suspended its primary on Monday until June 2nd. But DeWine waited until the day before to sue to stop polling places from opening. He had to do so because unlike the governor of Louisiana, he doesn’t have unilateral power to take this sort of action without the approval of Ohio’s Republican-controlled state legislature, which was not in session. 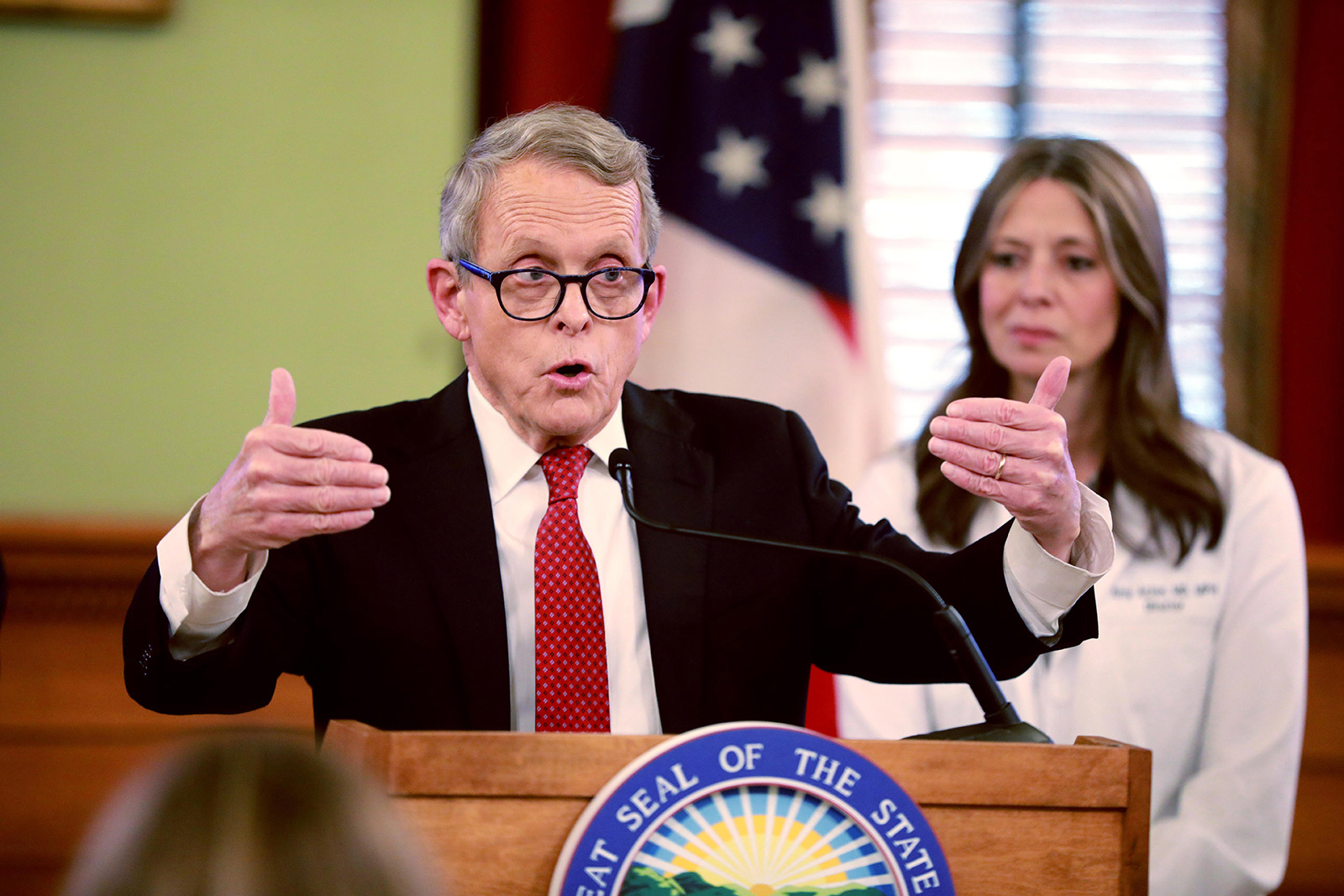 Ohio Gov. Mike DeWine addresses members of the media during a press conference updating the public on COVID-19 on Thursday, March 12, 2020 at the Ohio Statehouse in Columbus, Ohio. (Photo: TNS via ZUMA Wire)

The state’s Democratic Party chairman, David Pepper, ultimately signed onto DeWine’s lawsuit. But he also told Rolling Stone that Monday “was chaotic, confusing, and not a good day for democracy in Ohio. [DeWine and his administration] were simply not prepared to run a safe election but should’ve approached the legislature days ago to address the problem in a more deliberative way.” He had previously suggested that Ohio follow the lead of other states and adopt vote-by-mail procedures, while also shortening a suspension that at present is set for nearly three months.

Before the Ohio Supreme Court affirmed in an early Tuesday ruling that elections will not take place, DeWine’s emergency solution was going to be above the law. He had already announced plans to ignore the first court ruling denying him the ability to suspend the elections when Ohio Department of Health director Amy Acton issued an order late Monday night to follow DeWine’s instructions, not the court’s. She cited the danger of COVID-19 exposure, saying “to conduct an election at this time would force poll workers and voters to face an unacceptable risk of contracting COVID-19.” I have family and friends back home who all vote regularly, but that isn’t the only reason why I sympathize with DeWine’s decision, even though I regularly argue against anything that might impede someone from voting.

DeWine was probably doing the right thing, both for public health and democracy. Holding the elections in the midst of a pandemic has potential consequences beyond people getting sick. Doing so would possibly depress the vote disproportionately in localities and neighborhoods that are more disadvantaged, where polling places are more sparse and lines even longer. But that is where the true dilemma arises. If DeWine’s solution to a democratic dilemma is inherently undemocratic and perhaps even illegal, then shouldn’t that be setting off more alarm bells to fix the system?

Ohio State law professor and elections expert Daniel Tokaji told Rolling Stone on Monday, before the Supreme Court ruling, that “at this point, to not delay the primary is much more harmful than delaying it. I think it will result in utter chaos, confusion, and a lot of people not voting. If the primary goes forward tomorrow as scheduled.” But to Tokaji’s point, it is still too rare when voters do not experience some level of chaos and confusion around American elections, even when there is no similar threat of spreading disease.

“While the polls will be closed [Tuesday],” DeWine said in a Tuesday statement, Secretary of State Frank LaRose will seek a remedy through the courts to extend voting options so that every voter who wants to vote will be granted that opportunity.” But they had such a remedy on the table. When I asked Pepper why the state turned down his vote-by-mail approach to only later take a far more litigious and panicky route, he said that the governor had “said they’d consider it, but that it would be difficult.” More difficult than wrangling the courts at the last minute to stop elections, without a firm plan as to how the state will move forward?

Arizona, which proceeded with its primary as scheduled on Tuesday, saw its Maricopa County, which is more than 30% Hispanic and Latino, try a vote-by-mail option as late as last week —— but Republicans blocked it via the courts. Myrna Perez, the director of the Voting Rights and Elections program at New York University’s Brennan Center for Justice, told Rolling Stone that other in-person options, such as expanded early voting periods, were needed to ensure both a fair process and proper social distancing. (In a Tuesday morning statement, Pepper’s Ohio Democratic Party outlined a series of similar recommendations, including increasing the availability of absentee ballots to those who have yet to vote and including pre-paid postage to avoid what the party calls “a de facto poll tax.”)

“What is critical,” Perez added, “is that we do not see a delay of the election in November. People [should] use this time now to figure out what sort of scenario planning and what sort of emergency planning they need to undertake in order to make sure that the November election can go off smoothly.”

The question of whether or not to suspend elections to protect against the coronavirus also seems like an especially urgent problem because Americans can rightfully suspect this president of seeking any avenue to remain in power. The possibility of Trump exploiting a global pandemic to cheat in November’s election seems like a virtual certainty, so our officials should plan for it. But they need the tools to do so. The pandemic is but the latest crisis that reveals just how irretrievably broken our voting system is in America.

We could debate the absolutes: should a state suspend an election, or keep the polls going? At what price, the vote? In his press conference to announce the lawsuit on Monday afternoon, DeWine claimed that his lawsuit was not “a perfect decision,” but that “it doesn’t force people to choose between their health and their constitutional rights.” Perhaps it wouldn’t do so ultimately, since people can vote absentee by mail, but that misses the point.

Postponing the election will not have a profound effect on whether or nor Joe Biden or Bernie Sanders becomes the Democratic nominee. But it may well reshape the lives of Ohio voters more profoundly because candidates who had budgeted to make it to March now have to press on until June.

As November approaches, there is time for short-term triage that will get us through the general election. Every state and U.S. territory needs to view this coronavirus catastrophe as a threat not just to public health, but to democracy, and as Perez said, come up with a national strategy for November if this crisis continues until then. Even if it doesn’t, the panic gripping the nation will likely not subside as quickly as the infection. People will still be scared to go and vote, and politicians and campaigns — perhaps Trump — may stoke that fear.

We cannot judge the faults in our institutions by whether or not bad outcomes surface due to willful acts. We have seen voter turnout lowered and restricted by both the billy club or a formal statute, but it can also happen due to bad planning and inattention to needed voting reforms. To officials like DeWine, the consequences of depressing the vote through the aforementioned chaos and confusion should be as unthinkable as a pandemic. It can determine how a community is represented, governed, or even judged in court, all due to factors that it could not control. We are dealing in absolutes as to whether or not it’s right to call off elections out of caution for our president, which is as startling as it sounds. But our leaders shouldn’t be trying to figure out on the fly how Americans can still have a voice in this democracy.