Masimo Corp. Chief Executive Officer Joe Kiani has waged his share of hard-nosed patent fights with competitors in the medical device field, but says his current battle with Apple is taking things to a new level.

Masimo, a manufacturer of signal-processing technology for health-care monitors sued Apple in January 2020, accusing it of stealing trade secrets and improperly using Masimo inventions for health monitoring in the Apple Watch. Yet, the case has been bogged down for almost two years by Apple’s challenges over the validity of the patents and disputes over access to information.

“I’ve been through three major litigations,” said Kiani. “Apple’s refusing to even play by the rules set by the court.” 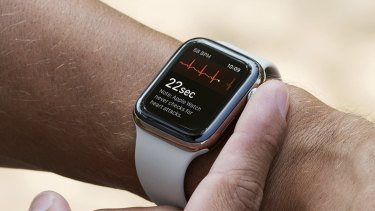 Masimo is accusing Apple of stealing trade secrets and improperly using its inventions for health monitoring in the Apple Watch.

The courtroom delays, Kiani said, prompted Masimo to file a complaint in June at the International Trade Commission, seeking to block imports of the Apple Watch Series 6.

The California-based Masimo hopes the ITC can more rapidly give it the relief it seeks as the civil case winds its way through court. Masimo and its spinoff, Cercacor Laboratories, first sued Apple in January 2020, accusing it of stealing trade secrets.

An email exchange that Kiani says indicates Apple Chief Executive Tim Cook may have been personally involved in the hiring of a Cercacor executive is the latest flash point in the civil case. Masimo says the executive took the company’s secrets for ways to measure oxygen in blood and then sought patents listing himself as the inventor.

Apple, which denies using Masimo’s inventions in its Apple Watch, told a court that Cook wasn’t involved in the hiring of Marcelo Lamego, who had been the chief technology officer at Cercacor. Attorneys for Lamego didn’t respond to messages seeking comment. In court documents in a separate suit against Lamego and his new company, he denied any theft of secrets.

‘Apple just unfortunately does business this way. This is not a way a company should behave.’

Apple representatives declined to comment for this article. In a court filing, the company said the judge had already rejected Masimo’s request, and the Cook email doesn’t show anything new to warrant getting access to his electronic documents.

“It is unremarkable that Apple’s CEO forwards unsolicited emails that do not require his personal involvement or attention to his employees — in this case with no comment or guidance about whether or how that employee should handle the email,” the company said in the filing.

Kiani founded Masimo in 1989 when he was just 24 — armed, he said, only with patents on ways to reduce errors in non-invasive tests for blood-oxygen content. Masimo had grown to more than $US1.1 billion in sales last year, still a niche player in the medical device industry and with a history of punching above its weight and winning.

Hospital device maker Nellcor, now part of Medtronic, paid Masimo more than $US330 million in a 2006 deal to end a six-year fight over the machines. A long-running dispute with Royal Philips ended in 2016 with the Dutch company paying $US300 million and the two becoming partners in the marketing and sales of patient monitors.

Before the Nellcor case settled, “a Nellcor vice president told me, ‘We’re going to squash you like a bug.“’ Kiani said. “Apple thinks the same way. They think the rules don’t apply to them.”

The difference with Apple, he said, is they “not just copy us like those companies did, they also took our people.”

Kiani said he was assured by Apple executives that the new employees weren’t going to work in the same field.

Lamego was at Apple for seven months before he was fired. He started his own company, True Wearables, which Masimo also has sued.

“Patents began publishing with Marcelo Lamego as inventor,” Kiani said. “He had patented things, some of the things we had done 20 years ago and were in our products. This was worse than we thought. That’s when we first sued Apple.”

Lamego sent Cook an email at 1 am on October 2, 2013, saying he is “positively sure I could add a significant value to the Apple team, if I was given the chance of becoming part of it in a senior technical executive position and without conflicting with the large IP I have developed for Masimo and Cercacor during the same period.”

Nine hours later, Lamego was in contact with an Apple recruiter, court records show. Masimo, based in Irvine, California, said in a filing that getting more information from Cook’s electronic records could bolster its argument that Apple “knew it was obtaining Masimo’s trade secrets.”

Lamego, in a deposition for the suit against his company, said Kiani has been playing hardball, too. On his last day of work, he said, Kiani called him and “said he was going to ruin my life professionally and personally.”

Masimo learned of Lamego’s email to Cook when Apple sent the company information as part of the suit against True Wearables. Apple, in court filings, said Masimo’s demand for more information, including Cook’s electronic information, is “irrelevant and overbroad.”

Masimo has won a court order that prevents True Wearables from obtaining patents that list Lamego as an inventor until the dispute is resolved. True Wearables is appealing that decision, saying Lamego developed the inventions separate from his work at Masimo and Cercacor and the order is hurting his new company’s ability to operate.

Kiani likened his dispute to one in which sound system maker Sonos claims Google offered a working relationship only to copy the inventions.

“This is a lot more than just Masimo,” Kiani said. “Apple just unfortunately does business this way. This is not a way a company should behave.”