Less than a day after New York officials placed the suburb of New Rochelle under an official containment over the coronavirus outbreak, residents are still trying to understand what it means for their everyday lives.

Erin Harrell Riley, who lives within the containment zone, had to start working from home, as did her husband, who works in Manhattan. Their 4-year-old daughter’s school shut down last Sunday and their usual babysitter, a student at the nearby Iona College, went back to her hometown after her campus shut down.

“I believe people are taking this seriously,” Riley, 40, told HuffPost on Wednesday. “The streets are very quiet. There’s not a lot of traffic or cars, but for the most part, there’s a sense of calm yet apprehension.”

Last week, Riley assumed based on local news reports that they were living close to the first patient who was diagnosed with the coronavirus in New Rochelle, the epicenter of an outbreak just outside of New York City.

Her suspicion was confirmed on Tuesday when Gov. Andrew Cuomo (D) announced that he was sending the National Guard to her area.

Riley’s neighborhood was within the containment zone, listed on an official map.

“New Rochelle is a particular problem,” Cuomo said at a press conference Tuesday night. “The numbers have been going up, the numbers continue to go up, the numbers are going up unabated, and we do need a special public health strategy for New Rochelle.” 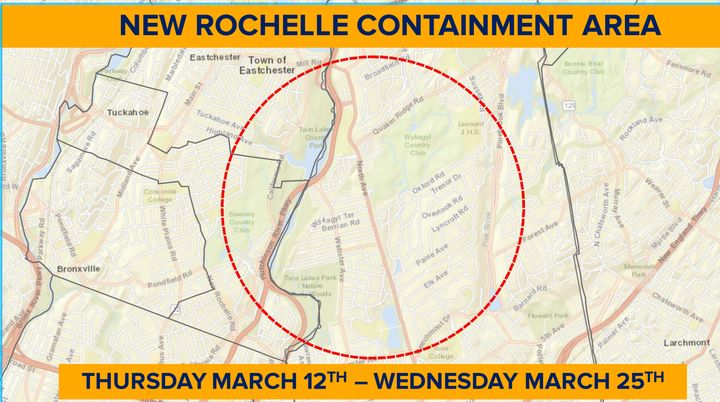 Riley received the news that she lived within the containment area when she saw the press conference on the news.

“I was a little taken aback,” she said. “I can imagine communicating this type of information is challenging, [but] you would have hoped you could have [received] the information on the inside first.”

As of Wednesday afternoon, Riley was still trying to understand what the official rules of her quarantine were. Under Cuomo’s order, residents are banned from attending large gatherings at schools, community centers and places of worship within the containment zone.

However, the public roads remain open and residents can move freely to grocery stores. Riley has been able to visit her elderly father at his home outside of the containment zone to bring him supplies, as he is also not leaving the house.

Riley said it has been difficult to find a single specific source of information that keeps her updated on the containment.

“I don’t know if we were getting accurate, clear-cut, clean communication,” Riley told HuffPost, saying she’s seen at least one media outlet report incorrect information. Her husband had to double-check the information on New Rochelle’s city website, which debunked the report.

“Even now, things are still getting a little bit muddled,” Riley added.

In an interview with NPR on Wednesday, New Rochelle Mayor Noam Bramson said there was “actually a great deal of confusion about that” when asked how the containment zone worked.

Bramson held a separate news conference, which officials posted to YouTube on Wednesday, to clarify that the containment did not mean the entire area was under quarantine.

“It is very important to clarify that this is not an exclusion or quarantine zone. No one is prohibited from leaving the area,” he said. “It is purely a prohibition on large gatherings in order to make sure that the spread of the virus is mitigated to the greatest degree possible.”

New York has the second-highest number of reported cases of the virus known officially as COVID-19. While the state has 173 cases total, 108 of those cases were in New Rochelle.

The containment zone established Tuesday is everything within a one-mile radius of the Young Israel congregation. An attorney and member of the synagogue who got the virus is believed to have passed it on the dozens of others. The synagogue’s rabbi also admitted he had tested positive for the virus, and members of the congregation were placed under a precautionary quarantine last week. 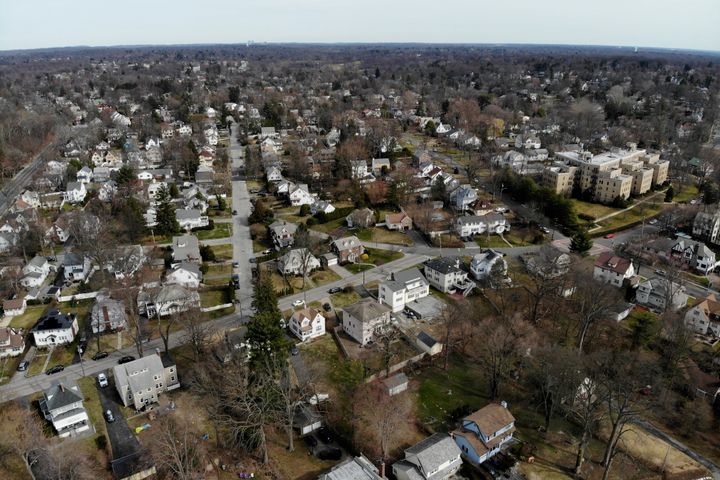 Cuomo said Tuesday that setting up a containment area in New Rochelle was necessary to slow the spread of the virus. The containment is scheduled to last until March 25.

“This is literally a matter of life and death,” Cuomo said Tuesday night. “That’s not an overly rhetorical statement.”

The governor deployed the National Guard to the containment area to clean public places, including schools, and deliver food and supplies to residents.

As of Wednesday afternoon, Riley had not seen any National Guard troops as she ran errands around her town and visited her father outside of the containment zone.

The only change she’s seen in her area is the presence of state police monitoring the area, along with the usual town police.

She also said the main roads, which are typically busy with students and cars, are quieter than usual.

Riley noted that the people in her community don’t seem overly panicked, but they are concerned about what to do next.

“I think people are thinking, ‘What will it look like next?’” she told HuffPost, noting that she also felt uncertain about the future. “What will this look like over the next few days or weeks?”