Andrew Pridham is not about to give up the two things "in his blood" – his love of bricks and mortar and his passion for the Sydney Swans.

Having been at the helm of Moelis Australia from its inception a decade ago, 53-year-old Pridham is moving into the vice-chairman seat at the investment manager to focus on property. "I was CEO for 10 years and just felt it was time for a change," says Pridham in an exclusive interview with The Sydney Morning Herald and The Age.

"I'm 53 and will spend at least the next 10 years working with the team on our core sectors of real estate and credit. Bricks and mortar are in my blood." 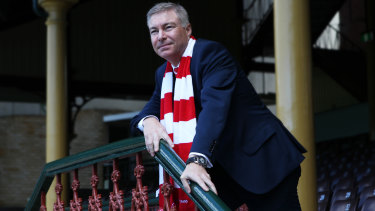 Pridham will leave the day-to-day running to his joint founders and new co-chief executives Julian Biggins and Chris Wyke.

Also in his "blood" is his beloved Sydney Swan football team, where Pridham has been chairman since 2002. Having spent his childhood in Adelaide, he developed a love of the "Sherrin" footy and when he moved to Sydney became involved with the Swans.

Under his chairmanship, Pridham mentored the high-profile Adam Goodes, from his stellar football career including two Brownlow medals and grand final victories to the booing and racial abuse that eventually led him to retire. "The whole nation was transfixed by it and it was a very difficult time for Adam but the club gave him all the support we could," Pridham says.

"There was a lot of emotion and a lot of misinformation and very outdated views."

There have also been public fights with the AFL over Sydney's cost of living allowance as well as the controversial shifting of the Swans' home games from the ANZ Stadium to the Sydney Cricket Ground. The next big step and perhaps one of the biggest is the move into the Royal Hall of Industries at Moore Park. It is a $60 million investment that will allow the Swans to expand training facilities that will pave the way for the creation of a women's team.

"When I look back over the years we have had all manner of dramas, but there are things that come up and we just have to deal with them the best way we can," Pridham says.

Redcape bought the Beach Hotel in Byron Bay for $100 million.

"I learnt early on to just try and do the right thing and then you stay on the right side of history."

Pridham cut his teeth at investment bank UBS where he quickly rose to be the head of the property division and oversaw the lion's share of major deals from the late 1990s. Included in his close group of contacts was Sir Frank Lowy where he masterminded a large number of the then Westfield empire's expansion.

More recently he was involved in Moelis emerging as the victor in the race to buy the Byron Bay beach pub. The firm paid just over $100 million for the iconic hotel on the popular Main Beach.

"When we looked at the pub, we were very community-focused and made sure that whatever we do and how we you manage it and refurbish it, it is consistent with what the community wants," Pridham says.

The hotel will fall under Moelis' listed pub arm, Redcape Hotel Group, under the helm of Dan Brady. The group has now taken possession of the pub, which was developed by the television actor and close friend to the late Kerry Packer, John"strop" Cornell.

Brady says there are plans to overhaul the pub and reintroduce poker machines.

Pridham, who remains a major shareholder in Mobilis, will focus on building up the $4 billion of funds under its management across Australia and offices in Shanghai and Beijing.

"I'm not a person who jumps out of bed to do admin," he says.

The Swans, on the other hand, give him plenty of reason to get out of bed. The AFL season kicks off on March 21.

"In the role [as chairman] it gives me a different perspective on life. The supporters of the Swans range from butchers to billionaires but they are all passionate.

"It has certainly helped me personally to be a more rounded person and I've had a lot of enjoyment in the role."

The author is an ambassador for the Sydney Swans.