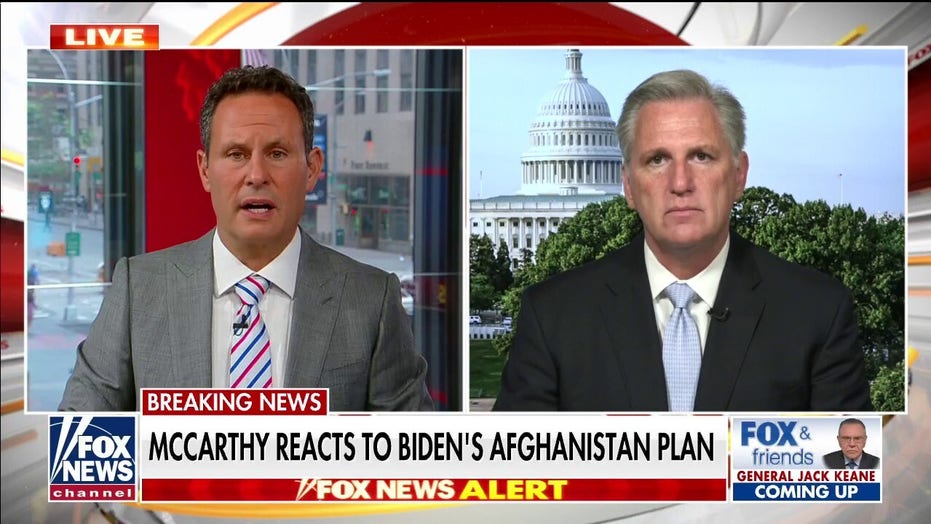 McCarthy rips Biden for ‘trusting’ the Taliban: He’s ‘allowing the Taliban to choose our foreign policy’

House Minority Leader Kevin McCarthy, R-Calif., left open the possibility that Republicans would seek to impeach President Biden over his handling of the troop withdrawal in Afghanistan that cost at least 13 American service members their lives.

At a news conference Friday, McCarthy sidestepped a direct question on whether he backs those efforts, but signaled the president will be held accountable at some point.

“I’m extremely frustrated with this president,” McCarthy told reporters at the Capitol.

“There will be a day of reckoning,” he added.

McCarthy, who is banking on Republicans retaking the House in 2022 and becoming the next House Speaker, said Biden has “lost” the faith, trust and confidence of the American public. But he said the immediate concern right now is getting Americans safely out of Afghanistan by Biden’s Aug. 31 withdrawal deadline.

He called on House Speaker Nancy Pelosi, D-Calif., to bring Congress back into session so members could get another Biden administration briefing on the situation in Afghanistan. Pelosi arranged a briefing for all members already earlier this week on Tuesday, but McCarthy said lawmakers should be back in Washington for another because there are so many unanswered questions.

Pelosi said Thursday that congressional leaders were also briefed by Defense Secretary Lloyd Austin and “further conversations among top Administration officials and Congress will be ongoing.”

McCarthy also urged Pelosi to allow a vote on legislation authored by Rep. Mike Gallagher, R-Wis., that would aim to block Biden from withdrawing troops by Aug. 31.

He accused Biden of being the only president – Republican or Democrat – that would allow the Taliban to dictate the terms of U.S. troop removal in Afghanistan and said Biden’s speech to the nation Thursday night following the terrorist attack on U.S. service members was “a picture of weakness and incompetence.”