Richard Barnett appeared more comfortable lounging in the office of House Speaker Nancy Pelosi than he was at a Thursday federal court hearing.

The Arkansas man, charged with multiple criminal counts including theft in connection to the Jan. 6 Capitol riots, briefly erupted during a routine status conference when he was unable to communicate directly with his attorneys because of the virtual nature of the hearing, saying it was not “fair.”

Barnett, famously photographed with his feet propped on Pelosi’s desk, has been seeking his release pending trial. But his frustration boiled over Thursday while participating in the hearing virtually from the D.C. jail, a concession to the coronavirus pandemic. 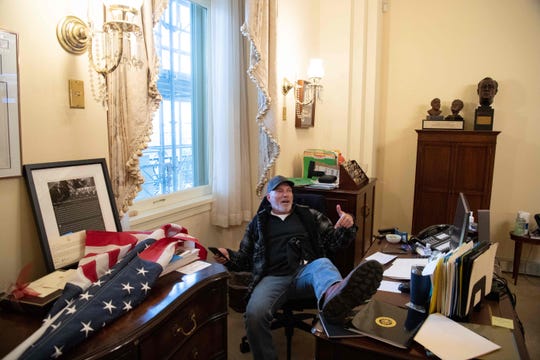 A supporter of U.S. President Donald Trump, Richard Barnett, sits inside the offices of U.S. Speaker of the House Nancy Pelosi as he protest inside the U.S. Capitol in Washington, DC, January 6, 2021. Barnett was arrested on Jan. 8. (Photo: Saul Loeb, AFP via Getty Images)

The Thursday court hearing addressed logistical matters in the case, not Barnett’s detention.

Joseph McBride, an attorney representing Barnett, said after the hearing that he was continuing to seek his client’s release, indicating that Barnett’s new-found notoriety has likely contributed to his continued detention.

“This is the United States of America,” McBride said. “You are innocent until proven guilty … Absent that picture, do I think he would be out? Yes, I do.”