Deutsche Lufthansa has confirmed it is looking for German government support amid the coronavirus crisis, which could burden travel demand for months. 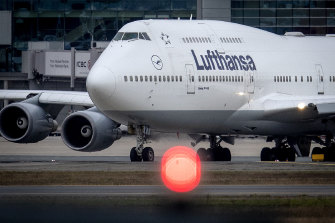 German airline Lufthansa has confirmed it is asking the government to help cover wages as flight cancellations soar amid the coronavirus crisis. Credit:AP

To avoid layoffs after slashing capacity by as much as 50 per cent, the airline is examining the implementation of so-called "short-time work", the company said on Sunday.

The program – known as "Kurzarbeit" in German – involves the government offsetting wages lost when companies are forced to temporarily halt work.

With some countries restricting flights from Germany, which has more than 800 cases, "the impact on our booking situation is immense," chief executive officer Carsten Spohr said in an internal memo to employees.

"We must assume that it may take months before we will see first signs of stability."

Italy's decision to restrict movement for a quarter of its population comes on top of the cancellation of large events such as the Geneva Motor Show and the ITB tourism fair in Berlin. The International Air Transport Association estimated carriers may lose as much as $US113 billion in ticket sales this year.

Virgin Australia – Australia's second-largest airline – estimates the coronavirus will slash earnings by up to $75 million in the six months ending June 30. Chief executive Paul Scurrah will ask the federal government to rein in fees at the country's major airports as the fallout from the virus hits.

British regional airline Flybe was last week on the brink of collapse. The carrier – already struggling before the coronavirus outbreak – has been plunged into fresh crisis as travel demand plummets. 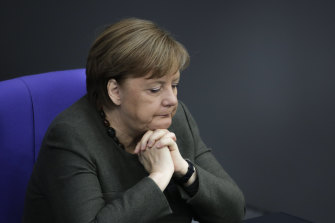 German Chancellor Angela Merkel. Her government is looking at ways to ease pressure on the economy amid the coronavirus outbreak.Credit:AP

German Chancellor Angela Merkel's ruling coalition was meeting on Sunday evening in Berlin to map out a strategy to mitigate the damage to Europe's largest economy.

Looser rules for Kurzarbeit, which would make it easier for companies to apply and could increase payouts, are on the agenda.

The fallout from the virus risks damaging Germany's export-oriented economy, which narrowly avoided recession last year and is expected to struggle in 2020.

China is Germany's largest trading partner and German manufacturers, especially in the automotive industry, have deep ties with suppliers in northern Italy, the epicentre of the crisis in Europe.

On Friday, Lufthansa cited "drastic declines in bookings and numerous flight cancellations" in recent days, saying all of its traffic was now affected. The company acted after investors started to question its ability to withstand the downturn.

The company's five-year credit default swaps, which bondholders buy to protect their holdings against a potential default, more than tripled in the last 10 trading days to the most expensive level in seven years.

In his message to employees, Spohr said that Lufthansa has taken steps in the last few days to increase liquidity with the banks. The airline is in talks with governments in Germany, Belgium, Austria and Switzerland, as well as European Union officials, to "reduce burdens on our industry," he said, without elaborating.

Lufthansa has a credit rating of BBB at Standard & Poor's, the second-lowest investment-grade rating, and Baa3 at Moody's, one level above junk.

The German airline group said on Sunday that it was seeking ways to keep all employees on board during the crisis, with talks ongoing with unions and its partners to avoid layoffs.

"Our primary goal is to minimise losses and to secure the company's liquidity," said Spohr, adding that "numerous insolvencies" could hit the airline sector in the fallout from the virus.