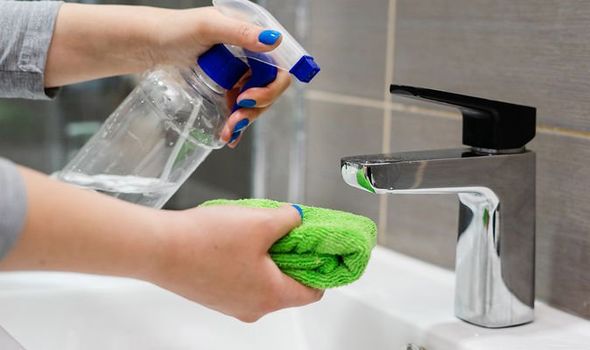 Cleaning star Mrs Hinch, whose real name is Sophie Hinchliffe, became known after sharing her handy cleaning and tidying tips on social media and TV. She now has an impressive four million followers on Instagram and has even authored several books. Now, fans of hers have created their own social media groups dedicated to cleaning and tidying tips.

One of the groups, which has over 742,000 members, receives a plethora of tips each day from Mrs Hinch fans.

A cleaning enthusiast asked: “Best thing for watermarks and limescale?

“I’ve used Viakal galore but whenever it dries it looks like this again.”

The fellow cleaning fan shared a photo of her stainless steel taps which were covered in white water marks and crusty limescale.

The post was inundated with over 200 comments from Mrs Hinch followers who suggested using a cheap hack – white vinegar.

One user said: “I live in a hard water area. I use distilled vinegar. Smells terrible, looks great!

“But we buff up the taps every time the shower is used. My family has been trained!”

“Limescale is alkaline, vinegar is acid and dissolves the limescale.”

A fifth said: “White vinegar, spray on taps. Brings them up shiny. That’s what we use.”

Multiple other users simply commented “white vinegar” on the post.

Another suggested: “Spray on white vinegar then leave for 30 minutes, then wipe off.”

You can buy Stardrops White Vinegar Spray from B&M for just 79p.

The product claims it can also be used as a stain remover on clothing.

One person said: “Shaving foam works well. Rub it over taps, leave a little while, then buff with a dry cloth.”

Another Mrs Hinch fan replied: “The Pink Stuff the paste one it’s the only one that shifted it for me.”