AMP’s shares climbed by about 4 per cent on Tuesday as Ms George sought to start a new chapter in the 172-year-old company’s trajectory after a bruising past few years, which has included systemic misconduct charges following the banking royal commission and a sexual harassment scandal last year. 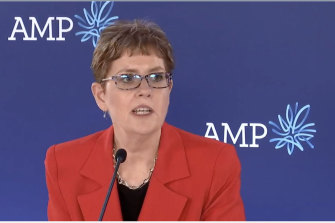 Ms George outlined a three-part strategy to pursue growth, which includes investing in AMP Bank, “transforming” financial advice and building new retirement products, during her first investor day as chief executive after taking on the job from Francesco De Ferrari who resigned abruptly in April.

She pledged to make AMP’s loss-making financial advice business sustainable by 2024 alongside additional cost reductions of $115 million within three years, which prompted Morningstar analyst Shaun Ler to query how AMP could grow while stripping costs.

One pillar of Ms George’s strategy is to “explore” opportunities with external providers, including fintechs, to improve services, processes and products, while avoiding the need to build technology from scratch. Ms George said AMP could launch a digital-only mortgage product next year, to cash in on the ongoing heat in Australia’s property market.

“Of course, in this new world, we have to understand we can’t build everything ourselves. We don’t have the capacity, we don’t have the capability,” Ms George said. “And in my mind, learning to partner better with fintechs, traditional suppliers, and other players in the market, will become a skill that we have to hone, a very important skill.”

Ms George said AMP was “looking for partners” to help grow AMP Bank, a branchless and digital-only lender that retains about 1 per cent market share. Ms George said ambitions to grow the bank were starting off a low base but pledged to reduce mortgage approval times by 30 per cent.

“The operational capacity has been our constraint, not necessarily the ability to attract customers,” she said. “Partnering is a skill we must have, we must develop and we need to move forward on.”

The leadership change-over came after AMP faced a board purge following a sexual harassment scandal that caused AMP’s share price to plummet, staff to resign and the company to lose investment mandates from large clients.

The scandal, combined with six months of unsuccessful merger negotiations with US investment firm Ares, triggered the demerger of AMP Capital’s private markets business that manages unlisted global infrastructure and real estate assets. Among Ms George’s top priorities is managing the demerger and listing of PrivateMarketsCo on the ASX by June next year.

PrivateMarketsCo chief executive Shawn Johnson said he had spent the past few months seeking feedback from investors and clients about the company’s next phase of growth, which includes creating new products and investment strategies. Mr Johnson said the reputational and branding costs to the company were not as severe internationally as in Australia, after an investor revolt caused chair David Murray and others to resign.

“As far as the past and what the issues were that impacted AMP and AMP Capital, I’d say the further removed from Australia, it’s not as palpable but still these are all very, very well informed investors and they are very knowledgeable,” he said. “The reaction has been not quite as you might see it in Australia but certainly has been negative by our institutional clients globally.”