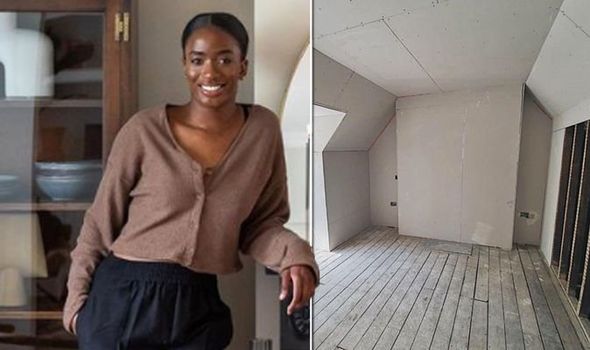 Liv and her partner Rob have been renovating their 1950s North London former council house and documenting the journey on Renovating Chez Nous. The couple bought the run-down property for a bargain at under 300k.

The two-bedroom, split-floor home has not been renovated since the 80s and was a huge undertaking for the young couple.

Liv, also a midwife, spoke with Express.co.uk about the journey.

Liv, who documents the renovation on her Youtube channel, said: “It was actually really interesting to see, it being a property that like hadn’t been renovated for so long time.”

Since being built in the 50s, the North London property has been tweaked and decorated numerous times.

Elements of the home, including piping and electrics, had not been updated in decades and were potentially dangerous.

As such, the couple decided to take the home back to brick and discovered some exciting elements on the home in the process.

Liv explained: “We were getting rid of stuff in the demolition and we were discovering loads of secret space.”

Carefully using the space meant the couple has freed up more room.

“In the bedrooms, we managed to create a wardrobe in the eaves,” she said.

“Originally, that was completely covered up with a wall.

DON’T MISS
Changing Rooms returns with ‘animal prints’ and ‘something wild’ [INTERIORS]
How to increase your property price – feature that could add £50k [PRICES]
‘Save a ton of money’: Couple share dramatic DIY bathroom renovation [RENOVATION]

“It was such an amazing find. We would have never found that if we didn’t do the demolition ourselves.”

She went on: “One evening I was hammering down the plaster to get through to the brick.

“I got to one side of the wall where my hammer was going straight through it. I thought, what’s going on?

“We got a torch and had a look, and we had all this space. We’ve built a wardrobe within this space, so we have more space in the bedrooms.”

This is not the only way in which the couple has made extra space in their council home renovation.

“It’s the same as the hallway,” she explained.

“We’ve managed to kind of extend the bathroom space because we’ve discovered more space. And we’ve made space downstairs as well.”

She also described the process of creating DIY alcoves in the home from scratch.

She had the idea to craft alcoves and a faux fireplace around an electric fire in the living room.

She said: “I just came up with it myself.

“When the plasters came in, I basically drew out exactly how I wanted the walls to be done up.”