The airline announced the massive cuts after days of speculation it would wind back operations significantly in the wake of sweeping travel bans, including advice from the federal government for Australians not to travel abroad. Its shares closed down 15 per cent at $2.14, with boss Alan Joyce declaring the aviation sector was in "crisis". 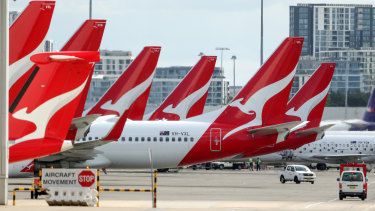 Qantas will suspend international flights and temporarily stand down two-thirds of its workforce from the end of March.Credit:Bloomberg

Qantas said on Thursday it would ground its entire international fleet until at least the end of May, further extending the capacity cuts it announced earlier in the week. Mr Joyce also left the door open for further cuts to domestic capacity and a longer grounding of its international fleet.

The changes left investors and analysts concerned about how long it would take for Qantas to recover, with some analysts saying it could be longer than six months before demand for international air travel returns.

"This will be more like September 11 than SARS", said one analyst who asked not to be named, pointing to the years-long impact the terrorist attack on the US had on air travel and the resulting collapse of Ansett Airlines.

The entire aviation industry has been under immense pressure in the wake of travel bans around the globe, with local industry watchers nervous about the financial strength of both Qantas and its debt-heavy rival Virgin Australia, which has also slashed capacity while slapping down questions about its solvency.

Market experts said the focus would be on how quickly Qantas burns through its cash balance, which stood at $1.7 billion at the end of December. Virgin has around $1 billion in cash.

“It’s all down to whether they have liquidity or not,” said Tony Webber, a consultant at Airline Intelligence and Research.

“That’s a function of how long this lasts for, it’s a function of the extent to which they can reduce some of these costs – put off operational staff, maybe even sell aircraft, which will be hard in this environment.”

Dr Webber, who was formerly Qantas’ chief economist, said he expected the airline to further cut domestic capacity as demand tanks due to government advice around self isolation and potential travel restrictions between states.

Qantas had a strong 2019 with its revenue from flying (excluding frequent flier points income) hitting $16.3 billion. While Qantas will continue to run some domestic services, analysts expect it to take a massive revenue hit. That hit could be more than $2 billion based on the $44 million it earned each day flying in 2019 and the fact that flying will be severely curbed for all of April and May, if not beyond.

Qantas's wage bill for 2019 was $4.3 billion. The airline will allow staff to use up annual leave and get early access to long service leave, in a move the Australian Council of Trade Unions called a "staff bailout". The stand-down of two thirds of its workforce could produce a $236 million-a-month cost saving for the company once leave entitlements run out.

Qantas chief executive Alan Joyce left the door open to further cost cuts and extending the grounding of its international fleet when the airline reviews conditions in April.

"We will have to assess then whether to dig further deeper, or to put capacity back on," he said.

"This is a terrible day," Mr Joyce said. "I never thought as CEO I would have to stand down two thirds of our people… and there may even be more.'

"This is the biggest crisis aviation has ever been through," Mr Joyce said.

Asked whether the airline would ask for more support from the government in addition to the levy waiver, Mr Joyce pointed to Qantas' "really strong balance sheet. We have a strong cash balance and an investment grade rating."

"We'll be okay financially," he said. The airline will also delay the payment of its dividend from April 9 until September 1, and senior executives and the board will take a 100 per cent pay cut until at least the end of the financial year, up from 30 per cent earlier, joining the chairman and CEO in taking no pay.

This is the biggest crisis aviation has ever been through.

Qantas paid shareholders $1 billion last financial year through dividends and share buybacks. It returned another $400 million in capital to shareholders through an off-market buyback in November.

“They’ve got a cost base of planes and people, so they’ve got to do what they can to bring the cost base down for the period that these restrictions are enforced,” he said.

Mr Brown said investors were weighing up whether Qantas could make it through the crisis and get its planes back in the sky with its balance sheet intact. A cause for confidence was the likelihood of government support given its importance for the tourism industry and broader economy, he said.

“Where the share price is, people are saying there’s going to be a significant impact on earnings… but it’s not fatal,” he said.