The White House, under fire about their use of migrant children detention centers that Democrats ripped into under former President Donald Trump, noted Thursday that the facilities are providing educational services — even as schools nationwide struggle to reopen.

Asked about the uptick of migrants at the border — as well as progressive Democrat backlash to the Biden administration’s handling of it through the use of detention centers, White House press secretary Jen Psaki defended the effort as humane.

“What is happening now is there are children fleeing prosecution, fleeing threats in their own countries, traveling on their own, unaccompanied to the border. And our focus is on approaching this from the view of humanity and with safety in mind,” she told reporters at a White House briefing Thursday.

Psaki went on to say that children are processed as quickly as possible through Customs and Border Protection, ideally within three days, and then transferred to Health and Human Services facilities where they await being placed with vetted families.

She then explained that a new HHS facility, the one that sparked hypocrisy accusations over past allegations of keeping “kids in cages” during the Trump administration, was opened because children needed to be able to practice social distancing measures and follow other COVID-19 protocols.

The new space, has “been revamped. There’s educational services there. There are health services and medical services.”

“Our best option, in our view, is to get these kids processed through HHS facilities, where there are COVID protocols in place, where they are safe, where they have access to educational and medical care. There are very few good options here, and we chose the one we thought is best.” 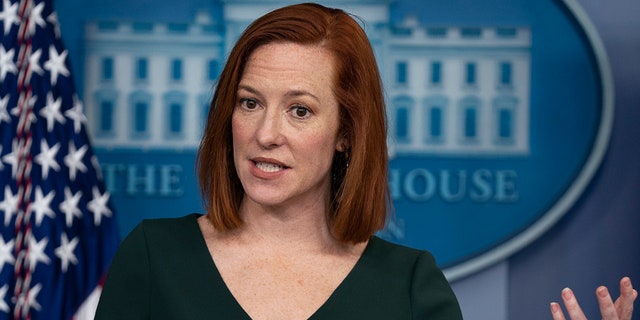 While the Biden administration continues to make sure those educational facilities are up and operational, Psaki and other officials continue to evolve their stance on in-person schooling.

The administration has shifted its positions on everything from changing timelines on re-opening to concerns about how many days per week students could return for.

The White House has faced ramped-up pressure to re-open schools in recent weeks as fed-up parents fume over delays due to teachers union resistance, despite a green light from federal health officials.

That pressure only increased after Dr. Anthony Fauci, the nation’s leading infectious diseases expert, said that it would be “optimal” but not essential for all teachers to be vaccinated before returning to the classroom.

Biden, a friend of the teachers unions, has refrained from using his influence to quash dissent from groups in some of the nation’s largest cities.

Asked about that resistance Thursday on ABC’s “The View,” Psaki said that the administration’s focus was on returning children to school “safely.”

“We are confident that we can re-open schools, we can re-open them safely and that we can do it quickly,” she said, adding that the White House believed vaccinations “should be prioritized for teachers — and half the states in the country are actually doing that — but they shouldn’t be a prerequisite.”

“Masking and social distancing can be part of that,” she continued, saying that the president was focused on getting schools they money they would need to make the necessary changes to re-open through his $1.9 trillion COVID-19 relief package.

In that same interview, Psaki was pressed about migrant detention centers and the backlash to them.

She pledged that the facilities were being used for the children’s benefit and protection.

“We had to have educational services, so we could have legal services and medical and health services and have those kids there treated humanely until we can find proper homes, family placements for these kids,” she told the program.

The White House did not immediately respond to The Post’s request for comment.