Comedian Jon Stewart said in a new interview he was surprised at the major pushback to his espousement of the coronavirus lab-leak theory and wondered how it got “politicized.”

The former “Daily Show” host shocked media observers in June when he launched into a passionate bit on “The Late Show with Stephen Colbert” about the coincidence that the Wuhan coronavirus emerged in a city with a superlab that experimented on bat coronaviruses, saying, “The disease is the same name as the lab!”

In an interview with The Hollywood Reporter about his new Apple TV+ project, Stewart cited the Colbert interview while discussing the power of Twitter.

“It’s democratized connection and also democratized destruction,” he said. “Not to quote MC Hammer, but you can’t take the measure without considering the measurer. It’s kind of the point I was making on Colbert that everybody got mad about, which was, “These are just tools, we’re the ones that f— them up.”

“You’re referencing your June appearance on The Late Show where you went all in on the theory that the coronavirus originated from a lab in China. I couldn’t tell if Colbert was entertained by your bit or maybe a little nervous,” reporter Lacey Rose said.

“I don’t think he was nervous,” Stewart said. “It’s not like he doesn’t know what I’m going to say. Listen, how it got to be that if it was a scientific accident, it’s conservative, and if it came from a wet market, it’s liberal, I don’t know — I’m just not sure how that got politicized. But it was an inelegant way to get to a bit that I’ve done for years, which is our good-intentioned brilliance will more than likely be our demise. The bit is about the last words that man ever utters, which are, ‘Hey, it worked.’ I guess I was a little surprised at the pushback.”

Stewart’s appearance went viral, as he likened the virus emerging in Wuhan to an outbreak of “chocolatey goodness” near the Hershey Factory in Pennsylvania. The Wuhan lab had known security concerns, and reports of sick researchers with COVID-like symptoms in 2019 has continued to stoke speculation that the virus did not originate from nature.

But while Stewart’s progressive comedy made him popular with Democrats and mainstream media during his 16-year run at “The Daily Show,” some journalists and viewers scolded him for supporting the theory on Colbert’s show. Disgraced former CBS News anchor Dan Rather called Stewart’s rhetoric “dangerous and shortsighted,” Washington Post columnist Paul Waldman fumed that “celebrities” shouldn’t be considered reliable sources of information, and Forbes rounded up viewers uncomfortable with Stewart’s words. 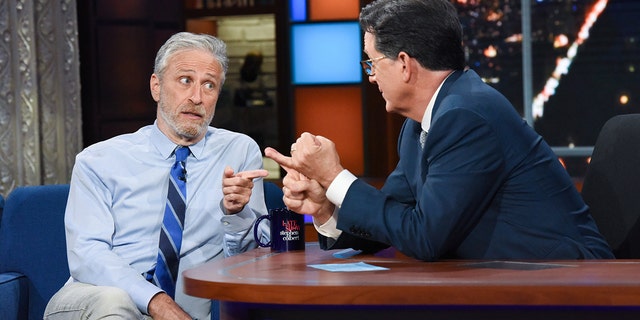 The re-emergence of the lab-leak theory as credible or likely after being declared implausible and “debunked” by fact-checkers and media reports in 2020 has led to yet another reckoning for the press on groupthink and bias issues.

Some reporters even acknowledged that support for the lab-leak theory from Republicans like Donald Trump, Mike Pompeo, and Sen. Tom Cotton, R-Ark., played into why it was initially dismissed in the media.

President Joe Biden ordered an intelligence review of the virus’ origins, and the 90-day investigation came back with inconclusive findings last month, citing in part China’s unwillingness to cooperate. Chinese state media has strongly denied the lab theory and even promoted the notion that it came from imported “frozen food.”

Colbert, a staunch supporter of Democrats, appeared uncomfortable with Stewart’s take, at one point quipping he sounded like a lackey for Sen. Ron Johnson, R-Wis. However, Stewart said in the interview that Colbert knew what he was going to say ahead of time.