If we are asked to predict what the world will be like in 10 years, the natural impulse is to look towards Silicon Valley. The technology cluster in a small stretch of California is home to Apple, Facebook and Google (and joined in spirit by Amazon and Microsoft further up the United States west coast) and has long been seen as a petri dish of innovation, the place where the future is built and the biggest riches made. 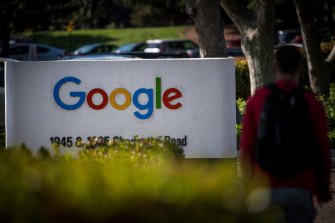 Google once seemed unique, dedicated to channeling its profits into myriad hard problems, but it now seems focused on making ever more money from advertising.Credit:Bloomberg

The riches are there. As I moved to San Francisco in the summer of 2018, Apple became the world’s first company to hit a $US1 trillion ($1.3 trillion) valuation, and tech’s big five were worth a combined $US4 trillion.

Three years later, that figure has more than doubled, to $US8.25 trillion ($10.7 trillion). Eight of the world’s 11 richest people owe their fortunes to Silicon Valley companies.

The companies’ impact on society is indisputable as well. That much is evident any time you look at a train carriage full of smartphones or the swarms of Amazon vans on our streets. Largely, this has been a good thing: instant communication, next-day delivery and answers at the end of a search query have all made our lives easier.

But at the same time, it is impossible to escape the feeling that Silicon Valley’s particular breed of innovation is missing something. Their inventions have disproportionately centred around the distribution and consumption of content, and the facilitation of commerce.

Apple achieves technologically-impressive feats of design and engineering in its devices with ever-better cameras and processors, but much of it is in the service of these other things.

Google once seemed unique, dedicated to channelling its profits into myriad hard problems such as reversing ageing and building better telecoms networks. But the company now seems to be going in the opposite direction, shutting down expensive projects such as internet balloons and energy-generating kites and focusing on making ever more money from advertising.

These are great businesses, of course, and not easy ones to build. The inventions that Silicon Valley has brought us should not be dismissed. The ability to video chat with somebody on the other side of the world in real time for free, or to access the world’s knowledge on a hand-held device, was the stuff of science fiction a generation ago.

But observing the resources at the tech titans’ disposal, we might reasonably ask if more could be done. Despite an abundance of computing power and data, labour productivity, wages and life expectancy have flatlined in recent years.

If Silicon Valley wants to save itself, it can start by changing the world.

Silicon Valley has precious little to say about the great challenges of our time: climate change, the increasing prices of healthcare and education, the cost of housing.

To say we live in an age of technology is to say that a group of technology companies have become the richest, most influential, entities on earth. It does not mean they have created an age of abundance, besides possibly an abundance of distractions.

Part of the reason Elon Musk is so feted is because he is a rare example of a tech entrepreneur focused on the world of hard problems, of atoms rather than bits: his modern space rockets and electric cars are big projects that have required huge sums of capital.

The resources for similar projects are there, if only other companies have the will. Apple has more than $US200 billion in cash – not far off the cost of the Apollo programme, adjusted for inflation. Amazon can borrow at interest rates equivalent to the US Treasury. 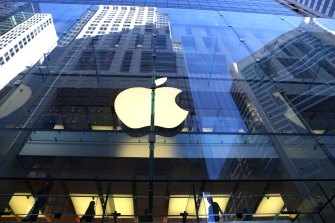 Apple has a cash pile of around $US200 billion.Credit:James Alcock

These businesses are under no obligation to chase grand projects, of course, but it may also benefit them. It is possible that the reason tech companies are under such immense regulatory and public scrutiny is that they have failed to demonstrate what their riches could achieve: without a positive vision of change, they are seen as subjugators of democracy, or rent-seeking monopolists.

When politicians and campaigners shout “break them up”, Big Tech does not have a compelling argument about what would be lost if this happened.

The good news is that there is a way out of this. Silicon Valley can deploy its immense resources to tackle bigger challenges. There are signs that this is already happening. Apple’s smartwatch is evolving from a miniaturised smartphone to a doctor on the wrist. Google’s artificial intelligence lab, DeepMind, last year achieved a breakthrough on a protein folding problem that could pave the way for new drugs. Self-driving cars will get here, albeit more slowly than once thought. Next month, Jeff Bezos will blast off into space on a rocket funded by his Amazon billions.

These ideas will not come without pushback. If the world’s biggest companies stretch into vital parts of public life, it will provide ammunition for critics who say they are too powerful. Just look at how regulators reacted when Facebook announced plans to introduce its own cryptocurrency, or the response when Amazon secures an NHS contract. The more important the work, the more regulation it invites.

But done right, this could also be the path to redemption for a group of companies in great need of it. If Silicon Valley wants to save itself, it can start by changing the world.