Crown Resort's $2.4 billion new casino and hotel, which over the past four years has risen 275 metres from the banks of Barangaroo to become Sydney's tallest building, will open its doors early next year.

But while this vast achievement of structural and political engineering – which James Packer has said will be his "gift" to Sydney – approaches it apex, another carefully constructed facade has been cracked over the past two weeks. 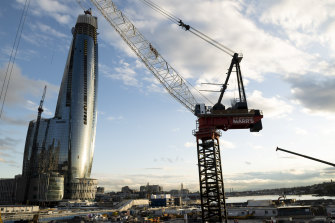 Crown’s $2.4 billion casino and hotel is now Sydney’s tallest building. But the company’s credibility has come under attack. Credit:Rhett Wyman

An unprecedented probity inquiry with the same powers of a royal commission has laid bare the facts of Crown's business dealings with figures linked to organised crime, and its failure to stop its Melbourne and Perth casinos from being used to launder dirty cash.

During four and a half days of evidence given via video link, Crown's chief legal officer and top anti-money laundering officer Joshua Preston gave evidence that the casino ignored repeated red flags about how it operated and who it went into business with.

The NSW Independent Liquor and Gaming Authority launched the inquiry in the wake of a damaging expose published a year ago by The Sydney Morning Herald, The Age and 60 Minutes.

Crown and its board responded furiously to the reports, publishing a full-page ad in rival newspapers calling it a “deceitful campaign” containing "unsubstantiated allegations… and outright falsehoods".

But that response, also sent to investors via an ASX release, could come back to bite Crown and its board, which is loaded with corporate heavyweights including Jane Halton, Harold Mitchell and its now chairman Helen Coonan.

Time and again Commissioner Patricia Bergin, SC, and her counsels assisting returned to the advertisement and used it to test Crown's credibility as they decide whether it is a suitable holder of Sydney’s second casino licence.

"I suppose when you go on the front foot… it is necessary to make sure that [your opponent's] Achilles heel is exposed before you do it, isn’t it?" the former NSW Supreme Court judge Bergin proposed after one bruising examination.

The inquiry heard Crown was warned as far back as 2016 in two due diligence reports that its biggest junket partner, Alvin Chau and his Suncity operation, appeared to be a former member of the 14K Triad in Macau and that the US government considered him to have criminal links. 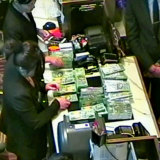 Suncity’s private gaming room at Crown Melbourne was described as “an island of immunity”.

Junkets bring hyper-wealthy Chinese gamblers to overseas casinos, give them credit to get around strict controls on moving cash out of China, and then collect their debts when they return home. The system brings in hundreds of millions of dollars for casinos like Crown every year, but is also vulnerable to being used to clean and move dirty money.

Despite the warnings, Crown gave Chau a private gaming room at its Melbourne casino, which counsel assisting Naomi Sharp, after showing a video of Suncity staff exchanging an Aldi cooler bag full of cash for casino chips, said was an “island of immunity” from Crown's anti-money laundering controls and reporting obligations.

Crown eventually closed Suncity's exchange desk after it discovered $5.6 million of cash stored in a cupboard in March 2018. Such an inordinate amount of cash, Preston said, sent "money-laundering alarms ringing".

Yet none of those events, nor the reports by this masthead about Chau's underworld links and that Home Affairs banned him from visiting Australia, prompted the Crown panel that approves junkets to review their business relationship. Preston said he had more recently suggested they review the partnership, based on the "holistic history" of Mr Chau, who closed his private room last year.

The Star Sydney also continues to work with Suncity, the inquiry heard, with its chief casino officer, Greg Hawkins, saying all he had read about Chau was speculation. "I’ve nothing to validate it", he said.

After a prolonged grilling, Preston acknowledged the "apparent link" between two former junket partners and an international drug syndicate known as The Company, which used Crown to launder drug money.

The board claimed that it "had no dealings or knowledge of any organisation of that name or description". Preston repeated that claim in a written submission to the inquiry in March.

But Sharp laid out a meticulous paper trail of publicly available court documents and media reports, which connected the syndicate to a former Crown junket operator, Roy Moo, who was convicted in 2013 of laundering $682,000 of drug money through Crown Melbourne. 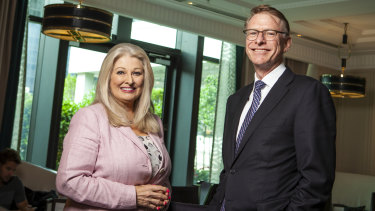 Another partner, which Crown paid to arrange for triad bosses to gamble at its Perth casino in 2015, was identified in the report as the "Hot Pot junket". Internal Crown documents showed that its junket partner Ng Chi Un owned a Hot Pot restaurant in Macau.

"Are you saying you didn't put those two things together?" Sharp quizzed Preston. "That’s a rather extraordinary oversight, is it not?"

"Not to my knowledge or that I recall", Preston responded.

Commissioner Bergin said it was clear there were "instances, well documented, of money laundering through Crown… where that money laundering has been linked by the courts to drug trafficking".

"So I suppose if you had your time over, you would like to do the exercise that Ms Sharp has done to ensure that the board was appraised of all these matters?" she asked.

"Having that information at hand would have been definitely relevant," Preston responded.

In the wake of last year's media reports, Crown's then executive chairman John Alexander said that Neil Jeans, from the consultancy Initialism, reviewed Crown's anti-money laundering systems in late 2018 and declared it "completely compliant" and "a gold star customer".

But the inquiry heard that major banks were at that time shutting down Crown banks accounts used by patrons to deposit and withdraw gambling money because of apparent large-scale money laundering.

ANZ Bank shut down one account in 2014 after detecting a string of cash deposits made at multiple branches across Perth. New Zealand's ASB Bank shut down another in 2018 after it asked Crown to "urgently answer" questions about its anti-money laundering checks. Crown did not respond for three months, according to evidence before the inquiry. And the Commonwealth Bank closed another local account in late 2019 following another string of large cash deposits.

Emails between Crown executives in January 2019 revealed they were running out of options given ANZ and ASB had shut them down and that "Chinese, European and US banks won’t go anywhere near" the accounts.

Counsel assisting Scott Aspinall put to Preston that the banks' refusal to deal with Crown, and the fact Crown continued to open new accounts that accepted high-risk, anonymous cash deposits despite the banks' warnings, showed that its anti-money laundering controls were "completely inadequate".

"Based upon the transactions through the accounts that we saw day after day, month after month, wasn’t it clear that Crown’s policies were either ineffective to detect and stop money laundering or that Crown was turning a blind eye?" he asked.

"It was not turning a blind eye to it," Preston responded. "There are weaknesses that have been observed through looking at the transactions. I accept that."

Preston said Crown monitored the accounts and would have reported suspicious activity it identified to AUSTRAC. But it had no obligation to report the suspect transactions.

That was because Crown opened the accounts through two holdings companies, with Crown's now-chief executive Ken Barton and casinos boss Barry Felstead as directors, and did not register them as "reporting entities" with AUSTRAC because, in Crown's view, they were not a "gambling service".

Preston agreed that naming the shell companies and accounts Riverbank Investments and Southbank Investments also created a "vulnerability" that they would be used for money laundering or theft by disguising the fact money was being deposited into a casino account.

The commission has the power the strip Crown of the licence for its new casino. That would be an extraordinary outcome. But based on the evidence presented so far, it appears something will have to give.

At the very least, the "risk based" regulation system used in NSW and Victoria, where casinos largely police themselves and can approve their own junket partners under a framework signed off by government is in the commission's sights.

"This inquiry is looking not only at Crown but to the future," Commissioner Bergin said after going through the string of suspect transactions in Crown-controlled bank accounts. "If this were to happen again, it would be unthinkable… wouldn’t you think?"

The inquiry will continue with further public hearings yet to be announced.