Early signs are emerging that investors are starting to take a fresh look at Australia’s large iron ore exporters – and through a rosier lens.

The three big producers, BHP, Rio Tinto and Fortescue have spent most of the past month looking decidedly unloved – their stock prices have fallen 18 per cent, 16.7 per cent and 25 per cent respectively since their January peaks.

Compared to the 4 per cent fall in the price of iron ore and it's easy to see why analysts are starting to reassess the China impact. 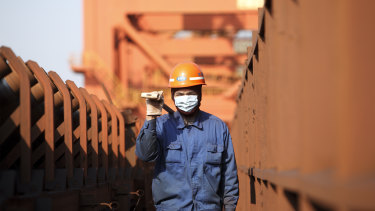 Have the big iron ore miners been oversold?

The miners were hit early and hard in the first wave of negative sentiment despite the fact that when they reported first-half profits in February there had been no evidence of slowing demand out of China.

But there were warnings particularly from BHP that unless China contained the epidemic on its shores by the end of March, the outlook could deteriorate.

If the information coming out of China that growth in the viral spread has peaked and the rate of new infections is declining can be relied on, then the optimists that were hoping the hit to China’s economy would be contained to the March and maybe the June quarters look to be closer to the pin.

It is true the damage to the world economy has a long way to play out and is surrounded by uncertainty. But increasingly the focus has moved away from China and towards other parts of the world.

Of course, just because the Chinese factories are slowly beginning to open and some quarantines are being lifted doesn’t mean that consumer demand will immediately bounce back. There could be a long tail to the recovery.

And if world economic growth is hit then China’s exports will also be dented. It won’t be immune. But that is where China’s targeted stimulus should kick in, according to analysts.

A research note to investors from Macquarie quotes Rio saying it expected a major commodity stimulus in response to the demand impact. "Rio noted that larger blast furnaces have been operating as normal, with the risk in the near-term around smaller operations and speed at which people return to work," Macquarie said.

Inventories of steel in China remain high but Macquarie believes steel mills will continue to produce as normal and the rise in demand should be able to consume the excess inventory.

Amid a sea of red ink on the local sharemarket on Wednesday, Rio and Fortescue provided a small oasis of green, each up about 1 per cent. BHP was down about 1 per cent but still outperformed the broader index, which fell 1.7 per cent.

While it has been a slow start to the year for the iron ore exporters the reasons appear to have little or nothing to do with China demand. Rather, weather and port-related disruptions account for a decline in February.

It is too early to predict with any certainty whether the iron ore miners have had a narrow escape from COVID-19 but if they have then their shares now appear to have been oversold. Macquarie issued an outperform on Rio and BHP and declared Fortescue its favoured pure iron ore play.

Meanwhile, contained in UBS’ extensive coverage of COVID-19- impacted stocks Fortescue featured heavily as one that had been oversold. UBS also highlighted the likelihood of the Chinese government introducing "commodity-intensive stimulus" to soften any economic downturn.

(The 65 per cent payout ratio may be conservative given the ratio was 80 per cent in the 2019 financial year.)

"Channel checks indicate iron ore shipments are continuing as per normal, with port inventory drawn down last week as rail remains in operation and truck drivers returning to work post lifting of restrictions.

Given supply problems still exist from Brazil’s Vale, the view is that iron ore prices should continue to sit above $US80 for the remainder of the calendar year.