It is just under three weeks since Qantas slashed capacity to Asia and the Tasman to contain the earnings damage inflicted by coronavirus – an amount which in mid-February the airline estimated to be between $100 and $150 million.

But three weeks is a lifetime when the spread of the virus around the world is changing daily if not hourly.

Qantas chief executive Alan Joyce made no guarantees about the future when he announced the first of the airline's capacity cuts on February 19. On Friday Qantas took another knife to Asian capacity – this time involving deeper cuts to its Japan routes including Tokyo, Sapporo and Osaka as well as additional groundings of flights to Hong Kong and across the Tasman until the end of March. More changes are expected, the company said. 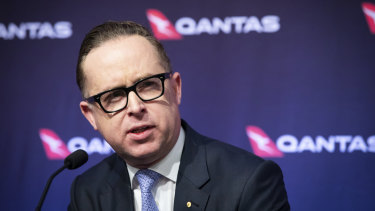 Qantas CEO Alan Joyce said the airline would take a significant hit from coronavirus but could weather the storm. Credit:Renee Nowytarger

Airline sources are suggesting the next round of Qantas cuts could see the grounding of six of its A380s – which are the largest planes in its fleet and fly to London via Singapore. This route could be serviced by smaller aircraft.

Virgin, which last week outlined cuts to international routes such as Hong Kong and a 3 per cent cut to capacity, hasn’t any immediate plans to further cut routes or frequency but said it was being monitored daily. Virgin is more limited in the levers it can pull on international capacity given it carries passengers to fewer destinations. However, there is an expectation that Virgin may defer its scheduled inaugural flight to Tokyo on March 29 if the situation further deteriorates.

Both airlines are also now starting to see the effects of increasing bans on corporate travel in Australia as companies grapple with the safety of their staff. Business is a lucrative segment for both airlines and its shrinkage will hit earnings hard.

The coronavirus is expected to cost the global airline business about $170 billion -with Asian carriers the hardest hit at this stage. When Virgin reported its earnings last week, it was clear the airline was going to capitalise on the exogenous coronavirus shock to fast track its plans to cut a swathe through its cost base, including reducing staff, simplifying its fleet and reviewing its route structure.

In Qantas’ case, the potential has emerged for the airline to make headway with its strategy to fly non-stop to New York and London from Australia’s east coast – a project known as ‘Sunrise’.

Joyce’s plans to launch Sunrise have been fraught with industrial relations issues as international pilots have fought hard against Qantas’ enterprise bargaining agreement and the company's attempts to achieve productivity gains. Pilots have argued for months this represents a diminution of pay and conditions.

But there are early signs that coronavirus-related fears have resulted in a change of heart by some pilots and there is an increasing chance they will vote in favour of Qantas's offer when they go to the polls in two weeks. Qantas threatened to outsource pilots to fly the Sunrise routes if the pilots did not accept the company’s offer.

Meanwhile, pilot sources are suggesting the negotiations between the Australian and International Pilots Association and Qantas have been handled badly by the union. Some pilots predict there will be a call from some members for a vote of no confidence in AIPA president Mark Sedgwick given the union at no stage issued Qantas management with a log of claims.

In a letter to members this week, seen by The Sydney Morning Herald and The Age, Sedgwick said: "We have run a firm industrial campaign and tested the company timeline and target to maximise the terms and conditions on offer for the A350. Ultimately, however, the outcome on this will not be decided by me or the AIPA exec but firstly by the CoM [committee of management] in its recommendations to members and then by the membership."

In a second letter – this time from the vice-president of the AIPA Brad Hodson – he reluctantly encourages members to accept the Qantas deal despite its shortcomings. “We are faced with choosing between paths that we really do not like. I understand the disgust and willingness to fight. I am of the view that the best way to fight this is to stay in the tent, accept the deal, stay united and give the pilot body the opportunity to find a better way sometime in the future."

"Like all Qantas pilots I am thoroughly disgusted by the threat to outsource A350 flying."

There are also concerns among Qantas workers that if the damage caused by COVID-19 continues the company could seek to impose a staff pay freeze. It has done so in the past three times – the first was in the wake of the 9/11 terrorist attacks, another was during the global financial crisis. To date, in response to the epidemic, Qantas has called on its staff to take holidays and long service leave.

But investors remain understandably fearful about how much uglier it will get for Qantas and Virgin before it starts to get better. Qantas shares have tanked from a February high of $6.67 to $4.73 on Friday, while Virgin have slumped from 14 cents to 9 cents.