Hong Kong (CNN Business)Hong Kong’s leading TV broadcaster will not air the Academy Awards next month for the first time in more than half a century.

Television Broadcasts Limited (TVB) has been home to the awards in Hong Kong since 1969. Its decision not to broadcast the ceremony this year was “purely a commercial decision,” a spokesperson said.
But the decision to drop the Oscars comes as two nominees — “Do Not Split,” a documentary about the pro-democracy protests in Hong Kong, and Chloe Zhao, who wrote and directed the drama “Nomadland” — face heated criticism in mainland China. Citing anonymous sources, Bloomberg reported earlier this month that China’s propaganda department ordered all local media outlets not to broadcast the ceremony live and to downplay coverage of the awards.

Hong Kong has several other major local broadcasters, including Now TV, Cable TV, Viu TV and Open TV. CNN Business has reached out to all four for comment. Open TV said it doesn’t have the broadcast rights to the awards show. It wasn’t immediately clear whether one of the others has acquired them.

Zhao, who was born in China, recently made history as the first woman of Asian descent to win a Golden Globe for best director. Her film “Nomadland” is nominated for several Oscars, including best picture, best director, best actress and best adapted screenplay. 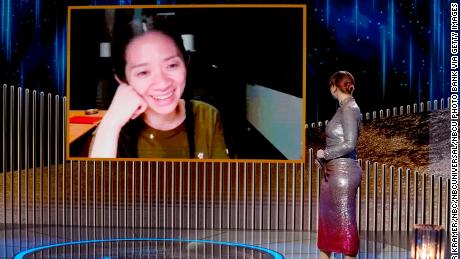 Zhao was initially hailed in Chinese state media as the “pride of China,” but the mood shifted after a 2013 interview that she gave to US-based “Filmmaker” magazine surfaced on social media. During the interview, Zhao said she grew up in China where “there are lies everywhere.” Some Chinese social media users questioned whether Zhao could still be considered Chinese, given her remarks and her ties to the United States and the United Kingdom, where she was educated.
Promotional materials for “Nomadland,” along with the hashtag for the film, have been removed from social media platforms in China, according to the Global Times, a state-owned tabloid.
Meanwhile, there has barely been any coverage of the documentary “Do Not Split” in Chinese state media or social media, which are heavily censored and vetted by the government.
The film, which is nominated for best documentary (short subject), chronicles the mass protests in Hong Kong that erupted in 2019 over an extradition bill. The demonstrations eventually evolved into a movement calling for full democracy.
In the year since then, the Chinese government has tightened its grip over the former British colony, and passed a sweeping national security measure last summer that banned sedition, secession and subversion against Beijing. The bill may already be having a chilling effect on free speech in Hong Kong, as journalists and their sources have grown increasingly wary they could be prosecuted.

China has also stepped up efforts to curtail democracy in the city, including passing a new law on Tuesday that slashes the number of directly-elected seats in the Hong Kong parliament and further entrenches Beijing’s power.
TVB became a source of controversy itself during the protests in 2019, when it was criticized by protesters for what they saw as pro-government bias. The company said at the time that it has “always maintained neutrality, professionalism and objectivity in its news coverage.”
Source: Read Full Article