Rep. Charlie Crist is the latest House Democrat heading for the exit.

“Florida should be a place where hard work is rewarded, justice is equal, and opportunity is right in front of you…and that’s why I’m running for governor,” the congressman and former Florida governor said Tuesday as he launched a campaign to seek his old job steering the Sunshine State.

Crist becomes the latest House Democrat to seek statewide office rather than run for reelection in the 2022 midterms, when the Democrats will try to hold on to their razor-thin majority in the chamber.

There may be many more to come.

Democratic Reps. Ron Kind of Wisconsin, Conor Lamb of Pennsylvania and Stephanie Murphy of Florida are mulling Senate bids next year. And fellow Democrat from Florida Rep. Val Demings is considering a run for Senate or joining Crist in the battle to take on GOP Gov. Ron DeSantis.

As Democrats face historical headwinds – the party that controls the White House on average loses roughly 25 House seats in the ensuring midterm elections – and a once-in-a-decade reapportionment and redistricting process that will favor the Republicans over the Democrats, a growing group of House Democrats is retiring altogether.

Rep. Cherie Bustos of Illinois last week announced she’ll retire from Congress rather than run for reelection next year in a battleground district. Two other House Democrats who represent competitive districts, Reps. Filemon Vela Jr. of Texas and Ann Kirkpatrick of Arizona, announced their retirements earlier this year. 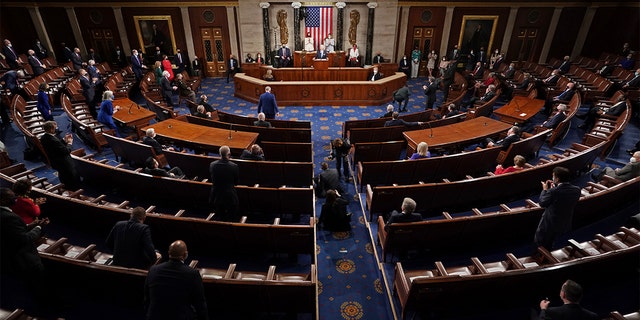 A veteran Democratic strategist who works on House races says a lot of House Democrats facing challenging reelections “are looking at the map and saying after redistricting happens, ‘Will I really have a fighting chance and do I want to stick around?'”

“There’s not a lot of upward mobility in the House of Representatives…and leadership’s very stifling,” noted the strategist, who asked to remain anonymous to speak more freely. “If you think you’re going to lose anyway, why not take the risk and run statewide or why not exit gracefully on your own terms.”

The exodus of House Democrats comes as the party defends its most fragile majority since World War II.

The GOP controlled the House for eight years before losing the majority in the chamber in the 2018 midterms amid a wave by congressional Democrats. But Republicans defied expectations and took a big bite out of the Democrats’ majority in November’s elections and only need to flip five seats in 2022 to regain control of the chamber.

“House Republicans are in a very strong position to win back the House next year,” veteran GOP consultant Brian Walsh emphasized.

And he highlighted that the current election cycle “is shaping up to be a potential repeat of what we saw in 2010,” when the GOP regained the House in a tidal wave election that came just two years after President Obama won the White House and Democrats increased their congressional majorities.

The House Republicans’ campaign arm on Tuesday added 10 Democratic lawmakers to its list of 47 seats held by what it considers to be vulnerable Democrats that it sees as potential pickup opportunities next year.

National Republican Congressional Committee (NRCC) chair Rep. Tom Emmer, R-Minn., touted that “Republicans are on offense all across the country” in unveiling the list.

The announcement came a week after the U.S. Census Bureau released initial numbers from the 2020 Census. The figures showed that GOP-controlled states, such as Texas and Florida, were among the states gaining House seats, while California, New York and Illinois, where Democrats control the levers of government, were among the states losing seats. All 10 new NRCC targets came from states that are losing a congressional seat.

Census data to be released later this year will determine the redistricting process, which is expected to also generally favor Republicans over Democrats.

House Republicans have been turning up the volume on their attacks on the Democrats’ massive spending measures – from the $1.9 trillion COVID relief package passed by congressional Democrats and signed into law by President Biden, to the president’s massive jobs and infrastructure measure proposal. And they argue that push by the president and Democratic leadership to advance these plans is a contributing factor in some House Democrats forgoing reelection.

“Vulnerable Democrats know their majority is doomed thanks to their toxic socialist agenda. We will continue to see the smart ones abandon ship before they lose in 2022,” NRCC spokesman Michael McAdams told Fox News.

But Democrats point to the popularity right now of their government spending programs and proposals in public opinion polling, and to an economy that’s roaring back after nearly collapsing amid the coronavirus pandemic.

“House Democrats are delivering for the American people. The American Rescue Plan is helping our economy rebound and crushing COVID by getting shots in arms, cash in pockets, safely reopening schools, and getting people back to work – no thanks to House Republicans who unanimously voted against the bill. We have a disciplined electoral strategy, record fundraising, and a party brand that’s focused on solving Americans’ problems and creating jobs,” Democratic Congressional Campaign Committee (DCCC) Chair Rep. Sean Patrick Maloney, D-N.Y., told Fox News.

And Maloney also emphasized that “House Republicans are entrenched in their own infighting,” as he pointed to the push by House GOP leaders to oust Rep. Liz Cheney of Wyoming – a vocal critic of former President Trump’s – from her number three leadership position.

But Walsh, a Republican campaign veteran, argued that “Democrats running in swing districts may want to rethink President Biden’s desire to have them run on a tax-and- spend agenda.”

And pointing to history, he stressed that “House Democrats would do well to remember the lessons of the 2010 election cycle, where they similarly faced difficult headwinds and tough a political environment and they still doubled down on big government legislation.”