Workers affected by the coronavirus outbreak may soon be able to take advantage of the first nationwide paid leave program in the U.S. if Congress can agree on the plan.

Late Wednesday, House Democrats unveiled a big legislative package to address the public health and economic threats posed by COVID-19, the disease caused by the coronavirus. The bill includes a government-funded program that would reimburse eligible workers who lost wages because they were unable to work during the crisis.

The bill also includes a provision that would establish a future nationwide paid sick leave program ― prompting howls of protest from Republicans.

Democrats and Republicans have been unable to agree on a federal paid leave program for years, but some form of the bill stands a chance of passing due to the damage the virus is doing to the economy. Many Republicans who’ve opposed such programs in the past agree something must be done to keep money flowing into workers’ pockets as business slows.

How the plan would work:

The bill includes provisions for 14 days of emergency leave for workers who are either diagnosed with COVID-19 or quarantined because of the virus. Crucially, workers would also qualify if they must care for others who are sick or stuck at home, including because of school closures.

The benefits would be administered and paid directly to workers by the Social Security Administration, and capped at two-thirds of a person’s monthly earnings, not to exceed $4,000. If a worker already receives sick leave benefits from their job or state government, they would still be eligible for the new federal benefit minus what they’re already receiving.

Workers can apply for the reimbursement retroactively, meaning people who are already quarantined or missing work to take care of someone would be able to receive a later payment for their time off.

The plan differs from earlier proposals in that it creates temporary, emergency funding specifically to deal with the coronavirus. It also includes a permanent mandate that employers provide sick leave in the future.

Under the bill, employers would have to let workers gradually accrue up to seven paid sick days per year. Those days could also be used to care for family members who are sick, or deal with domestic violence-related issues.

Employers would also be required to provide 14 days of sick leave immediately in the event of a public health emergency like the current one. Large employers would have to pay for those 14 emergency days, while smaller employers (defined as 50 or fewer workers) would be reimbursed by the government.

The potential problem with including permanent paid sick leave in the package is that it could hinder the bill’s passage and “gum up the works,” said Claudia Sahm, director of macroeconomic policy at the Washington Center for Equitable Growth.

“I have concerns it’ll slow down the process and more people will get hurt than need to get hurt,” Sahm said.

Those parts of the plan are already drawing real pushback from Republicans, who generally hate employer mandates. Democrats proposed an emergency sick leave plan last week that included those provisions, and Sen. Lamar Alexander (R-Tenn.) spoke out against it on the Senate floor Wednesday and prevented it from being fast-tracked.

Alexander said he was open to a paid sick leave program to deal with coronavirus and thought it was a “good idea.” But he said the government should have to foot the bill, not employers. “Employees are struggling, our employers are struggling, and it’s not a cure for the coronavirus to put a big new expensive federal mandate on employers,” he said.

It’s possible Republicans like Alexander would support an emergency fund but demand that the permanent mandate be dropped from the House package. A spokesperson for the senator said Thursday that he had nothing to add beyond his comments on the Senate floor.

Proponents of paid leave programs were happy to see a potential deal coming together, even if the final details weren’t clear.

“This is an extremely substantial step toward addressing the very real and immediate needs of this emergency and setting up a system for paid sick days for the future so people won’t face this risk again,” said Vicki Shabo, a senior fellow at The New America Foundation and paid leave expert.

Some economists worried that the funding provisions for the plan would prove too complicated to enact quickly. “It might take a while to get set up,” said Jay Shambaugh, director of the Hamilton Project. He suggested giving companies a tax break to offset the cost.

The bill does say that small businesses would be compensated for the costs of providing 14 days of emergency leave. 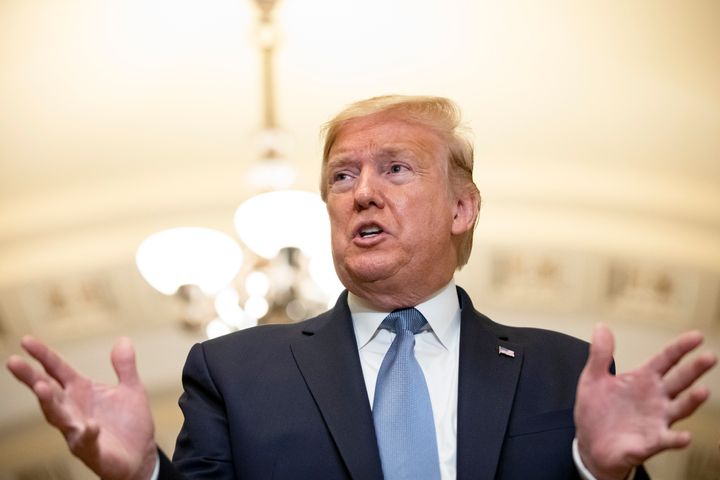 The House is scheduled to vote on the bill on Thursday, which will likely pass with mostly Democratic support. House Minority Leader Kevin McCarthy (R-Calif.) called the legislation “completely partisan” and “unworkable.”

It’s not clear if the bill can get through the Senate. Majority Leader Mitch McConnell (R-Ky.) said Thursday morning that the Democratic bill is “an ideological wish list that was not tailored closely to the circumstances.”

Regarding the paid leave provision, McConnell said “the proposal appears to impose permanent unfunded mandates on businesses that could cause massive job losses and put thousands of small businesses at risk.”

Thursday could be the last day to pass legislation before lawmakers leave Washington for a planned recess next week.

“To ensure that working Americans impacted by the virus can stay home without fear of financial hardship, I will soon be taking emergency action, which is unprecedented, to provide financial relief,” he said. “This will be targeted for workers who are ill, quarantined, or caring for others due to coronavirus.”

The administration, however, hasn’t offered any detail. A White House spokesman could not provide any as of Thursday morning.

The fact that the U.S. has no national paid sick leave policy has become a huge issue during the coronavirus crisis, shining a light on a safety net gap long highlighted by Democrats and progressives.

The lack of paid sick leave is an urgent problem for low-income workers in the service industries, who are particularly at-risk during the current crisis.