Australia's biggest miner, BHP, will pay $125 million in extra taxes after the nation's highest court upheld a ruling that the company should pay tax on profits earned by its Singapore marketing arm from selling commodities dug up in Australia.

The case centred on whether BHP should have paid so-called "top-up tax" on profits made by its Singapore marketing hub from the sale of coal from the Mt Arthur mine in Australia, which is owned by the British side of BHP's dual-listed structure, BHP Group. In a 5-0 judgment, the High Court determined commodities purchased from BHP's Australian entities should be included in its tax assessment because those entities were "associates" for the purposes of tax laws. 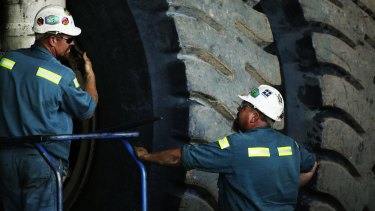 Workers at BHP’s Mt Arthur coal mine: The tax office argues that profits on commodities dug out of the ground in Australia should be subject to the local tax and royalty systems.Credit:Louie Douvis

The decision brings to an end a long-running dispute between the tax office and the mining giant over the company’s marketing business in Singapore.

The tax office on Wednesday welcomed the ruling, saying it set a precedent to assist the ATO in efforts to ensure other multinationals paid their "fair share of tax in Australia".

"This case highlights the commissioner’s continued commitment to protecting the Australian tax base and willingness to hold large well-resourced multinationals operating in Australia to account to ensure that those multinationals pay their fair share of tax in Australia rather than diverting profits offshore to no-tax or low-tax jurisdictions," ATO deputy commissioner Rebecca Saint said.

The ATO argued that profits on commodities dug out of the ground in Australia must be subject to the country's tax and royalty systems, regardless of where they are sold from.

A BHP spokesman on Wednesday said the ruling provided clarity on the interpretation of a "technical area" of Australian federal income tax rules.

"It means that BHP will pay a total of approximately $US87 million ($125 million) in additional taxes for the income years 2006 to 2018," he said. "BHP is one of the largest contributors to the Australian economy, having contributed approximately $71 billion in taxes and royalties over the past 10 years."

The additional taxes that BHP will pay as a result of this decision represent less than 0.2 per cent of this contribution, the spokesman said.

The ATO has never sought to apply the general anti-avoidance provisions in the Tax Assessment Act in this issue.