Guru Gowrappan, a former Alibaba executive who took the helm as Verizon Media’s CEO last year, wants to diversify revenue so that ad sales, subscriptions and transactions are roughly equal in size five years from now. Creating Yahoo Mobile is part of that plan, he told CNN Business.
Yahoo Mobile operates on Verizon’s 4G LTE network and offers unlimited talk, text and data for $39.99 per month. Customers will get a free Yahoo ad-free mail service account, which normally costs around $40 per year. The service is available for purchase online and can be used with iPhone and Android devices. 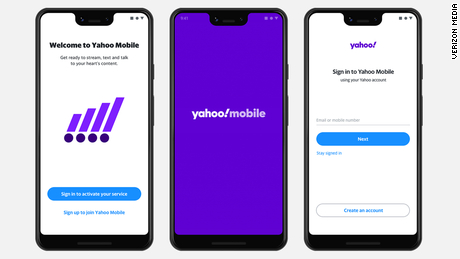 Yahoo remains a “really trusted brand” and Verizon (VZ) has the “best network in the United States,” Gowrappan said. That’s why he believes combining the two makes sense. Yahoo remains a popular information destination for sports, news, entertainment and it’s getting into a sports betting.
“It’s a customer segment that we have that wants content and wants to interact, so it makes sense to expand it,” he said.

Yahoo garnered around 182 million unique US visitors in February, according to Comscore. That makes it among the most popular websites in the world. The aging brand still has value to Verizon because it’s using Yahoo’s reach to build an ad network to compete against Google. Yahoo’s content properties help the brand differentiate itself from Google.
Gowrappan said Yahoo Mobile could expand with more plans within the next year that are tailored to its fans’ passions, perhaps including a phone with free access to Yahoo Finance’s premium service or a sports betting plan with personalized offers.
Verizon acquired Yahoo in 2017 and grouped it under its media brand, formerly named Oath. The collection includes other well-known web properties including HuffPost and TechCrunch. Now named Verizon Media, the company has struggled in its short existence. It has gone through layoffs and a $4.6 billion writedown that valued the unit at around $200 million.
Yahoo Mobile faces a “very challenging” launch because of its limited distribution opportunities and the lack of plans, said Alex Besen, founder and CEO of the Besen Group, which analyzes mobile phone companies. He said that Yahoo Mobile appears to be a competitor to Google Fi, a phone network that charges a flat monthly fee and operates on Sprint (S) and T-Mobile (TMUS) networks.

“Even Google is having a hard time sustaining its service,” he said. “Online distribution is good, but it’s not going to replace stores. It will be challenging for them to sign up subscribers.”
–CNN Business’ Michelle Toh contributed to this report.
Source: Read Full Article